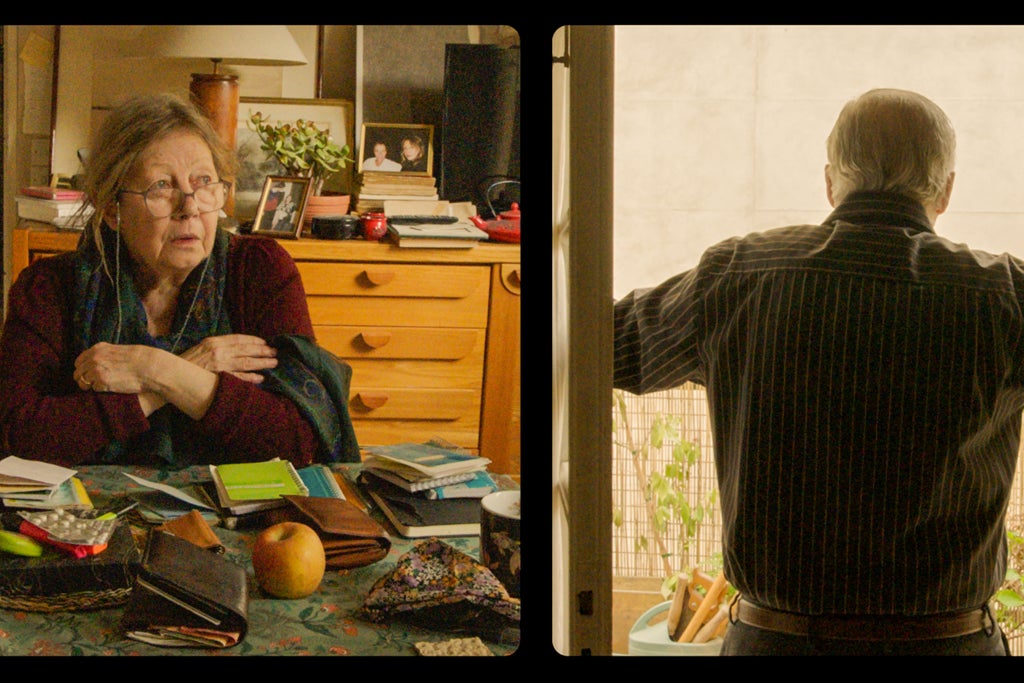 he most shocking thing about Gaspar Noé’s new film is that it’s not out to shock. European cinema legends Dario Argento and Françoise Lebrun star as a middle-class couple. An academic (“Lui”/Him) and one-time psychiatrist (“Elle”/Her), live side by side but rarely connect. This is mostly, but not entirely, because she has dementia. There are references to infidelity, as well as shots of an excrement-smeared loo and a man getting high. Yet mostly what the characters do, as we watch them on a split screen, is potter. This twisted romance, from the man behind I Stand Alone and Irréversible, moves at the pace of an especially sleepy snail, which is all part of its beauty.

In the Parisian flat where the couple live, books rear up from the floor like stalagmites. The woman buzzes around the cluttered space, sometimes like a bewildered blue bottle fly, sometimes like a vengeful god. With the flick of a wrist, she transforms domestic objects into agents of destruction. The husband, who has heart problems, is writing a book about dreams and cinema and, from what we can tell, it’s wise-sounding waffle. The wife certainly isn’t impressed and what she does to the manuscript made me laugh out loud. That is, until the husband sees what she’s done and starts weeping like a baby.

Vortex isn’t as blisteringly funny, or as profound, as The Father. It’s obviously indebted to Amour. But it’s in a different league to Still Alice. The acting is tremendous and the improvised script tantalising. Best of all is the impact of the split screen. As your eyes dart between the two characters, you realise the technique would work for the story of any intimates torn apart by a perception-warping disease.

And when the rules of the split-screen game change, the effect is more eloquent than any line of dialogue. In a crucial sequence, the wife, anxious but lucid, appears in both frames, during a pow wow between the couple and their concerned son, Stephane (Alex Lutz, a dead ringer for Johnny Flynn). The wife whispers that she’s a burden who’d be better off dead. The husband strokes her and says, “No, you’re with us – alive and talking… You’re not guilty.” For the first time since we’ve met them, the couple are able to present a united front, and you get why “Lui”, for all his terror and frustration, is loathe to be separated from “Elle”.

As in Darius Marder’s The Sound of Metal, problems don’t form an orderly queue. Stephane has an agitated little son, Kiki. Gradually, it becomes clear that Kiki is not in safe hands. Admittedly, the plot thread about the siren call of drugs (even the ones that mother gives you) becomes a tad contrived. But on the whole, Noe offers a fresh angle on human frailty.

The movie starts with a clip of a 21-year-old François Hardy, singing Mon Amie La Rose. From the second Hardy opens her mouth, we’re plugged into the tremulousness of life. Noé’s message: everyone (young or old) is hanging by a thread.

The 58-year-old film-maker shot this in lockdown. He may have bashed it out in a few weeks, but his two-screens-for-the-price-of-one fable is a true labour of love.