DOCTORS have discovered the symptoms of Covid that can last for two years or more.

Their research has shown that half of patients admitted to hospital are still likely to have at least one persistent problem two years later.

The study, published in The Lancet Respiratory Medicine, has the longest follow-up period of patients to date.

Researchers are only able to analyse what symptoms exist after two years given the coronavirus emerged in late 2019.

So it’s possible problems like fatigue and anxiety could stick around even longer.

Lead author Professor Bin Cao, of the China-Japan Friendship Hospital, China, said: “Our findings indicate that for a certain proportion of hospitalised Covid-19 survivors, while they may have cleared the initial infection, more than two years is needed to recover fully from Covid-19.” 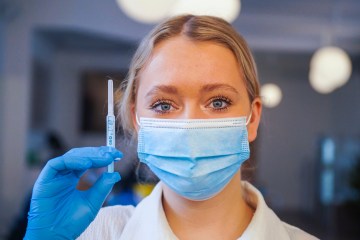 The study involved almost 1,200 patients, aged 57 on average, who were infected with the bug in the early phase of the pandemic.

They had all been treated in Wuhan, China, then assessed six months, 12 months and two years after discharge.

Researchers looked at their walking abilities, mental health, quality of life and more.

Covid patients were generally found to be in poorer health than those in the general population two years after infection.

Not all of those hospitalised were affected, however.

More than half (55 per cent) of participants had at least one symptom of Covid at two years, and were therefore considered “long Covid” patients.

The researchers then compared the long Covid group with the group of participants who had endured Covid, but gotten better.

Those with long Covid had more pain (35 per cent vs 10 per cent), and mobility issues (five per cent vs one per cent) than their fully recovered counterparts.

Some 13 per cent showed symptoms of anxiety and 11 per cent depression, compared with three per cent and one per cent in non-long Covid patients, respectively.

The researchers said it’s not possible to say whether problems like these are specific to Covid, or whether other hospital patients experience them.

Long Covid is defined as someone who still battles symptoms beyond four weeks in the UK.

Britain’s biggest ever EuroMillions jackpot of £184m is CLAIMED

It may be defined as ongoing Covid (four to 12 weeks), or post-Covid syndrome (more than 12 weeks) by medics.

The symptoms may include fatigue, a cough, breathlessness, muscle or joint pain, loss of taste of smell and brain fog.

2022-05-11
Previous Post: Mental health: new study finds simply believing you can do something to improve it is linked with higher wellbeing
Next Post: Eurovision: If Ukraine’s Kalush Orchestra triumph it won’t be a sympathy vote, says an expert