FORMER Chelsea and Tottenham manager Andre Villas-Boas could become the next Morocco coach, which paves the way for Hakim Ziyech’s return – reports suggest.

That is according to Le360, who report that the Atlas Lions’ boss Vahid Halilhodzic may soon be sacked and Villas-Boas is the favourite to replace him ahead of the 2022 World Cup.

Morocco chiefs have given Halilhodzic until Monday to respond to their proposal to reinstate the exiled trio of Ajax ace Noussair Mazraoui, Marseille loanee Amine Harit and Chelsea star Ziyech.

If the Bosnian tactician insists on excluding them then he will be relieved of his duties.

Villas-Boas, who has been out of a job since his dismissal from Marseille last year, is the likeliest successor and that means Mazraoui, Harit and Ziyech are on their way back to the national team.

The Blues’ winger announced his international retirement in February after falling out with Halilhodzic. 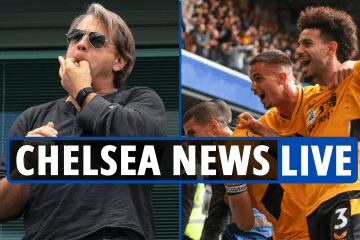 But Morocco’s FA boss Fouzi Lekjaa has pledged to have Ziyech and Mazraoui back in the fold in time for November’s finals.

Lekjaa said: “There are problems that need to be solved. We will do so in order for Ziyech and Mazraoui to return to the national team.

“They are still Morocco players, and two of the best in the squad. No-one can dispute how good they are.

“Problems can always arise in any group of 50 people. We will resolve them in the best way, so that the national team becomes the pride of all Moroccans.

“Vahid has our support for now, but nothing is set in stone. You can’t say that he is untouchable or irreplaceable. When the time is right we will make a decision about him.”

Villas-Boas joined Chelsea in 2011 after an impressive year with Porto that saw him winning a domestic double and the Europa League.

However, the Portuguese coach only lasted a few months and joined Tottenham in 2012 where he had more success until his exit a year later.

The 44-year-old went on to coach the likes of Zenit Saint-Petersburg, Shanghai SIPG and Marseille.