Local elections are about the most important issues affecting our daily lives – so why do they always become a referendum on the prime minister? 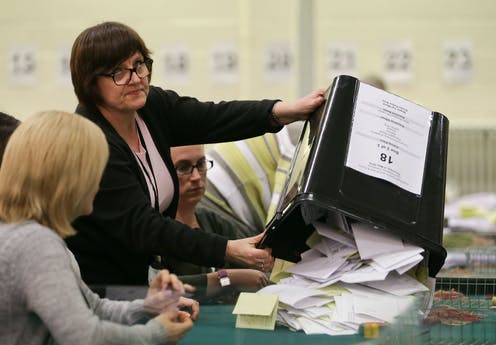 As the dust settles on another round of local elections in the UK, parties are seeking to spin the results to suit their own narratives.

For months, the May 5 elections had been framed as crunch day for Boris Johnson. A poor result was to be taken as a measure of public anger over a string of recent scandals and was repeatedly being framed as the last straw for angry MPs. A good result would be enough to save him – at least for the time being.

But the reality is that these were not votes for Johnson or indeed any member of parliament. Is it time to start resisting the urge to treat them as such – and might we all benefit from doing so?

Voters in England, Wales and Scotland were electing representatives who will make decisions affecting the services available in their local areas, and which are a huge influence on the quality of everyday life. Those representatives will set the rate of council tax, and decide where it gets spent – whether that is on local transport and bin collections, schools and health services, or investment in new housing and planning for climate transition. In England, this includes 32 London boroughs, 33 other metropolitan boroughs, 21 unitary authorities, 60 district councils, 1,000 parish councils and seven elected mayors (six in London and one in South Yorkshire). In Wales, 22 councils are up for election, and in Scotland, 32.

Yet despite their importance to the nuts and bolts of daily existence, local elections are treated as a de facto referendum on British people’s trust in the UK government.

This was particularly the case this year in the wake of Covid. The “partygate” scandals in which members of government, including Prime Minister Boris Johnson, were found to be repeatedly in breach of lockdown restrictions are ongoing matters.

At the same time, the rising cost of living is a particularly pressing concern. These issues were in evidence in media coverage of the votes as well as in the campaign literature of candidates. But this focus does imply that, really, politics is all about Westminster, and that is the only place where change can happen.

That might also explain why turnout at local elections is consistently low, averaging around 35%, unless they are combined with a general election year. In 2018, the lowest turnout was in Hartlepool with 24.2%, while the highest was in Richmond on Thames, with only 51.4%. That was enough to tell us that voters in poorer areas feel there is less point in trying to influence who makes their local decisions, even if it potentially affects their lives more.

The problem might come down to an information gap. The Local Government Information Unit (LGIU) has published data showing that 53% of respondents said they know little or nothing about what their local councillors actually do.

But another cause might be a more wholesale disconnect from the politics of “business as usual” – both national and local – which can be seen as being divorced from people’s everyday concerns, and their hopes and fears for the future.

While in Scotland, voters might turn towards the SNP, and in Wales, Plaid Cymru, in search of some sense of identity and direction, back in Hartlepool voters told the BBC in 2019 that low turnout there was partly down to “a belief that nothing would change, disillusionment with national and local politics and having ‘no one party that sticks out’”.

During research into local community participation in North Nottinghamshire as the New Labour era gave way to the Conservative-Liberal Democrat coalition following the 2010 election, participants told me that national party politics meant much less to them than it had to their parents and grandparents, and that when it came to the Conservatives and Labour, “you couldn’t get a cigarette wrapper between them”.

Local issues still meant a lot to people – the closure of a much loved leisure centre was enough for local people to oust Labour from the District Council – but deep disaffection with national politics was emerging. People felt that whoever you voted for, they all seemed to deliver the same diet – the casualisation of labour, public services being cut or contracted out, declining local town centres and the loss of regional identities. With hindsight, what was brewing was a sense of political disconnection which was to explode in the form of the 2016 Brexit vote.

Is this – national party politics and our frustrations with them – really what local elections are, or should be, about? Author Peter MacFadyen has argued the case for moving beyond party politics into what he calls “flatpack democracy”, where independents take over their local councils. In Frome, Somerset, this has been successful – last year, the town even elected its own independent “punk rock mayor”.

Whether that could be scaled up to work at the level of a metropolitan borough is a big question. But, in the meantime, the decisions made by voters in local elections continue to be painted as their way of giving the government of the day a bloody nose, instead of what they are actually doing or supposed to be doing – holding their local representatives to account on the things that matter to local people. No one benefits from the blurring of these lines.

Heather Watkins is affiliated with The Co-operative Party.