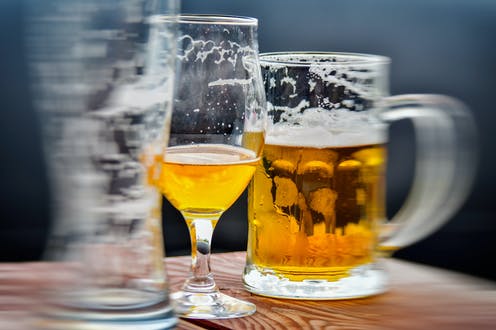 The UK business secretary, Kwasi Kwarteng, said that closing the bars in parliament would be “excessively puritanical” as a response to concerns about a culture of inappropriate and sexist behaviour in the UK’s House of Commons.

Overall, 29% of the MPs in our study engaged in what we would consider risky drinking.

Our study, conducted in 2020, aimed to explore risky drinking among UK Members of Parliament. A confidential questionnaire was sent to all 650 MPs, and 146 responded. We compared this group with the general population, as well as with corporate and non-corporate managers and those in other high-income groups.

MPs were more likely than the other groups to drink at least ten units of alcohol on a typical drinking day. Of MPs, 18% drank six units or more in a single drinking episode at least weekly – compared with 8% of the general population and between 10% and 12% for the other groups. One unit of alcohol is equivalent to half a pint of normal-strength beer, a small glass of wine or a single measure of spirits.

MPs were also more likely to feel guilty about their drinking daily or almost daily: 3% of MPs reported feeling this way compared with 1% of the general population and between zero and 1% of all other groups.

These drinking patterns were not associated with symptoms that suggested full-blown alcohol dependence, but these levels of drinking could escalate into more serious alcohol-related harm.

There was a higher proportion of women in our study than in the total MP group, and as women tend to drink less than men, this may mean that levels of drinking among MPs were underrepresented in our survey. The study is limited by small numbers that may well have shown significant differences in other measures of alcohol-related harm.

Drinking on the job

Free beer and wine is provided in the Belgian national parliament. A study of 150 Belgian MPs found that 59% drank more than one drink (1.3 UK units) a day. This is higher than the study’s comparison group of parliamentary employees and also higher than in our study.

In Australia, the government published a report at the end of 2021 on how to prevent and respond to bullying, sexual harassment and sexual assault in Australia’s parliament. It was based on interviews with 1,723 people, which included 147 current or former parliamentarians.

One of the recommendations of the report is a clearer and more consistent approach to alcohol policies in the workplace, so that availability is restricted to reduce harm from alcohol, and provision for opportunities for networking that do not necessarily involve drinking alcohol.

Between 2006 and 2016, the proportion of people in England who reported drinking at least once a week declined. But the most recent figures (from 2017) show that 28% of men and 14% of women in England still drink at levels showing an increased or high risk of alcohol-related harm. A high workload and high stress levels can lead to using alcohol to unwind after work, and this is associated with risky drinking.

Other professions with equally high levels of stress and unsociable working hour, such as medicine, do not permit drinking during working hours. It is increasingly evident that alcohol is not a feature of the modern workplace – and this should include the House of Commons.

Tony Rao does not work for, consult, own shares in or receive funding from any company or organization that would benefit from this article, and has disclosed no relevant affiliations beyond their academic appointment.