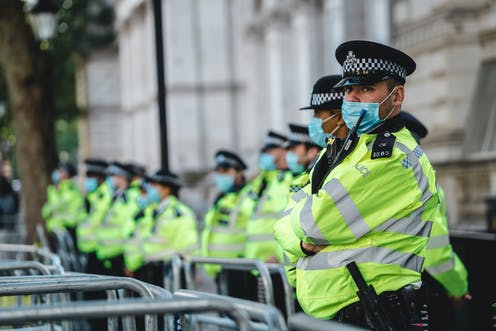 Police accountability is crucial to trust and confidence in the police. Quite what form that accountability should take, though, is a matter of debate.

Isolated incidents of excessive force may correctly be seen as culpable and requiring disciplinary action. Others might more appropriately be interpreted as indicating that training is needed. The question, then, is whether the aim of good and fair policing is best served by greater emphasis on officers being sanctioned or on them learning lessons.

In England and Wales, recent reforms to the police complaints and discipline system emphasise lesson-learning. However, as I have argued, the same reforms also give police professional standards departments greater autonomy and reduced the departments’ accountability for what lessons are learned and by whom.

In March 2022, the Home Affairs Committee published the report of its enquiry into police conduct and complaints. In supplementary written evidence to the committee, the Police Superintendents’ Association maintained that too great an emphasis on discipline within the police complaints and discipline system had created a blame culture. This, the association said, led to important lesson-learning opportunities being lost because officers are fearful of admitting mistakes. It drew a comparison with the airline industry where a no-blame, lesson-leaning ethos is hailed as having contributed to substantial improvements in passenger safety.

My own written evidence to the committee underlined the difficulty in making such a comparison. People choose to fly. By contrast, citizens lawfully going about their business do not choose to be stopped and searched, detained or subjected to the use of force. Additionally, nobody wants aircraft to crash. The very nature of policing, however, means there will always be potential disagreement about how officers exercise their powers.

How police deal with complaints

In England and Wales, the Independent Office of Police Conduct (IOPC) is responsible for ensuring public confidence in the complaints system. It has the power to independently investigate serious complaints involving, for example, death or serious injury. It also makes recommendations and promotes lesson-learning across forces.

But, the vast majority of complaints are still handled internally by police officers in the professional standards departments of each force. There, it is largely up to the department’s own investigator to determine the level of investigation. They also decide whether the case should result in a lesson-learning response or a disciplinary process.

Further, and with an almost Alice-in-Wonderland level of circularity, “misconduct” is in most cases defined as a breach of the standards of professional behaviour that is considered serious enough to justify disciplinary action. So, although there are some checks and balances, when deciding whether any given case warrants lesson-learning or sanction, police investigating officers have a high degree of discretion.

For example, one of the standards of professional behaviour for officers is that “police officers only use force to the extent that it is necessary, proportionate and reasonable in all the circumstances”. But a police officer working in a professional standards department is likely to have a different view of what is reasonable “in all the circumstances” to that of the average person.

This may be right. It may be impossible to judge an officer’s actions fairly unless you have stood in their shoes. But unless decisions of that nature are carefully monitored, the assessments made by professional standards officers are arguably as likely to entrench problematic police behaviour as they are to change them.

For this reason alone, giving police forces greater autonomy in dealing with complaints, as the recent reforms have done, is a questionable move. There is, however, another more pressing concern.

Lesson-learning requires a culture that is genuinely committed to treating complaints as opportunities for improvement. In contrast, studies repeatedly conclude that the police, and particularly police management have not demonstrated the ability to instil such a culture.

Thirty years ago, in his book Complaints Against the Police: The Trend Towards External Review, criminologist Andrew J. Goldsmith pointed to “an attitude of police mind which is affronted by the impertinence of the civilian in making a complaint […] and which then, in a defensive reflex, classifies him as a trouble-maker, or as being anti-police, or motivated by malice or ill-will”.

More recently in his 2014 review of the police disciplinary system in England and Wales for the Home Office, Major General Chip Chapman, an independent former army officer, noted a “values deficit” within forces. He found occasions when police behaviour was “defended at the expense of values” and raised concerns about a “lack of culture of challenging performance infractions at every level”.

This defensive cultural attitude has most recently been re-affirmed by the Home Affairs Committee. Its investigation found a “clear absence of urgency and a culture of non-cooperation from some forces involved in (complaints) investigations”.

The committee concluded that police forces needed to create a culture that would result in a “rapid, open and non-defensive response” to complaints. It specifically noted that this had be to established and led “from the top”, with the implication that this meant senior police managers.

It is sobering to recognise that these senior managers will have been junior officers 30 years ago. As such, they have risen through the ranks of an institution which has, during that period, repeatedly been found to harbour a culture that is, in truth, inimical to lesson-learning.

The line between lesson-learning or discipline has to be carefully determined, taking the nature and function of the police and the powers they wield into account. If police forces are to be truly accountable, they have to be open and transparent about where that line is drawn.

Clare Torrible has previously received UKRI impact funding.
She is a member of the IOPC Independent Stakeholders Group