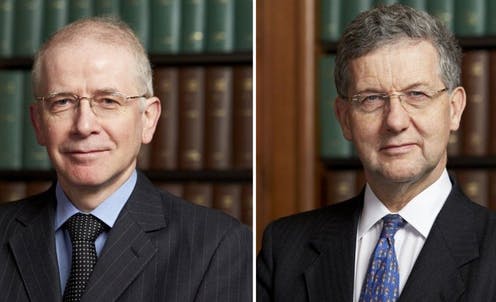 Lord Robert Reed and Lord Patrick Hodge, the UK supreme court president and deputy president, have resigned from their roles on Hong Kong’s top court. On their departure, they criticised the state of civil liberties and the rule of law in Hong Kong following the implementation of the national security law by Chinese authorities in 2020.

Reed and Hodge are not the first foreign judges to leave the court following the national security law, which the local administration has used to target the political opposition and shut down independent media publications.

James Spigelman, a former Chief Justice in Australia, resigned in September 2020. And Brenda Hale, a retired president of the UK supreme court, decided not to renew her term of office in June 2021.

Spigelman and Hale did not explicitly cite the national security law in their departures, though both had expressed their concerns on other public occasions. After their departure, the UK supreme court reasserted its confidence in the city’s rule of law and independent judiciary.

The latest resignations are particularly significant in that they represent the UK dropping its institutional support for Hong Kong’s legal authority.

During the colonial era, the UK privy council had the power of final adjudication over Hong Kong. In 1984, when Britain and China signed the Joint Declaration on Hong Kong’s sovereignty transfer, they established the court of final appeal as Hong Kong’s top court, and agreed it may invite judges from other common law jurisdictions to sit on the court. In 1997, the two jurisdictions agreed that Britain would provide the court with two serving law lords. Later, judges from other common law jurisdictions, including Australia, Canada and New Zealand, also joined.

As Lord David Neuberger, one of the British judges on the court, put it in 2017:

Foreign [judges] are the canaries in the mine: so long as they are happy to serve on the HKCFA, then I think you can safely assume that all is well with judicial independence and impartiality in Hong Kong, but if they start to leave in [droves], that would represent a serious alarm call.

The alarm rang in July 2020, when the Chinese authorities imposed Hong Kong’s national security law. The law established a “committee for safeguarding national security”, which is supervised by an envoy from Beijing and is not subject to judicial review.

A condemnation of Hong Kong authorities

The resignation of the two British judges marks a dramatic shift in the UK’s position. Their statement says that remaining on the court would be seen as an endorsement of Hong Kong’s departure “from values of political freedom, and freedom of expression”.

Although the court handled many non-national security law cases fairly, foreign judges have been involved in Hong Kong’s weaponisation of its courts to crack down on free speech and political participation. One constitutional review, endorsed by Lord Reed, led to the imprisonment of a former pro-democracy lawmaker for contempt after he chanted protest slogans in the legislative chamber.

The resignations of lords Reed and Hodge signal to the global community that foreign judges in Hong Kong cannot do much to observe and safeguard human rights in the existing system. Under Hong Kong law, foreign judges are barred from attending hearings of the high court appeal committee, which decides whether leave is granted for appeal. In short, foreign judges can only hear cases filtered by the local judges, who can also give rulings disrespecting basic legal rights.

After the resignation, the Chinese and Hong Kong authorities, the Hong Kong Bar Association and the Law Society of Hong Kong, expressed regrets and suspected possible “political interference” by UK parliament. However, they have missed the point. Lords Reed and Hodge declared that their decision is not about local courts’ commitment to the rule of law, but about the administration’s attitude to political and speech freedoms.

The remaining foreign judges, which includes three from Australia and five from the UK, have (for now) decided to remain on the court, but it should be noted that they are retired from their other judicial roles. The UK supreme court’s decision is institutional, and backed by the UK foreign secretary. It marks the end of its confidence in Hong Kong’s authorities. Regrettably, the continuing presence of the remaining foreign judges is not comparable with the loss of endorsement from the UK.

Hong Kong’s rule of law has changed significantly since its handover to China, and the city’s top court has little room to provide a remedy. The more the Chinese and Hong Kong authorities weaponise laws and courts to achieve their political ends, the less it is possible for them to maintain public and global confidence in the city’s rule of law and independent court.

Eric Yan-ho Lai does not work for, consult, own shares in or receive funding from any company or organisation that would benefit from this article, and has disclosed no relevant affiliations beyond their academic appointment.