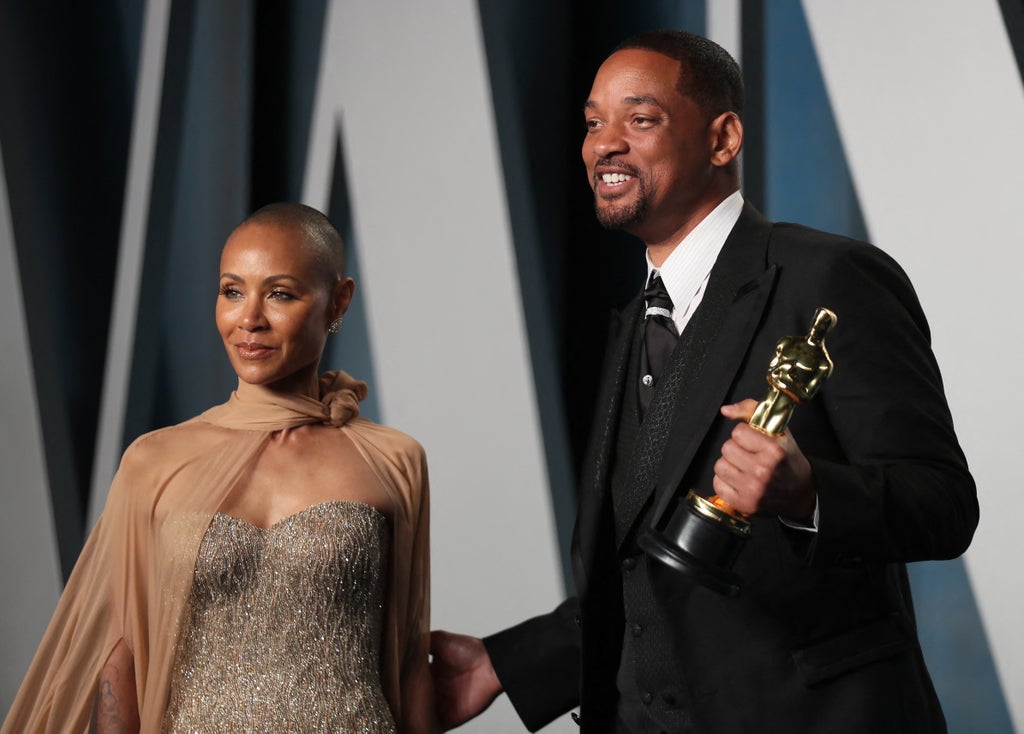 scars bosses have launched a formal review into the altercation which saw between Will Smith slap comedian Chris Rock on stage during Sunday night’s ceremony.

The Academy of Motion Picture Arts and Sciences said it “condemned” the actions of Smith, who later went on to win the Oscar for best actor following the incident at the 94th annual movie awards.

Smith stormed onstage and hit the comedian in front of a star-studded audience at the Dolby Theatre in Los Angeles, after Rock made a joke about his wife Jada Pinkett Smith and her hair loss.

Pinkett Smith has previously spoken about her struggles with alopecia and said it is what prompted her to shave her head.

In a statement to media on Monday, the film academy said: “The Academy condemns the actions of Mr Smith at last night’s show.

“We have officially started a formal review around the incident and will explore further action and consequences in accordance with our bylaws, standards of conduct and California law.”

It was earlier reported that Academy Awards members held emergency talks to discuss whether Smith should be stripped of his Best Actor gong.

Sources said some called for the star to be kicked out of the organisation during a crisis meeting held over Zoom.

Smith went on to receive the Best Actor award for his role in biopic King Richard, when he apologised to the Academy and fellow nominees in a tearful acceptance speech.

A source told The Sun the Academy went into “full crisis mode” after the astonishing incident.

“Once the ceremony was over the called in key members to hold an emergency meeting about what action they should take,” the source said.

“There have been calls to have Will stripped of his Best Actor gong.

“They cannot be seen to be condoning violence in any way and there are some people in the Academy who believe they should remove the award from him to make a point.

“Others however believe he should be allowed to hold onto it.

“Chris was immediately supported backstage and has been offered a package of after care where he can talk to professionals provided by the academy if needed.

“The Academy are taking this incredibly seriously.”

The incident prompted enormous backlash on social media and across Hollywood, with the Academy saying it “does not condone violence in any form”.

US chat show host Whoopi Goldberg says Will Smith “made a mistake” but the Academy would not take his best actor prize away for slapping Chris Rock.

The former Oscars host said the King Richard star had been under a lot of pressure on the night and had “snapped” and “overreacted”.

Speaking on her talk show The View, Goldberg said: “We’re not going to take that Oscar from him.

“There will be consequences, I’m sure, but I don’t think that that’s what they’ll do, particularly because Chris said, ‘Listen, I’m not pressing any charges’.

“(Smith) made a mistake… overreactions, mistakes were made. I think he overreacted.

“He had one of those moments where he was like… just stop. And you’ve got all the pressure of hoping that you win and trying to keep your face.

“I get it, not everyone acts the way we would like them to under pressure, some people just snap. He snapped.

“I don’t know if they spoke or if he apologised or not, all I know is that sometimes you get to a point and you behave badly.”

Other celebrities defended Smith, with comedian Tiffany Haddish saying the incident was “the most beautiful thing I’ve ever seen”.

“When I saw a black man stand up for his wife. That meant so much to me,” she told People magazine at the Governors Ball after the ceremony.

“Maybe the world might not like how it went down, but for me, it was the most beautiful thing I’ve ever seen because it made me believe that there are still men out there that love and care about their women, their wives.”

Smith’s son Jaden Smith, 23, also appeared to defend his father’s actions, tweeting “And That’s How We Do It”.

Tennis star Serena Williams, whose father was played by Smith in King Richard, shared a video on her Instagram story showing her looking shocked, later admitting she “had to put her drink down”.

Rapper 50 Cent shared a photo of the moment on Instagram and wrote: “B!tch don’t you ever play with me. LOL.”

After being named best actor for his performance in King Richard, Smith used his acceptance speech to apologise to the Academy and “all my fellow nominees” – but not Rock.

Other famous faces criticised the incident, including Star Wars actor Mark Hamill, who dubbed it the “ugliest Oscar moment ever”.

He added: “Stand-up comics are very adept at handling hecklers. Violent physical assault… not so much.”

Actress Mia Farrow tweeted: “It was just a joke. Jokes are what Chris Rock does.

“Always has been edgy. This was a mild joke for him. And I love GI Jane.”

The Last Samurai producer Marshall Herskovitz urged the Academy to do more than simply issue a statement in response to the incident.

He said on Twitter: “I call upon the Academy, of which I am a member, to take disciplinary action against Will Smith.

“He disgraced our entire community tonight.”

She said on Twitter: “Let me tell you something, it’s a very bad practice to walk up on stage and physically assault a Comedian.

“Now we all have to worry about who wants to be the next Will Smith in comedy clubs and theaters.”

Strictly Come Dancing judge Motsi Mabuse, who was born in South Africa, described it as “internally one of the biggest and disappointing shameful moment ever” and criticised Smith and Rock.