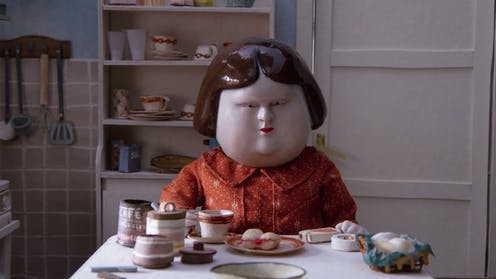 This article contains references to sexual assault and rape that some may find distressing.

Chilean stop-motion animation film Bestia, up for an Oscar in the shorts category, has exposed wounds in a country still grappling with the demons of its past. Bestia, directed by Hugo Corruvias, tells the chilling story of Ingrid Olderock a Chile-born German known as “The Dog Lady”. Olderok was an agent of the National Directorate of National Intelligence (DINA), which was created by Augusto Pinochet after overthrowing Salvador Allende in 1973.

Accounts by her victims alleged that she had trained her German Shephard Volodia to rape female left-wing dissidents during the Pinochet regime. The film is inspired by Journalist Nancy Guzman’s book La Mujer de los Perros (The Dog Lady). Guzman interviewed the now-deceased torturer in 1996.

The film exposes the depths of torture and corruption in Chile through the troubled mind and everyday thoughts of Olderok. After Pinochet fell, those who had committed the worst atrocities were let off scot-free and allowed to reintegrate into society.

The same happened again in 2019 after Chileans rose against continuing inequality and injustice. While the dictatorship-era constitution was abolished, politicians used it once again not to pay for their crimes. Bestia exposes how the powerful in Chile then and now can avoid punishment for such human rights abuses.

Ingrid Felicitas Olderock Bernhardt was raised in the German Colony of Peñaflor in central Chile where her grandparents settled shortly after the second world war. She went to a German school and she and her siblings were forbidden to speak Spanish or mix with Chileans. She told Guzman:

I was a Nazi from childhood. Germany had never been stronger than under the Nazis.

In her 20s, Olderock became a policewoman, quickly ascending the chain of command thanks to her diligence and work ethic. She was Chile’s first female parachutist to jump 1,000 feet and a skilled markswoman.

Shortly after the 1973 coup, she presented a project to her boss: to train an anti-Marxist female commando. A year later, she was in charge of 60 trainees at the School of Santo Domingo, equipping them to shoot, follow, detain and torture left-wing female dissidents.

In 1975, Olderock was asked by the head of the secret police (DINA) to participate in the interrogation of prisoners. Volodia the German Shephard dog became Olderock’s most terrifying instrument of torture.

In the dank basement of an ordinary house in Santiago nicknamed “La Venda Sexy” (sexy blindfold), she is alleged to have directed the hound to sexually abuse and maul detainees, most of whom were killed and then disposed of. It wasn’t until 1981 when an attempt was made on her life by two members of the underground resistance, that Olderock’s name and heinous deeds became known to the public.

How was such a sinister character allowed to live in anonymity until she died in 2001? Put simply, Pinochet’s military pact of silence and a culture of impunity that still thrives in Chile today.

Neither the military nor police force has been reformed since the start of Chile’s weak democracy. This period of transition began when Pinochet lost the 1988 referendum after which he was forced to concede power to a civilian government.

This transition toward democracy came with conditions attached. Pinochet demanded the silence of the survivors of torture, and immunity from prosecution for those that committed human rights abuses during the regime. This forced victims to live alongside their former abusers, like Olderock. To date, the whereabouts of around 4,000 people disappeared by the regime is still unknown.

With an unreformed military whose silence and crimes are protected by the current constitution, a new generation of torture victims are having to live in silence.

A Democracy Bathed in Blood

Modern political developments in Chile have all been rooted in political agreements that guarantee immunity for the military, exclude important social actors and ensure the model implemented by the regime remains untouched. In 1985, the national agreement seeking a path toward democracy was signed by the Catholic Church, the regime and a small number of opposition groups. Groups affected by the repression, left-wing politicians and nongovernmental organisations were excluded.

In 1991, the “Rettig Report” into human rights violations was published on the condition that retaliation violence from left-wing groups was included. Large sections of print were blacked out, protecting the identity of military personnel involved in human rights aberrations.

In 2004 torture victims were invited to give their testimonies to the “National Commission of Political Prison and Torture”. They were paid a paltry sum and the file closed for 50 years.

After the social uprisings over the cost of living in late 2019 dubbed “El Estallido” (social outbreak), Chile’s attorney general’s Office launched 8,581 total cases of alleged police abuses. This was in response to widespread military repression against protesters that resulted in over 500 ocular traumas, 35 deaths and tens of thousands of accusations of torture.

The 2019 “Acuerdo por la Paz” (peace agreement) was a timely solution for the president Sebastián Piñera and his cronies. In exchange for a new constitution, he would get himself off the hook and create a mechanism to quell the uprising. As a result, many of the cases have been closed without prosecution.

Once again, the agreement was made by an elite group, mistrusted by the general public and excluding important social actors. It also side-stepped the many human rights violations, adding yet another layer of impunity in Chile’s imperfect democracy.

During the dictatorship Chileans resisted impunity through song, murals and textile art. In the digital age, a new generation of filmmakers and content producers continue the struggle against repression, cronyism and lingering injustices. In this context, Bestia serves as both testament and homage to Chile’s forgotten victims.

Carole Concha Bell does not work for, consult, own shares in or receive funding from any company or organisation that would benefit from this article, and has disclosed no relevant affiliations beyond their academic appointment.

2022-03-23
Previous Post: ‘May kill or be killed’ – Former tennis star admits he is fighting for his life defending Ukraine from Russian invasion
Next Post: Spring statement 2022: quick analysis about standard of living, energy crisis and more – from experts