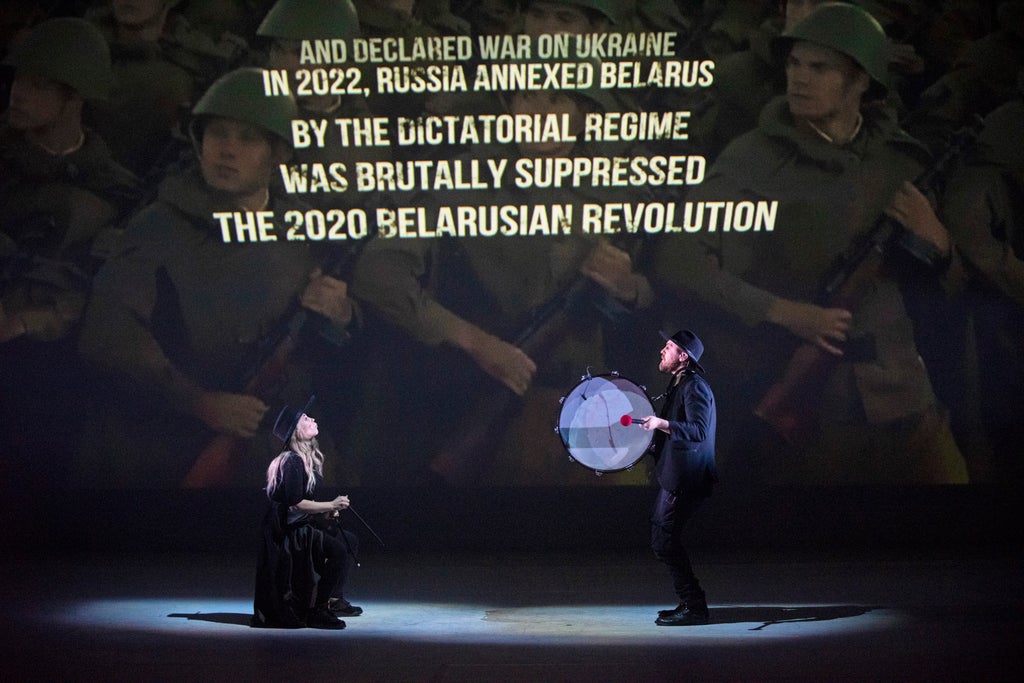 his drifty, nightmarish vision of a future Russian superstate from Belarus Free Theatre has become more timely than the company could ever have feared. Adapted from a 900-page dystopian fantasy by Alhierd Bacharevic, it was first staged in Minsk in 2019, since when the book has been banned and the ensemble – which previously faced harassment, arrest, even torture – has been exiled by Alexander Lukashenko’s despotic regime. In the last two weeks, the cast and crew have lost family and friends to Vladimir Putin’s vicious attempt to reinstate a greater Russia, with Lukashenko’s help.

The show, devised by the company’s co-founders Nicolai Khalezin and Natalia Kaliada, is a mordant, visually stunning mood piece, more concerned with atmosphere than plot. The premise is that, after a conflict in 2019, Russia has expanded to consolidate Central Asia, Afghanistan, the Baltic states and many other countries into a sprawling, authoritarian new Reich. The collapsed EU has regrouped behind a vast border wall as the League of European States.

The hazy subsequent narrative flits between 2019 and 2049, and – in the first half – from the Belarusian village of White Dews, where teenager Mauchun gets caught between the authorities and a mystery female parachutist who speaks an invented language, to a contaminated island bought by a rabid nationalist. The second half is a travelogue with murder-mystery trappings, where leather-coated Teresius Skima from the Department of Unknown Entities seeks the identity of a dead poet in Berlin, Hamburg, Paris, Prague, Vilnius, and behind the new iron curtain in Minsk.

Compact, charismatic Aliaksei Naranovich is symbolically stripped of Mauchun’s identity in a firefight that ends the first half, and spends the interval running naked round the stage before assuming Skima’s guise in the second. It’s probably better to surrender to the powerfully evocative imagery, the gutsy performances and the affecting music by Mark and Marichka Marczyk, aka Balaklava Blues, than to try too hard to link the many plot strands – BFT shows are flexible and fluid, and this one has gained 20 extra minutes in the fortnight since Ukraine was invaded, including a reference to the defenders of Snake Island who told a Russian warship to go f*** itself.

Sleek drone footage and scratchy, collage-style animation unfold on a giant screen: in front, books are burned or rendered as a Sisyphean burden for a naked man. Stuffed geese rain from the skies, as do red streamers representing missile fire. There’s a one-armed accordionist, a hunted bride in a white dress and scarlet veil – the colours of the Belarusian resistance – and a hotel maid in latex and suspenders. Much of what happens is comic, but the background music is of oppression, the restriction of thought, and an ambivalent attitude to national identity.

At the first night on Thursday, the cast and co-director Kaliada assembled at the curtain call to express solidarity with Ukraine in front of the words: “Where the books were burned in time people will burn.” This is an urgent, organic response to a crisis that the unthinkably brave Belarus Free Theatre have been warning us about for years.

2022-03-12
Previous Post: The cost of war: how Russia’s economy will struggle to pay the price of invading Ukraine
Next Post: Ukraine is well ahead in the global battle for hearts and minds – but Russia knew this would happen