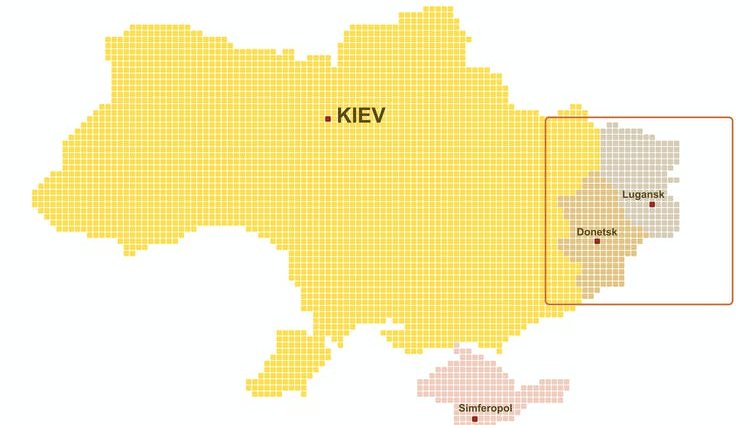 Vladimir Putin’s recognition of the independence of the two breakaway republics of Donetsk and Luhansk followed a surreal live broadcast of a security council meeting in the Kremlin. Sitting facing the 13-member council, Putin cajoled and argued as, one by one, his most senior officials – including Dmitry Medvedev, a former president and prime minister, and the country’s foreign minister, Sergei Lavrov – took to the lectern to provide their boss with “reasons” for the formal recognition of the two republics in the country’s east as independent states.

He followed this decision by authorising Russian troops to cross into the republics in a “peacekeeping” capacity. It was also reported that the recognition treaties give Russia the right to establish military camps there.

Blaming the decision entirely on Ukraine and those governments in the west – above all the United States – which “control” Ukraine, Putin questioned more than once the very legitimacy of the existence Ukraine as a nation-state. He put forward an argument that was very similar in language to an essay he published on the Kremlin’s website in July 2021, On the Historical Unity of Russians and Ukrainians.

Putin portrayed recognition as a decisive step by a true “great power” asserting its interests and protecting vulnerable “kin” communities. But the gambit raises more questions than it answers. The most obvious among them is whether this is the end of the current crisis, or at least the beginning of the end of it.

An optimistic reading would be that the recognition offers a way out for everyone. Putin saves face by humiliating Ukraine and the west but avoids full-scale war and the human and economic costs that would impose on Russia.

If you take this at face value – that Putin is only interested in protecting the rights of the two pro-Russian republics – then accepting recognition would spare Ukraine a major military confrontation with Russia. It would also mean that Kyiv would avoid the domestic political difficulties and socio-economic costs that an implementation of the deeply unpopular 2015 Minsk agreement would mean for the Ukrainian president Volodymyr Zelenskyi and his government.

As in Georgia after the invasion of 2008 – and with Crimea after its annexation by Russia in 2014 – recognition could lead to a gradual stabilisation in the regions. Neither side has to argue about the implementation of the Minsk agreement anymore. The deadlock that had been reached in this process would no longer constitute a source of tension and mutual recrimination.

But this is a very optimistic assumption. It would be a mistaken reading of perhaps the most dangerous moment of European and global security since the end of the cold war.

No matter how desperately one might long for a silver lining in the current situation, the fact remains that Russia’s recognition of the two breakaway republics is yet another major violation of international law. Western sanctions are now being introduced and may include full and most punitive measures. Previous disagreements between the EU, US and UK on the scale of sanctions seem to have been overcome.

Russian actions have, if anything, strengthened western resolve, as is clear from the immediate responses from countries like the UK and Germany, which has announced it won’t certify Russia’s Nord Stream 2 gas pipeline.

The current crisis is about more than the status of “certain areas of Donetsk and Luhansk regions”, as the territories are referred to in the Minsk agreement. It does not resolve the broader tensions between Russia and the west over the future European security order.

It is obvious that Putin has become convinced that the continuing status of Donetsk and Luhansk as de facto states within Ukraine – and thus as an instrument of leverage over Ukraine and, by extension, over its western partners – had ceased to serve Russia’s purposes. But his hour-long televised speech has given little cause for optimism that their recognition has put an end to the “Ukrainian issue”.

Significantly, Putin’s speech focused much more on the wider problems of Russian-Ukrainian relations than the problem of the two Donbas republics. The Russian president reiterated a much broader agenda that links the situation in Ukraine clearly to his overall challenge to the international order. Various snippets are worth looking at more closely in this regard.

According to Putin, Ukraine – as a result of Soviet boundary drawing in the 1920s, 1940s and 1950s – became an “artificial” territorial construct. After the collapse of the USSR, it ended up with “historically Russian territories” inhabited by ethnic Russians whose rights are violated in contemporary Ukraine.

Putin also asserted that these violations have in large part been due to Ukraine being a failed state in which decisions are being made by corrupt authorities that are under the control of “western capitals”. But, perhaps most importantly, he repeated that Ukraine, by moving closer to Nato, has already created threats to Russia – to which Russia must respond.

Taken together with the signing and immediate ratification of “friendship treaties” between Russia and the now recognised breakaway republics and the decision to move Russian troops into the newly recognised republics, Putin’s recognition speech and its tone make it much more likely, therefore, that this is at best a brief interlude in a continuing and deepening crisis.

More realistically, the recognition and the actions taken in its immediate aftermath signal a dramatic escalation on the part of Russia. Putin’s track record since 2008 should not leave anyone in doubt about the fact that this crisis is far from over.

Stefan Wolff receives funding from the United States Institute of Peace. He is a past recipient of grants from the Economic and Social Research Council of the UK, the British Academy, the NATO Science for Peace Programme, the EU Framework Programmes 6 and 7 and Horizon 2020, as well as the EU's Jean Monnet Programme. He is a Senior Research Fellow of the Foreign Policy Centre in London and Co-Coordinator of the OSCE Network of Think Tanks and Academic Institutions.

2022-02-23
Previous Post: How potato milk measures up against other plant-based milk alternatives
Next Post: Have hybrid coronaviruses already been made? We simply don’t know for sure, and that’s a problem