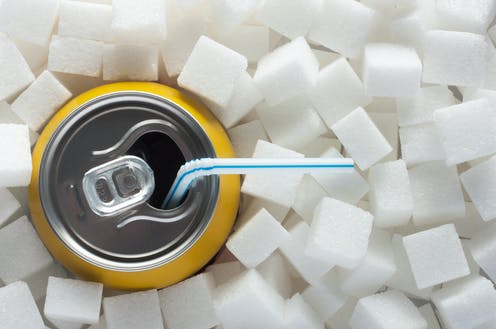 Obesity is one of the most serious health problems facing the UK, where around 65% of adults are either obese or overweight. This has implications. In 2006/2007, obesity cost the NHS £5.1 billion. That means we are likely to pay more taxes in the future to keep the NHS functioning unless something is done. Obesity also predisposes people to a risk of several serious health issues, including cardiovascular disease, diabetes, certain cancers, depression and anxiety.

The consumption of high sugar products such as soft drinks are a major cause of obesity and diabetes. In April 2018, the UK government introduced a soft drinks levy on sugar-sweetened beverages in an effort to reduce the amount of sugar people consumed and control the situation.

In an attempt to assess the effectiveness of the policy, researchers from the University of Cambridge concluded that two years after the implementation of the policy, though the sugar content of soft drinks was reduced by 30g per household per week, the volume of soft drinks purchased has remained the same.

This troubled us so we conducted the first study comparing the effectiveness of the soft drinks levy to proposed mandatory restrictions on soft-drinks promotions.

Sales promotions are marketing strategies used by retailers to lure consumers to buy their products. These include temporary price reductions, Buy One Get One Free (BOGOF), buy Y for £X, coupons, and so on. Unfortunately, more unhealthy foods – those high in fat, salt and sugar – are promoted than healthy ones. While the overall aim is to boost sales, consumers take advantage of promotions for the thrill – the excitement of getting a bargain. This leads to impulse buying, stockpiling and over-consumption.

In June 2018, the UK government announced its intention to ban promotions of products high in fat, sugar and salt (HFSS) by location and price through legislation. It then began a consultation on the plans between January 12 and April 6, 2019.

The consultation received 807 responses from individuals, businesses and organisations. Around 60% of respondents were in favour of the government’s proposal to restrict HFSS promotions. Although the study was carried out to encourage the government to implement the policy as quickly as possible, it will only come into force in April 2022.

In our study, we looked at the spending of 2,568 households in Scotland and compared the impact of both policies on different groups of consumers according to income levels, location, life stage and Scottish index of multiple deprivation.
Those in more deprived areas were more likely to continue to buy high sugar drinks despite the tax.

We also predicted how consumers would react to a restriction on the promotion of sweetened drinks based on their spending patterns. Our results suggest that when the government goes ahead with this policy in April, the annual quantity of drinks purchases could reduce by 35.8% compared to 1.4% by the soft drinks levy. That’s around 25 times effective more than the soft drinks tax.

Studies assessing its impact conclude that the sugar tax policy is very effective. But promotions are a major driver of retail purchases and tend to be heavily directed towards less healthy options. The results from our study suggest that banning promotions on soft drinks will have more success in cutting down the consumption of sugary drinks.

This would be good news for the government, the NHS and the health of consumers. The reduction in sugar intake could help to tackle diabetes, the most expensive burden on the NHS, reduce obesity and increase life expectancy across the UK. And in turn the government could save on the amount it contributes towards the treatment of obesity and weight-related diseases.

2022-02-21
Previous Post: Early trauma affects an elephant’s ability to assess threat from lions – new research
Next Post: TikTok Wants Longer Videos—Whether You Like It or Not