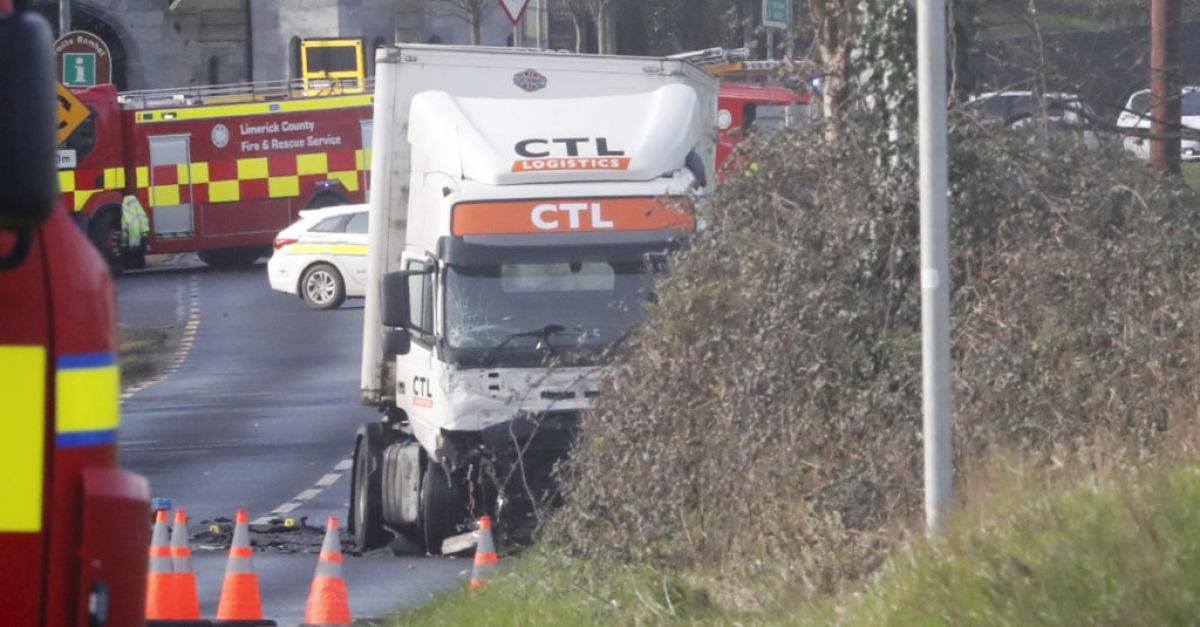 Gardaí have appealed for witnesses and dash-cam footage after a 12-year-old boy died when the car he was driving collided head-on with an articulated lorry on Friday.

The boy, named locally as Wictor Chojecki, from Newcastle West, Co Limerick, was driving a grey coloured Nissan Qashqai owned by his family, just before 2am, when it collided with a heavy goods truck.

The horrific crash, which left the boy dead at the scene and the car destroyed, occurred on the N21 at Rineroe near Adare, gardaí said.

The boy whose mother, Ewa, and father, Bartosc, settled in Newcastle West after emigrating from their native Poland, was a first year student attending Scoil Mhuire agus Ide, in the town, and a past pupil at the local Gaelscoil O’Doghair.

“Wiktor is sadly missed, his lots of friends in the school are upset this morning after hearing the tragic news, and the family are in Newcastle West for many many years and are very much part of the community,” said Mr Lane.

“It’s such a tragic loss, and we are supporting our students in the school community today. Our critical incident management plan was implemented where we had our year heads, class tutors, and our counsellors in school, working with the students; We also had the NEPS (National Educational Psychological Service) psychologists in the school today to support all students across the whole school who may be affected by the tragedy.”

“We were all very shocked and upset to learn of the tragedy this morning, and it’s very hard for our students to put into words how they are feeling, but there is great sadness and shock amongst all the school community,” he said.

Paying tribute to the boy, Mr Lane said: “He was very well liked, and he mixed well with students and with staff members, and there are a number of staff members who are particularly upset because he would have had chats with them every day. A lot of our students who would have been at primary school with him are also very upset, especially across our first year group.

“He was in the Gaelscoil primary school here in town, so he would have been well known and part of a big class group there and part of a big group here, so his loss will be felt right across the school community.”

Ewa and Bartosc Chojecki were being comforted by family and friends and a large Polish community in Newcastle West.

Gardaí and emergency services were alerted to the fatal crash just before 2am and discovered the boy deceased and trapped in the car which had been destroyed in the collision.

The boy was pronounced dead at the scene. The truck driver was not injured and was being treated for severe shock.

Local Fine Gael Councillor Adam Tesky said the tight-knit rural community had been plunged into sadness shock: “First of all as a councillor representing people in the area, I would like to express my sincere sympathy and condolences to the family, and I want to express my sincere gratitude to the emergency first responders and members of An Garda Síochána and Limerick Fire Service that went to help at the scene.

“But also, our thoughts are with the driver of the lorry for what he witnessed and must have seen last night, it must have been harrowing for him.”

“The other thing I just wanted to say was there are a lot of people in th boy’s age group that have lost a friend and there is a pupil missing from his school desk today, so obviously he has friends that will be mourning his loss and in grief.”

Cllr Tesky added: “I would say to people, just to be careful in terms of (posting) commentaries on social media platforms because nobody knows the circumstances and what were involved and having a guy of such a young age to be driving a propelled vehicle last night.”

Parish priest of Adare, Monsignor Dan Neenan, said prayers at the scene of the fatal accident and spoke of the shock experienced in the community.

Fr Neenan said he had been called to the scene at 4am by gardaí and when he arrived the body of the boy was being taken from the car. “It was obvious he was dead so I said prayers,” he told RTÉ radio’s News at One.

“Our thoughts are with the family of the bereaved, but also of the truck driver who was involved in the accident also, who I know is quite shaken by the event,” he said.

Gardaí were keeping an open mind as to the circumstances that led to the boy being behind the wheel of the car in the early hours of the morning, and a garda source said investigating officers were treating it as a tragic accident.

Gardaí were working on the theory that the boy took the car for a spin without his family’s knowledge. The boy’s family were described by several sources as “decent” and “hard-working” people.

“The driver of the car, a male juvenile, was fatally injured, he was the sole occupant of the car, his body has since been removed to the morgue at University Hospital Limerick, and the coroner has been notified,” said a garda spokesman.

“The driver of the lorry, a man in his 40s, did not require hospital treatment. The scene is preserved for examination by Garda Forensic Collision Investigators.”

Traffic diversions were in put place near the scene on the N21, with Limerick City bound traffic diverted from the village of Adare via Croom.

“Gardaí are appealing for any witnesses to this collision to come forward. Any road users who may have camera footage (including dash-cam) and were travelling on the N21 near Adare area at the time of the collision are asked to make this footage available to Gardaí,” said the garda spokesman.

Anyone with information is asked to contact Newcastlewest Garda Station 069 20650, the Garda Confidential Line on 1800 666 111, or any Garda Station.

2022-02-11
Previous Post: If Russia invades Ukraine, what could happen to natural gas supplies to Europe? Podcast
Next Post: ‘Sir Henry’ is expected to ‘putt’ things right!