Ukraine: Russia probably won’t turn off the gas, but the problem won’t go away any time soon 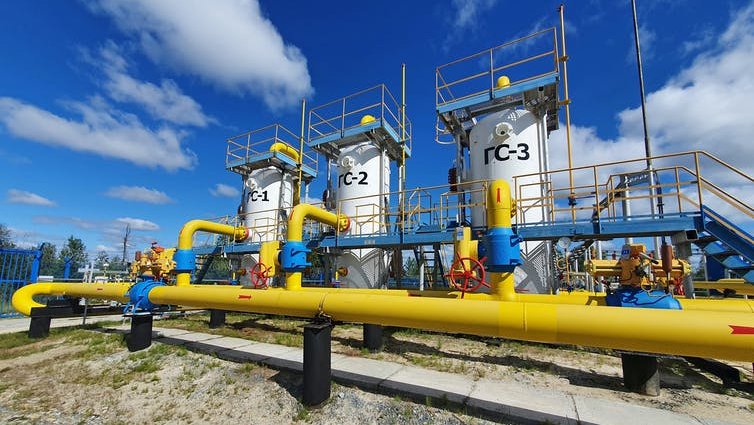 One of the key issues raised by the crisis on the Ukraine borders is the future of Europe’s gas supply. As talks have foundered over the past month, Russia’s state-controlled Gazprom warned of the low levels of gas in European storage facilities.

The US and Europe, meanwhile, have threatened that unless Russia backs down and moves its troops away from the Ukraine border, sanctions could include scrapping Nord Stream II. This is a 750-mile pipeline connecting Russia and Germany with the potential to supply 26 million homes, alongside supporting the wider north-west European gas market. The pipeline has been completed but has not yet been certified by Germany’s energy regulator.

The data on the level of dependence on Russian gas is confusing due to the impact of the pandemic in 2020 that depressed demand. But, according to colleagues at the Oxford Institute for Energy Studies (OIES), in 2021 Russia supplied about 35% of the gas imported to Europe (defined as the UK and the 27 states the comprise the EU), about 31% as pipeline gas and 4% as liquefied natural gas (LNG). In the back of everyone’s minds is what happens if Russia turns off the gas taps in winter.

I’ve been thinking and reading a lot about this and talking to gas experts and I think that – despite the obvious concern – the consensus seems to be that it is highly unlikely that either side will want to disrupt the flow of natural gas into Europe.

Russia’s – and before it the Soviet Union’s – supply of natural gas to Europe has created an enduring interdependence that has survived many geopolitical upsets, such as the Soviet Invasion of Afghanistan in 1979, the declaration of martial law in Poland in 1980s, the fall of the Berlin wall in 1989, the collapse of the Soviet Union in 1991 and most recently Russia’s annexation of Crimea in 2014. Time and again both sides have recognised that they have too much to lose from disrupting the flow of gas.

At the moment, Russia is fulfilling its long-term contractual obligations to supply gas. It’s not doing any more than that – which raises the question of whether there has been a deliberate strategy of ensuring that storage remains low and the price remains high, which is good business for Gazprom. But breaking those contracts would result in financial legal and reputational damage for Russia.

It’s important to remember that Russia also needs the money. About 75% of Gazprom’s income comes from these exports – and it needs that income to be able to supply gas at a lower price to its domestic consumers. According to the OIES, gas exports account for about 6% of the Russian government tax revenue – far less than oil, but not not an inconsequential amount of income for the Russian government. It’s highly unlikely they would want to do it.

As far as Europe is concerned, it is unlikely sanctions would target the flow of natural gas. This could exacerbate an already difficult situation which has sent prices spiralling because of the jittery markets. Disruption to the current levels of Russian gas supply could result in power cuts in parts of Europe highly dependent on Russian gas supplies. So, this would be an own goal for Europe. Sanctions can often be a double-edged sword that harm the countries that impose them as much as the intended target of the sanctions.

What happens if the gas is turned off?

As in any energy infrastructure, you need to maintain a certain amount of gas to keep the system working. That’s true of storage facilities, pipelines, and the like. Some industrial consumers can switch to other sources, such as fuel oil, but many may have to reduce their operations, particularly where natural gas is an input into industrial processes.

Compared to previous supply disruptions between Russia and Ukraine, the biggest difference this time is the context within which it’s happening: a very tight global gas market. In short, it is difficult to see where additional supplies to Europe would come from if needed.

If you think back before Christmas, when we were discussing the global gas crisis, it was a situation not of Russia’s making entirely – but certainly Russia was taking advantage of it. It wasn’t delivering additional supplies on the short-term spot market and it hadn’t filled up the storage facilities that it owns in Europe.

Whatever happens in the next couple of months, things will remain difficult. Because of its role in domestic heating, gas demand is strongly influenced by the weather. A prolonged cold snap in the coming weeks will draw down on storage even further. At the same time, gas backs up wind and solar in the power system and prolonged periods of low wind and sunshine promote greater gas use. Things will ease by spring – but by then storage will be very low and it will be difficult and costly to fill it for next winter.

If calmer heads prevail and a solution is found to the current tensions over Ukraine and the Nordstream 2 pipeline is approved over the summer, then pipeline gas supplies from Russia may increase into next winter. If not – and there are continued low levels of supply from Russia – then next winter could be just as difficult, if not more so.

In the longer term, the problem for Europe is that domestic gas production will continue to decline. So, unless demand is reduced, the level of gas imports will continue to rise. The lesson learnt from the latest crisis should be that Europe needs to accelerate decarbonisation of its energy system and reduce the amount of natural gas consumed. But that is easier said than done.

This article is based on an interview Michael Bradshaw gave to The Conversation Weekly podcast: If Russia invades Ukraine, what could happen to natural gas supplies to Europe?

2022-02-10
Previous Post: Five midfielders Man Utd could sign to replace ‘dummies’ and appease Ronaldo
Next Post: Why age verification is another flawed attempt to regulate online pornography in the UK