Dizzying highs and crushing lows: is being a sports fan good or bad for you? 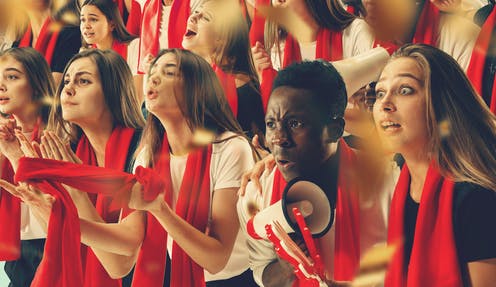 Performance slumps. Relegations. Points deductions. Failed takeovers. Being a sports fan can seem an easy route to heartache when even the good times come with the spectre of future decline.

However, the passion fans have for sport stays strong – and they continue to make financial, social and emotional investments in the teams they support.

Fans of American football have been reported to spend 46 hours a month talking and thinking about their team, and travel an average of 296 miles (476km) to attend an away game.

An average family of four supporting the Las Vegas Raiders would spend around US$780 (£575) to watch a game.

In 2018, British football fans spent an average of £712 a year supporting their team – and more if their team was in the Premier League.

The despondency that many fans feel at a loss might lead them to question whether all this time and money spent following a team is worth it. Research shows, though, that while watching a match can cause stress, being a fan can be good for you – even in defeat.

More than a game

Sporting competitions can evoke strong emotional responses in athletes. The release of a hormone called cortisol causes a stress response, which includes a higher heart and breathing rate and helps prepare us for challenges and demands that we may face. It can be observed across various phases of competition.

In male athletes experiencing a victory, playing at a home venue and even watching a teammate win have been linked to an increase in testosterone. Research with male tennis players found that those with higher testosterone before a match also felt more positive about the match.

Research suggests that fans can also have similar physiological responses to those of the players they support. For example, during the 2010 Fifa World Cup, male and female Spanish football fans had higher testosterone and cortisol levels when watching a match, although this was not linked to their teams’ victory.

Similarly, research from the 2014 Fifa World Cup found male and female Brazilian fans who were more “highly fused” with their team experienced heightened levels of cortisol. This meant they had higher levels of stress, especially in situations of unhappiness and frustration.

Cortisol is released when we experience a stressor that can, in turn, affect our immune system. Therefore, highly committed fans who get overly angry or excited need to be aware that too much cortisol over a prolonged period can be detrimental to their health. Indeed, during the same 2014 Fifa World Cup, researchers in Germany reported that during the tournament there was a greater number of hospitalisations for heart attacks across men and women.

Part of the crowd

Fans play an instrumental role for their team. They contribute to the home advantage, with managers and players acknowledging the impact of the home crowd.

Being part of the crowd can have benefits for fans, too. Feeling connected socially can have a positive effect on our self-esteem and wellbeing.

Being a sports fan helps to meet our need to belong. Fans can enjoy the glory of a victory alongside their fellow supporters, friends and family.

US college football fans who experienced a win subsequently had a boost in self-esteem that lasted up to two days post-game. For fans who shared the burden of defeat, being part of a group may have acted as a protective mechanism for their self-esteem.

Research has found that fans who experienced less success with their clubs are more loyal to each other. Football fans of less successful clubs would be more willing to sacrifice their lives for their fellow fans. The strong social connections forged at these clubs may be a real benefit for their fans.

Read more:
When football clubs are less successful, fans are more loyal to each other


The importance many of us place on sport became very clear when COVID restrictions led to the suspension of sporting events. In Britain, football shut down and fans were unable to attend matches.

Support for the supporters

In the UK, football has proven to be a valuable medium for targeting fans for mental health interventions. Statistics show that men are at particular risk of suicide and are less likely to disclose a mental health issue.

Many football club foundations have seized the opportunity to raise awareness and provide advice for their supporters, such as Newcastle United Foundation’s “be a game changer” initiative.

Being a sports fan can have many benefits psychologically and socially if we bask in the glory together and also support each other in defeat.

Melissa Fothergill does not work for, consult, own shares in or receive funding from any company or organisation that would benefit from this article, and has disclosed no relevant affiliations beyond their academic appointment.

2022-02-08
Previous Post: The Alt-Right on Facebook Are Hijacking Canada’s Trucker Blockade
Next Post: Energy prices: how COVID helped them to surge – and why they won’t go down any time soon