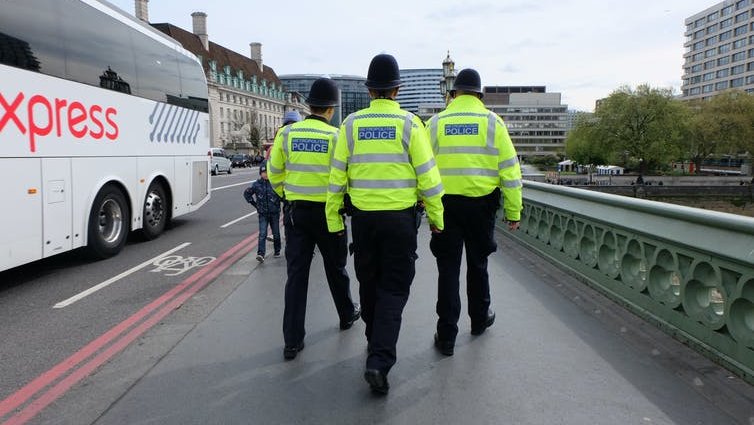 The Metropolitan Police are under fire after an official investigation by the Independent Office for Police Conduct (IOPC) revealed details of officers exchanging discriminatory and misogynistic messages. These included discussions about hitting and raping women, with reference to specific female colleagues, which officers involved dismissed as “banter”.

The report comes at a time of intense focus on how women are treated by police and within their ranks. This was ignited in March 2021, when serving Met officer Wayne Couzens kidnapped, raped and murdered 33-year-old Sarah Everard. The subsequent vigil in London, which was attended by thousands of women, ended in arrests and allegations of “heavy-handed” policing on the part of the Met. Coupled with this, charges for rape and serious sexual offences are at an all-time low. There is mounting evidence to suggest that misogynistic attitudes are infecting policing and affecting the treatment women receive at the hands of officers.

Many have blamed the informal working culture said to exist within the Met, colloquially known as “cop culture”. This concept emerged from policing research in the 1960s and is often identified as a contributing factor to bad police behaviour.

Researchers describe cop culture as male-dominated, action oriented and valuing extreme loyalty among groups of officers. The unique working conditions of policing contribute to this culture, shaped by three key forces – the unique role as a legal authority, the dangers posed to police as a result of this work, and the expectation to produce results in a high-pressure environment.

The basis for “cop culture” is rooted in the stresses and strains that policing brings, which is then internalised by officers as they navigate their roles. In an environment where aggression, physicality and group loyalty is paramount, female colleagues can very quickly find themselves on the outside. This culture tends to attract and retain individuals that are attracted to this particular way of being – and the cycle continues.

Some policing researchers view police culture as having a sinister undertone, stating it promotes macho, sexist and lewd behaviour leading to extreme instances of misogyny. Violence, controlling behaviour and other negative attributes associated with a hypermasculine working environment, are positively rewarded by the group. Researchers have found that police are reluctant to change or challenge these existing norms, including a lack of diversity within forces.

Studies have found similar cultures within other male-dominated occupations, such as the armed forces, where the working culture has been linked to aggressive treatment of female colleagues.

It is important to note that these cultural features can be positive, given the right conditions. One key tenet of policing culture is teamwork – officers need to be able to rely on each other in times of crisis to fulfil their roles. But this may work against officers speaking out when they witness wrongdoing on the part of their colleagues. Indeed, the IOPC concluded in its report that officers who knew about the messages had been afraid to challenge or report them, and those who did were “harassed, humiliated and excluded” by their colleagues. It is clear the culture within the Met needs to change, but as of yet, the organisation has offered no clear solution as to how they might achieve this.

One way to change the culture of police forces is to alter the membership of the organisation itself. Staff turnover can be a catalyst for cultural change. Scholars argue the traditional macho culture of the police has been diluted somewhat by an increase in female officers in recent years.

In the Met police, 29% of current officers are female, just under the national police average of 32.4%. Recruiting more women officers, as many forces are attempting to do, could support new styles of policing and challenge the established masculine culture.

Another suggestion for the Met is to adopt the principles of procedural justice – an attitude of fairness and respect when dealing with wrongdoing – in its own workplace. Research has found that this increases positive behaviour and support for principles of ethical policing, such as high standards of honesty and integrity, and confidence to report wrongdoing at the earliest opportunity. These principles would support a “zero tolerance” approach towards sexual misconduct or discriminatory behaviour in police forces.

Many UK forces have already adopted this approach in their relations with the public. The engage, explain, encourage and enforce approach to COVID-19 restrictions encouraged dialogue over a carrot-and-stick view of the rules. Similar logic should be applied internally to the organisation’s treatment of the rank and file, giving whistleblowers the confidence and support to come forward when needed.

All officers should expect to be treated with respect and dignity by their colleagues. Female officers need to feel they are equal to their male counterparts, and their input and concerns taken as seriously.

The Met has repeatedly denied that there is a culture of misogyny within its ranks. They have insisted that it is only a small number of officers who behave in this manner, an insignificant part of a much larger organisation. However, the IOPC report concluded that “these incidents are not isolated, and are not the result of a few bad apples”. It would serve the Met well to remember the rest of this saying – one bad apple can spoil the entire barrel.

2022-02-07
Previous Post: Pre-workout supplements: why five of the six most common ingredients probably aren’t helping you
Next Post: Sports teams are finally scrapping Native American mascots – on both sides of the Atlantic