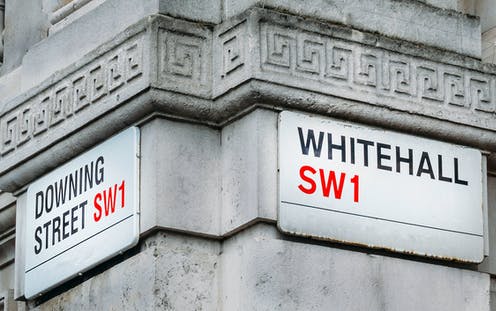 The government’s levelling up strategy to tackle regional inequality promises a “revolution in local democracy”. It seeks to do this largely through regional devolution – setting up more localised governments with their own mayors to give greater autonomy and power to the “left behind” regions.

But the proposed solutions do not match the scale of the challenge set out in the document, and downplay the constitutional and economic revolution required to break away from the highly centralised Westminster model of government.

Despite over two decades of ad hoc devolution across the UK’s nations and through some regional deals in England, Whitehall has not let go of power. The levelling up white paper itself describes the UK as “one of the most centralised countries in the industrialised world”.

Local leaders in England are limited in their powers over welfare, schools and health. They lack meaningful revenue raising powers, while the centralised approach to allocating funding is complex, messy and short term. The plan claims to simplify existing fragmented funding arrangements based on a wide range of different schemes controlled by central government.

The white paper can be credited for acknowledging the UK’s primary governance problem: hypercentralism. But its remedy is too limited. Strengthening local institutions will be inadequate if regions aren’t given meaningful decision making power and control of resources. Yet Whitehall’s direction of policy from London and the Treasury’s control of financial priorities are left untouched.

For example, the new Shared Prosperity Fund “aimed at reducing inequalities between communities” calls for local investment plans to be approved by UK government. Without reform in Whitehall, this top-down culture, where central government controls key policy areas such as health and education, will continue.

The proposals to deliver real devolution lack ambition. The government has promised that any region can negotiate a devolution deal by 2030. But the problems of geography and scale are a concern – there is tension between the size of local government and accountability. Too small, and local government does not have the capacity or economic resources to make real change. Too big, and it becomes remote from local people and their concerns.

The proposed landscape is incoherent. Some areas are large economic conglomerations with clear regional identities, like Greater Manchester. Others are more fragmented, like York and North Yorkshire and Hull and East Yorkshire.

Smaller regions do not have the economic capacity to make real changes. Much of their economic activity is going to be affected by the pull of nearby larger economic centres.

Meanwhile, even large urban centres like Birmingham, Leeds and Manchester, are not going to have the resources to integrate health, education, housing, planning and transport in ways that can overcome many decades of neglect and decline. In this sense, devolving financial resources really does matter when tackling regional inequalities and the current proposed scale of funding is inadequate.

Scotland, with a population of 5.4 million, has been given almost complete autonomy over domestic policy. Yorkshire, also with a population of 5.4 million, has not. The integration of core public services is unlikely to happen in small regions because they will lack the capacity for major infrastructure developments, for example in transport. Competition between regions for scarce resources will be considerable and dependency on Whitehall is unlikely to be broken as a result.

The fundamental problem is that for most public services, accountability for the delivery of services will continue to flow upwards to central government, not downwards to local citizens. If health, education and other services are still run by Whitehall, there is little incentive for them to innovate in response to local needs.

A meaningful system of local power requires rethinking the role and functions of government departments and ministerial responsibility. Real devolution would require representatives at the local level being responsible for policy failure or success. It would see departmental budgets properly redistributed to the localities, but this is unlikely to happen.

The current first-past-the-post electoral system and the consequent need for political point scoring means that there is a strong incentive for accountable ministers to intervene and interfere. It does not allow leaders at the local government level to take risks or develop policy that diverges from national policy goals. If things go wrong, blame still resides in Whitehall.

Real devolution requires a complete change of attitude –- one that allows local governments to make mistakes and to be responsive to their voters, not to ministers and departments. But the proposals here will see the continuation of a range of central government funding pots, monitoring of achievements by Whitehall and the majority of funding determined, distributed and accounted for by the Treasury.

The white paper notes that past experiences which “devolve power without accountability and democratic legitimacy can run … out of steam”. Without reform to Whitehall, this pattern is set to continue.

Dave Richards receives funding from The Nuffield Foundation and the ESRC.