ASMR is linked to anxiety and neuroticism, our new research finds 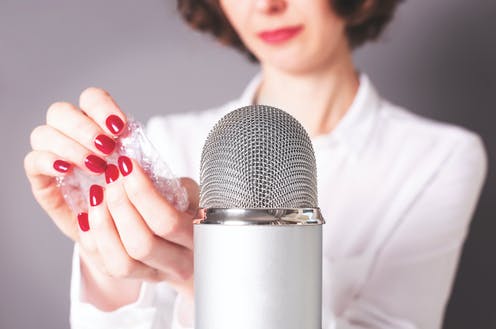 The autonomous sensory meridian response, or ASMR, is described as an intensely pleasant tingling sensation originating in the scalp and neck, and spreading down the body. ASMR is elicited by a range of video and auditory triggers, such as watching someone pretend to perform relaxing actions like massaging or hair brushing, or listening to soft sounds such as whispers or tapping. There are countless ASMR videos on forums such as YouTube attracting thousands, or in some instances millions, of subscribers and hits.

The triggers vary from person to person. But for millions of people worldwide, ASMR is a go-to for relaxation, sleep and to reduce stress.

While research interest in the phenomenon is growing, there’s a lot we still don’t know about ASMR. For example, why do some people experience tingles and others don’t? Could understanding the personality traits associated with ASMR guide us when thinking about ASMR as a potential therapeutic intervention?

Emerging literature suggests that people who are capable of experiencing ASMR exhibit greater levels of neuroticism. Neuroticism is a personality trait typically defined as a tendency towards depression, self-doubt and other negative feelings.

Neuroticism is also associated with a tendency to experience negative emotional states such as anxiety. And we know that people who watch ASMR regularly may do so to relax or reduce stress, potentially indicating elevated levels of anxiety.

Currently there is very little research linking neuroticism with anxiety in people who experience ASMR, or into the effect of watching ASMR videos on anxiety. Our new study aimed to add to the evidence in these areas.

À lire aussi :
ASMR: what we know so far about this unique brain phenomenon – and what we don’t

We recruited 36 people who experience ASMR and 28 people who don’t. All participants watched a five-minute ASMR video that was a compilation of multiple common ASMR triggers.

Before watching the video, the participants completed questionnaires assessing their levels of neuroticism, trait anxiety (a predisposition to experience ongoing anxiety), and state anxiety (their anxiety levels in the moment). They also answered questions about their state anxiety after viewing the video.

In contrast, there was no difference in non-experiencers’ state anxiety scores before and after watching the video. So the ASMR video alleviated anxiety, but only among the ASMR-experiencers.

However, when we looked at the data in a different way, we found that a propensity for greater neuroticism and anxiety overall – regardless of whether participants experienced ASMR or not – was associated with the ASMR video having a positive effect on anxiety levels.

This emphasises the importance of individual personality traits when thinking about ASMR as a potential therapeutic intervention. It also shows us that the benefits of watching ASMR videos can be experienced even if you don’t necessarily feel the “tingle”.

What does this all mean?

We have provided new evidence regarding the traits that may characterise people who experience ASMR, and an indication that ASMR could have potential as an alternative treatment for anxiety.

Notably, in our study, watching the ASMR video reduced state anxiety among people who experience ASMR. While this seems logical considering that people who seek out ASMR often do so for therapeutic reasons, the results of our study also suggest that ASMR may have anxiety-reducing effects more generally.

So if people are prone to neuroticism and/or anxiety, they may benefit from watching ASMR – even if they don’t routinely watch ASMR videos or experience ASMR tingles.

Our study was only in a relatively small number of people, and we cannot discount that the targeted group most likely had a predisposition to seek out ASMR. So it will be important to carry out research with more ASMR-naive participants.

Certainly, further research into the use of ASMR as a psychological intervention will be important to better understand how this may help people who experience anxiety.


In the meantime, findings from recent neuroimaging studies are beginning to shed more light on this phenomenon. Using a type of brain imaging called electroenchephalograpy (EEG), researchers have shown that the electrical activity known to be associated with relaxation (including mindfulness meditation) increased in response to ASMR stimuli. This was true even when participants were performing a mentally demanding task.

These studies suggest that ASMR leads to changes in brain activity typically associated with a relaxed state, possibly even during day-to-day activities. More neuroimaging research will compliment behavioural studies and help us to identify the mechanisms that could underpin ASMR’s anxiety-reducing capabilities.