Ukraine: Russians I met recently in St Petersburg believe there will be no invasion – foreign policy expert 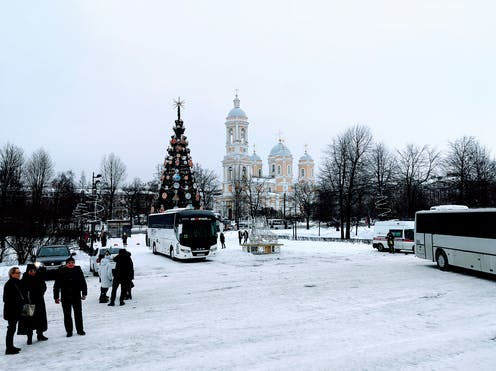 While preparing for a trip to Russia in late December 2021, I was half-joking to friends that my return to the UK could well be delayed either by COVID or a Russian invasion of Ukraine. The threat of an imminent war was permeating the western media by that stage, so my concerns seemed perfectly reasonable from their viewpoint.

Yet, whenever I touched on the subject of a possible invasion of Ukraine to people in Russia, an eyebrow was raised in surprise and incredulity. No one I spoke with during my two weeks in St Petersburg seriously considered the possibility of a large-scale Russian invasion of Ukraine.

These attitudes are borne out by opinion polls from the Levada Centre, Russia’s last remaining independent polling company. More than half of those polled in early December believed there would be no war with Ukraine. What’s more, these attitudes haven’t changed much over the past year and are broadly in line with views since 2015.

When it comes to blame for the current tensions and Russia’s role in them, the majority of people who expressed an opinion put responsibility on the US and Nato (50%) and another 16% on Ukraine itself. Only a tiny minority blamed the Russian government (4%) or the separatist republics in eastern Ukraine (3%). The idea that Russia might invade on its own initiative is simply not credible for the vast majority of its citizens.

The only scenario that could lead to an armed conflict with Ukraine is a military escalation around the separatist Donbas. A shaky ceasefire there is regularly broken by both government and separatist forces. The peace deal which was supposed to end that conflict, signed in Minsk in February 2015, remains in limbo as both sides blame each other for the failure to implement it.

Worryingly, but entirely predictably, both Russian and US officials have been blaming each other for preparing a provocation in the Donbas to use as a casus belli. The Russian defence minister, Sergei Shoygu, claimed on December 21 that a US private military company was preparing a chemical attack around Donetsk, one of the two capitals of the breakaway republics in the Donbas.

Pentagon officials, meanwhile, accused Moscow of sending a group of undercover commandos to perpetuate a “false flag” operation in the region. It’s unclear when this operation is supposed to happen or what it might entail.

There are regular ceasefire violations by both sides, including the shelling of separatist territories, with military and civilian deaths; the capture of a village in the neutral zone; and even assassinations of prominent rebel leaders. This included the assassination in 2018 of the popular president of the unrecognised Donetsk republic, Alexander Zakharchenko, which the Kremlin blamed on Ukraine.

Just this week, pro-Russian rebels are accusing Ukraine of preparing an offensive in the region. Substantial armed clashes in Donbas are possible – the question is whether this will develop into a wider war.

What the experts say

Popular disbelief about suggestions of Moscow’s imminent invasion of Ukraine is shared in the Russian expert community. Put bluntly, there is no convincing argument to explain what such an invasion could possibly achieve.

As the US and the EU leaders have repeatedly made clear, any invasion by the Russian regular troops would lead to “crippling” sanctions against the Russian economy. The Kremlin put in a lot of effort since the first round of sanctions was imposed against it in 2014 to shield itself against further sanctions by building its foreign currency reserves to a record US$620 billion (£459 billion); divesting from US dollars into gold and the Chinese renminbi; and reducing its exposure to western loans while accepting more Chinese investment.

It also developed its own MIR payment service to replace Visa and MasterCard if their use is blocked and Russia’s national interbank transfer system is denied access to SWIFT. According to some reports there is strong opposition to the latter move by many European countries, and indeed the impact of these sanctions would be massive if they were to go ahead. The Russian economy would be unlikely to collapse, but the growth and relative prosperity which is evident on the streets of large Russian cities would be nigh on impossible to keep.

Of course, this would bolster the Putin regime’s domestic stability. Rallying around the flag can have some short term compensatory effect in case of large-scale hostilities, but the Russian public has not been prepared to expect anything like a full-scale war with all the costs and casualties that would follow.

So, while both the Russian public and the expert community have a rather dim view of a possible war, there’s no denying the hardening of Moscow’s rhetoric and a build up of its forces around Ukraine.

Putin openly suggested that building up tensions was a key to successful diplomacy. If that was the strategy, it has certainly worked so far. Once the reports of troops build-up began circulating in the US media, the US administration agreed to discuss the issues on top of Moscow’s agenda, principally issues of European security and the eastward expansion of Nato.

The question is how far the Kremlin is prepared to take its brinkmanship. Ultimately, to sustain tensions as credible, you must be prepared to act on your threats. Yet, if the worst comes to the worst, and there is a large-scale war between Russia and Ukraine, the most astonished people will be the Russian public itself.

What did you think of this article?
Great | Good | Meh | Weak

Alexander Titov does not work for, consult, own shares in or receive funding from any company or organisation that would benefit from this article, and has disclosed no relevant affiliations beyond their academic appointment.

2022-01-26
Previous Post: Weekly Covid cases fall another 13% as Omicron deaths have peaked
Next Post: Three ways for Sony to avoid getting left behind by Microsoft