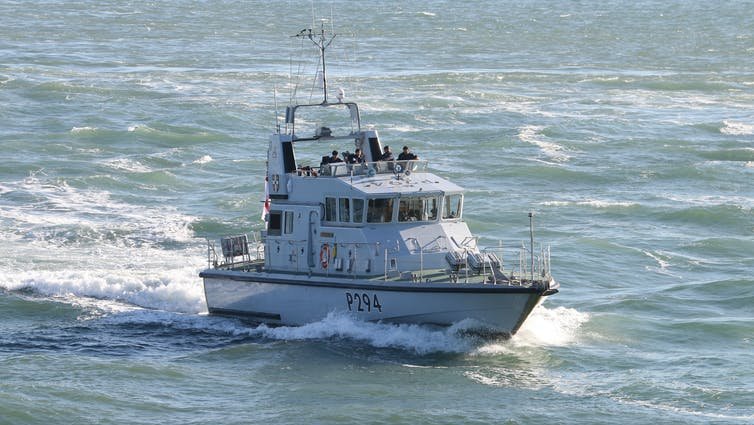 The Home Office has announced a plan to bring in the Royal Navy to take charge of policing the English Channel after the number of migrants attempting the crossing in small boats tripled in 2021. Full details of the plan have not been revealed, but appear to involve the navy taking a leadership and planning role, as well as possibly providing additional vessels to augment the Border Force cutters already at sea.

Certainly, at first glance, the navy has the potential to bring more resources to the problem. Border Force currently operates five cutters and six coastal patrol vessels, whereas the navy has many more ships suited to maritime security tasks. These include 16 Archer class patrol vessels and eight of the larger and more capable River class offshore patrol vessels.

Yet numbers can be deceiving. The Archers and Rivers are already in high demand. Two of the Rivers, HMS Tamar and HMS Spey, are forward deployed to the Indo-Pacific. Others are assigned to areas of longstanding UK interest, such as the Caribbean and the Falklands, or now patrol the UK’s fishing waters following Brexit. Likewise, two of the Archers are deployed to the Gibraltar Squadron, another two assigned to security duties at the Faslane nuclear submarine base in Scotland, while the others play important roles with University Royal Naval Units.

With so many vessels already in use elsewhere, it seems unlikely that the Admiralty will welcome new deployments to the Channel -– especially so soon after an announcement that Border Force is receiving money for an upgraded fleet of cutters.

Pushing back on pushbacks

But even if capacity could be found, it’s unclear how naval involvement could help to change the situation in the Channel.

The Home Office’s ambition has been to “push back” small boats – that is using ships to prevent access to British waters and waiting for the French coastguard to return the vessels. Perhaps there is a hope that the Royal Navy will put some backbone into this policy, especially given that Border Force’s union has recently threatened strikes if pushbacks are implemented.

Any such hopes are likely to be in vain. There is a duty within international law for a ship to attempt the rescue of persons at danger at sea. This is enshrined in Article 98 of the United Nations Convention of the Law of the Sea and elsewhere. The Royal Navy is just as bound by the law of the sea as Border Force.

When navies in other countries have ignored their duties to International Law, tragedies have followed. Thailand’s Royal Navy, for example, has been widely pilloried for its policy of pushing back Rohingya refugees, with hundreds thought to have died.

The navy has already indicated that it has little appetite for such pushbacks, and any extra capacity it can bring is most likely to be deployed in search and rescue tasks.

Indeed, saving lives at sea is ingrained in the navy’s ethos and operational history. It played a key role in UK maritime search and rescue until 2015 and humanitarian assistance remains one of its core missions. During wartime, Royal Navy ships regularly rescued the stricken crews of sunken enemy warships where they could, including many from the Bismarck.

What the navy can do

If the navy cannot easily contribute vessels or engage in pushbacks, its primary contribution may be to share information and help monitor the Channel. In this way, it could serve as part of wider maritime security architecture in which each agency plays its own role in preventing either the crossings or tragedies from occurring.

But the announcement, by the UK home secretary, Priti Patel, comes as a surprise because that is exactly what’s already happening.

Since 2010, the UK has invested considerable effort in creating an integrated maritime security structure. The Joint Maritime Security Centre, established in 2020, coordinates the UK’s maritime assets and helps different agencies to work together at sea. Hosted by the navy, it enables cross-agency information sharing through its Maritime Domain Awareness programme.

In essence, the navy is already having an operational impact. It is difficult to see how it can move beyond this or would want to do so. The UK needs to move beyond populist announcements on the small boat problem and develop a response along three lines.

First, it should continue its efforts to develop the maritime security architecture that facilitates interagency working. Second, it needs to foster closer cooperation with France and Belgium to help manage this shared problem of human desperation and misery.

Finally, it should recognise that policing at sea can only address symptoms rather than causes of increased Channel crossings. A long-term solution requires the reestablishment of humane and accessible refugee and migration routes into the UK.

Scott Edwards does not work for, consult, own shares in or receive funding from any company or organization that would benefit from this article, and has disclosed no relevant affiliations beyond their academic appointment.

2022-01-21
Previous Post: Yard Act – The Overload review: Wry, words-first wit
Next Post: The US Refuses to Fall in Love With Electric Cars