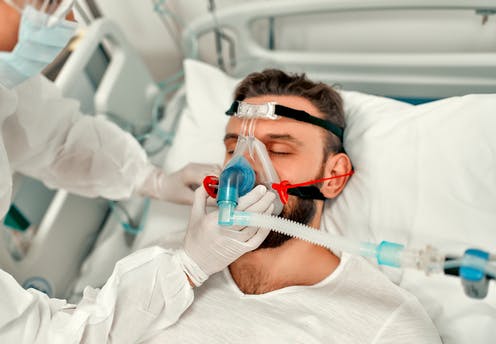 As winter pressures have mounted on the NHS, both health staff and politicians have grown increasingly frustrated with the number of unvaccinated patients needing treatment for COVID. The risk of being hospitalised with COVID is substantially greater for those that haven’t had a vaccine. The latest data suggests that more than 60% of COVID patients requiring critical care in England haven’t been vaccinated.

Nevertheless, despite debates over whether COVID vaccines should be mandatory – given that they clearly protect a person’s health and have wider social benefits – uptake has largely remained voluntary in England. Vaccines are obligatory only for those working in the care and (from April 2022) health sectors.

Even with omicron sending cases surging, Sajid Javid, the UK health secretary, dismissed universal mandatory vaccination, saying that “ethically it’s wrong”. What, though, should the consequences be for a person who comes to suffer ill health with COVID having chosen not to be vaccinated?

In Singapore, the answer is that they must pay for their treatment. A proposal along the same lines has been debated in New South Wales in Australia. Limiting care for unvaccinated patients has also been a publicly debated question in the UK. But should choosing not to be vaccinated really result in a person being deprioritised or charged by the NHS?

Using policies to influence the decisions people make in response to the pandemic is not problematic in itself. Indeed, some coronavirus-related responsibilities – such as lockdown restrictions and self-isolation rules – have been supported by the threat of legal punishment to ensure they are met.

Meeting other responsibilities has been encouraged through “softer” measures. Information campaigns and public guidance have been used to promote vaccine uptake. And having to show a COVID pass to attend particular events or venues has been an indirect way of increasing rates of vaccination.

In a context of having finite healthcare resources to allocate, there’s an intuitive pull to the idea that someone who has made a clear, poor decision regarding their health shouldn’t be prioritised – and that they should be responsible for the costs.

But, as I have argued previously, there are strong reasons, based in medical ethics, to resist the attraction of such an argument. Such a policy would undermine two of the seven principles underpinning the NHS: that treatment is provided to all who need it; and that the provision of treatment is based on clinical need, not ability to pay.

Just by refusing vaccines, a person cannot be deemed to have also refused consent to receive treatments for COVID. People who are unvaccinated have not waived their positive right to healthcare. Rather, the NHS would be denying treatment that unvaccinated patients are due.

A policy to deprioritise unvaccinated patients for care, or to charge them for such care, would not be about denying a privilege or preference. It would be punitively discriminatory, denying a fundamental and universal positive right. And crucially, despite the apparent starkness of vaccine refusal, such a policy shows too little subtlety in understanding responsibility for health.

For better and for worse, as individuals alone we are demonstrably not responsible for many of our health opportunities and outcomes. Policies that would punitively pinpoint responsibility to individuals – with significant costs to them – therefore need careful justification. This includes policies in relation to apparently straightforward choices that are harmful to health, such as smoking, poor diet or refusing vaccines.

The evidence indicates that when it comes to choices people make about their health, there are systemic influences in the background – factors that may themselves be changed, such as the social advantages or disadvantages that people experience. But these are beyond the influence of individuals acting alone. Looking just at individual responsibility and vaccine uptake requires us to deny that there’s any meaning or relevance, for example, to systemic influences that explain lower levels of vaccination among some ethnic minority communities.

And would a punitive “responsibilising” policy, with its moral undertones in justice, be coherent with other individual and social responsibilities that we have? Given how stark the choice is between having a vaccine or not, refusing may be interpreted as being obviously irresponsible in the context of trying to control COVID. But so too could other choices, some of which are also quite stark, such as choosing not to socially distance, for example.

A sound reason would be needed for singling out vaccine refusal. And even if that could be found, and the government did want to punish or otherwise treat people who refuse to be vaccinated differently, the NHS is not the right place to do that. “The punishment fits the crime,” it might be said. But the firm reality is that vaccine refusal is not crime, and even if it were, denial of healthcare is not a fair or humane punishment.

At the extreme (which I would resist), parliament could criminalise non-vaccination. Yet even then, we would be right to punish offenders through the criminal justice system rather than by denying healthcare; just as we would do a person who comes to harm as a result of, for example, drink-driving.

Sajid Javid may be right to declare that mandatory vaccination is ethically wrong. But so would be denial of healthcare rights where that care is clinically needed – even if a person may (at least in some senses) be responsible for that need having arisen.

John Coggon is an honorary member of the UK Faculty of Public Health, a member of the Nuffield Council on Bioethics and sits on the BMJ's ethics committee. He also is (and has been) a member of a number of national expert groups, convened by NHS England and NHS Improvement, to determine the commissioning position around treatments for COVID across the NHS in England, Northern Ireland, Scotland and Wales. Within the past 36 months Professor Coggon is or has been on research projects funded by the UK Arts and Humanities Research Council, the UK Economic and Social Research Council, the UK Prevention Research Partnership, and the Wellcome Trust, and he has a grant from the Wellcome Trust to provide scholarships on the University of Bristol’s LLM in Health, Law and Society.
The work on which this piece is based was supported by the UK Ethics Accelerator Grant, reference UKRI/AHRC:AH/V013947/1.
All views expressed in this piece are personal to the author and should not be taken as being held by any of the above organisations or other organisations with which the author may be associated.

2022-01-20
Previous Post: ‘Baker’ looks a tasty proposition to sample!
Next Post: Why does Cristiano Ronaldo do his ‘Siu’ celebration, and what does it mean?