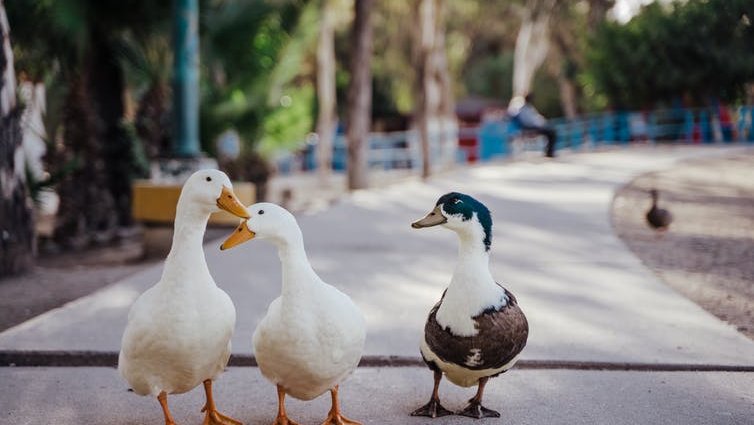 Have you ever watched a duck sleep and wondered how it keeps one eye open? Ducks, like many other birds, sleep with one half of the brain awake while the other half sleeps. This is called “unihemispheric sleep” and allows the animal to monitor the environment for predators while getting the rest it needs.

Advances in sleep science show that the human brain also monitors its surroundings during sleep. Since our eyes are closed, this monitoring must rely mostly on hearing.

The sleeping brain faces a difficult balancing act. To protect sleep, it has to suppress harmless sounds, like your partner turning in late or the sound of raindrops falling on the roof. But it has to be ready to wake you up if a potentially dangerous noise is heard.

A new study, published in the Journal of Neuroscience, suggests that one way the brain discriminates between safe and potentially harmful sounds is by reacting differently to familiar and unfamiliar voices.

Researchers at the University of Salzburg in Austria recruited 17 volunteers who slept overnight in a sleep laboratory. While they were sleeping, the electrical activity of their brains was recorded using electroencephalography (EEG).

Throughout the night, the researchers played the sleeping volunteers audio recordings softly enough so as not to wake them up. In the recordings, a voice read names out loud, including the volunteer’s own name and other names. Sometimes the voice was a person familiar to them, such as their parent or partner, and sometimes it was an unfamiliar voice.

The researchers looked for differences in the brain’s response to the familiar and unfamiliar voices. They identified two brain responses that changed depending on the familiarity of the voice: K-complexes and micro-arousals.

Read more:
We’re sleeping more in lockdown, but the quality is worse


K-complexes are sharp waves seen in the sleep EEG that last about half a second. The brain can generate them spontaneously, but most of the time they happen after an outside disturbance, such as someone lightly touching you when you sleep. They are thought to protect sleep by stopping you from waking up if the disturbance is likely to be harmless.

The researchers found that unfamiliar voices triggered more K-complexes than familiar voices. They suggest that sounds that could be more threatening are more likely to wake you up, so the brain has to work harder to suppress them.

Interestingly, the difference in the K-complexes between familiar and unfamiliar voices disappeared in the second half of the night. This may reflect the brain learning that the unfamiliar voice is safe.

Unfamiliar voices also triggered more micro-arousals than familiar voices. Micro-arousals are a normal part of sleep and appear in the EEG as a brief mix of wake and sleep-like brain activity. Like K-complexes, they can happen spontaneously or after an outside disturbance. They can last for several seconds but don’t usually result in the person waking up.

The function of micro-arousals is not well understood. Previous research has indicated they may play a part in processing information from the environment to determine if it could be harmful or not.

What does this all mean?

Although this is a small study, the findings add evidence to existing theories that explain how the human brain protects us from danger during sleep. Scientists have previously proposed that the brain enters a “sentinel processing mode” or a “standby mode” while we sleep.

This means the brain continues to monitor events in the environment, even as consciousness fades as we fall deeper into sleep. The incoming information is processed to decide whether it’s relevant and dangerous. Depending on this evaluation, the brain either protects sleep or wakes us up.

The results of this study suggest that the identity of a speaker is a potential cue pointing to danger: familiar speakers are deemed safe, while unfamiliar speakers could pose a threat. The evolutionary benefits are easy to appreciate.

But it’s difficult to prove that the increased K-complexes and micro-arousals in response to unfamiliar voices represent the brain making a judgment about possible danger. It could also simply be that new voices are more attention grabbing.

If you struggle to get a good night’s sleep in a new environment like a hotel room, you now know why. Like the duck with its one eye open, your sleeping brain is busy getting used to its new surroundings, firing off more K-complexes and micro-arousals than usual. But it’s also learning about the environment and will soon adjust. You can help by hitting the stop button on that podcast or TV show and let yourself fall asleep enjoying the safety found in silence.

Jakke Tamminen receives funding from the Economic and Social Research Council and The Waterloo Foundation.