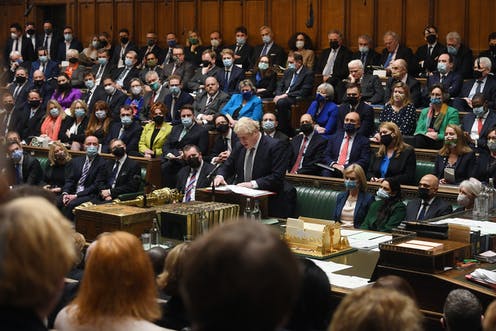 It’s very rare that a civil servant becomes the focus of public debate and discussion. It’s even rarer for them to find their face splashed on every front page under a headline proclaiming they hold the fate of a prime minister in their hands.

But when Sue Gray was asked to investigate and report on “gatherings” held at 10 Downing Street during the early pandemic, her status as “the most powerful person you’ve never heard of” was suddenly shattered. By this point, you’ve almost definitely heard of her. But do we really understand what power she has in relation to Boris Johnson’s premiership?

Gray is a hugely respected civil servant who once took a career break in the 1980s to run a pub in Newry, Northern Ireland. The pub attracted drinkers from across the sectarian divide and maintaining order may well have prepared her for the challenges of regulating government.

She would later apply these skills as the Cabinet Office’s head of ethics and propriety (2012-2018) where she oversaw inquiries into a number of tricky topics, including allegations concerning the Conservative MP Damian Green and also the “plebgate” inquiry of 2014. From 2018-2021 Gray served as the permanent secretary of the department of finance in Northern Ireland and then returned to the Cabinet Office in May 2021 as second permanent secretary with responsibility for the union and constitution directorate.

A stellar career indeed, but all these years of service have not necessarily translated into great power when it comes to Gray’s investigation. It’s vital to note that this is an internal official investigation. It is not a parliamentary inquiry, let alone an independent statutory inquiry. This means that in strict constitutional terms the final report will end up on the desk of the prime minister.

Depending on what the report finds, it could lead to officials facing disciplinary proceedings and possibly even dismissal. But specific HR matters like this will remain confidential and it will be up to the cabinet secretary to decide how to proceed. The fact that Gray only took on the investigation when the cabinet secretary was himself forced to step down from leading the inquiry makes the whole affair even more complicated.

The inquiry does not have the power to determine whether the law was broken or not, and the Metropolitan Police have generally been reluctant to get involved. Even if the Gray report outlines serious breaches of the ministerial code, it is Boris Johnson who decides what action, if any, should be taken.

But in some ways, an assessment of Gray’s formal powers or constitutional position risks completely missing the point. Her inquiry matters for one simple reason: it may provide the spark and the ammunition that brings Johson’s government to an end.

The basis of this argument is to be found in the vast wealth of political science on blame-avoidance behaviour and intra-party politics. Put very simply, Boris Johnson has always adopted a high-risk approach to political life.

For him, rules were designed to be broken, conventions cast aside, restrictions rejected on the basis that such almost blame-seeking behaviour sustained not only almost constant media attention on him but also celebrity status among the public. This is exactly why Tom Bower’s biography of Johson is sub-titled The Gambler. It’s also why constitutional commentators such as Peter Hennessy have sought to focus attention on the weakness of a constitution that relies almost on the voluntary self-restraint of the executive.

Johnson’s premiership has therefore been based on a very specific bargain. A largely reluctant parliamentary party begrudgingly supported Johnson’s brashness and buffoonery on the basis that he could at least attract and maintain the support of large sections of the public.

But if his popularity takes a nosedive then the bargain will quickly be terminated.

It’s this contextual dimension that explains exactly why Gray and her report are the focus of such febrile excitement. Depending upon what it finds and the evidence it presents it may well prove to be the straw the broke the camel’s back. Johnson’s brand has become tarnished, his popularity levels seriously dented, and his capital within the parliamentary party appears to be running on vapors.

Put slightly differently, Johnson appears to have little in the bank in terms of friends or favours to call in that might help him survive a potentially damming report. And if evidence emerges that he did know more than he has previously admitted then a charge of “misleading the House” could prove terminal.

The Gray inquiry is not really about parties, gatherings or “bring your own booze”. It is a lightning rod. It provides a test case for how to litigate multiple long-running anxieties and concerns about the prime minister’s approach to governing. These are concerns that were elaborated with great skill in a recent report by the Committee on Standards in Public Life.

Gray has no interest in bringing prime ministers down. She has no power to bring the prime minister down. But because the essential focus of her inquiry is on whether Johnson can be trusted to follow the rules or tell the truth, it resonates far beyond its formal terms of reference or status.

The only thing we therefore know with any certainty is that the publication of the Gray report promises to be anything but dull.

Matthew Flinders does not work for, consult, own shares in or receive funding from any company or organization that would benefit from this article, and has disclosed no relevant affiliations beyond their academic appointment.

2022-01-18
Previous Post: Man arrested by Gardaí investigating the murder of Ashling Murphy
Next Post: The cost-of-living crisis will put more pressure on shoppers than COVID