‘Go toss your cookies elsewhere’: ten phrases that cause confusion across the Anglosphere 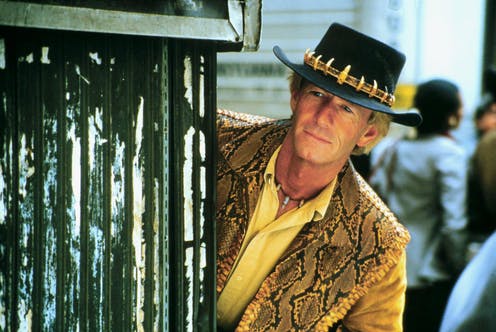 An annual list of “banished words” compiled by Lake Superior State University in Michigan has caused a stir by including the distinctively Australian phrase “no worries”. Dislike of this idiom appears to be based on the misconception that it is an instruction not to worry. “If I’m not worried, I don’t want anyone telling me not to worry”, complained one person who nominated the phrase for boycotting, adding: “If I am upset, I want to discuss being upset.”

Originating in Australian English in the 1960s, the phrase is in fact used to mean “all right” or “fine”, or to acknowledge thanks. Its international spread was encouraged by the success of the 1986 film Crocodile Dundee and the long-running TV series Neighbours. Since linguistic misunderstandings of this kind are an inevitable feature of a language that is spread across the globe, here is a handy guide to some potential areas of confusion.

1. Caught with yours pants down

Being caught with your pants down, that is, being taken off guard in an embarrassing situation, carries different degrees of humiliation depending on which side of the Atlantic you are on at the time. That’s because in the US pants refer to what the Brits call trousers, while in Britain it refers to what people wear under their trousers.

In Scotland it is possible to be caught trousered with your pants down, since “trousered” is a term for being drunk. Its recent inclusion in the Oxford English Dictionary is credited to its being the preferred term of comedian Billy Connolly. In many parts of the UK, the verb “to trouser” can also be synonymous with “to pocket”, usually cash.

This isn’t a term for people who attempt to pass through customs with small tropical birds secreted about their person, but rather an Australian word for a pair of close-fitting swimming trunks. These days they are often associated with former prime minister Tony Abbott, who has a penchant for being photographed thus attired.

Another item of clothing commonly sported on the Australian beach is thongs. This not the skimpy undergarment, however, but an alternative name for flip-flops.

As you may know, what the British call “chips” are known as French fries in the US – despite George W. Bush’s attempts to change this to “freedom fries” when the French wouldn’t join the coalition of the willing to invade Iraq in 2003. Americans use the term chips to refer to crisps, as do Australians.

Whichever fried potato snack you’re enjoying, having someone urinate on them would certainly spoil the treat. But this idiom more likely refers to wood chips used in kindling, and so signifies spoiling someone’s plans or taking away their enjoyment of something. It has a similar force to the expression piss on someone’s bonfire, which is intended to convey an equivalent dampening effect, albeit one that is less likely to put the fire out entirely.

This is not an instruction to a child in a music lesson to play a piece of music, but rather the Scottish term for a snack taken to school to eat at break time. It derives from the Scottish use of “piece” to mean sandwich – although it can refer to any kind of light bite, and not necessarily a healthy one.

Most of us are familiar with the American use of “cookie” to refer to what in England is called a biscuit. But to toss your cookies isn’t an invitation to share baked treats, but an idiom meaning “be sick” – known in Australia as “go for the big spit”.

If someone in Glasgow offers you a ginger you might well expect a can of ginger beer or perhaps even the bright orange Scottish favourite Irn Bru. But in the west of Scotland, “ginger” is in fact a generic term for any flavour of fizzy drink.

Given this, you might be forgiven for assuming that an offer to warm your ginger means to take the chill off a can of Coke. But this phrase actually draws on a different Scottish use of “ginger” to mean backside, and so means: “give you a beating”.

This is not an invitation to become a secret agent or to catch up on your email, but instead a Scottish phrase meaning “do the shopping”. In the US this involves a trip to the grocery store, the equivalent of a British corner shop; in Australia and New Zealand these are known as milk bars or mixed businesses, while in South Africa they are termed cafés or tea rooms. To make matters more confusing, in Indian English a café or restaurant is known as a “hotel”. Meanwhile Australians use the word “hotel” to mean the pub.

This expression – which comes in the even odder variant “eat parrot bottom” – is a Caribbean phrase referring to someone who is excessively talkative. Someone prone to incessant chat in Scotland is known as a “blether”, from an Old Norse word meaning “talk nonsense”.

In Nigerian English, the word gist, meaning “essence” or “main part”, has been extended to refer to idle chat and gossip, while Irish English uses “pant”. Although this may involve tales of people caught with their pants down, the word itself has nothing to do with underpants or trousers – it originates from a shortening of pantomime.

This isn’t the latest development in artificial intelligence but the South African term for a traffic light, or what Americans call a stop light. The word robot is of Czech origin, from robota, meaning “forced labour”. It was coined by Karel Čapek in the 1920 play R.U.R.: Rossum’s Universal Robots to refer to mass-produced workers made from artificially synthesised material.

The verb “prepone” is used in Indian English to mean bring something forward in time. As such it offers a handy opposite to postpone. And if postponing until tomorrow isn’t far enough away, in Nigerian English it is possible to put something off until “next tomorrow”.

This word refers to the day after tomorrow, the equivalent of the 16th-century “overmorrow” (from German übermorgen), whose demise has left a gap in other varieties of English.

Simon Horobin does not work for, consult, own shares in or receive funding from any company or organisation that would benefit from this article, and has disclosed no relevant affiliations beyond their academic appointment.

2022-01-11
Previous Post: Hong Kong: how colonial-era laws are being used to shut down independent journalism
Next Post: Driving in old age: why Britons would like more help in deciding when to stop