COVID is caused by a virus – so why are researchers treating it with antibiotics? 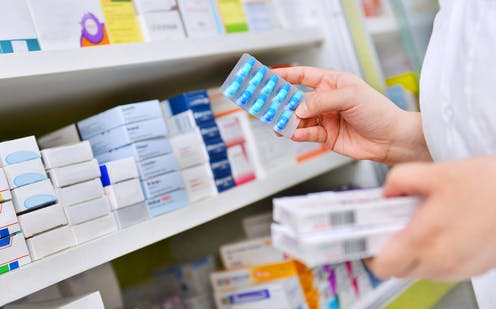 If you have a cold, don’t ask your doctor for antibiotics – that’s the golden rule. They’re for bacterial infections, not viral ones. We’re told not only that they won’t work, but that by using antibiotics when they aren’t needed, we’re helping bacteria become resistant to them.

Yet in a recent study conducted in an Egyptian hospital, we showed that treating moderate-to-severe COVID patients with either one of two antibiotics (ceftazidime or cefepime, in combination with a steroid) resulted in similar recovery times compared to patients given standard treatment.

This standard treatment, authorised by the Egyptian government and approved by the World Health Organization, was made up of at least seven different medications, suggesting that treating COVID with antibiotics could be a much simpler way of making people better.

Yet by doing this, we went against the established medical convention that antibiotics aren’t for viruses. So why did we break this rule?

Necessity the mother of invention

Traditionally, creating new drugs to treat diseases takes a long time. Trying to develop a new treatment can take years, costs a lot of money, and has a very low success rate. Nevertheless, this process is generally acceptable when targeting common diseases.

However, this time-consuming process is not viable when there is a high threat posed by an emerging infectious disease, such as Zika, Ebola, Mers and now COVID. Without quick action or effective treatments that are ready to go, emerging diseases can evolve into pandemics that take a lot of lives. There have been hundreds of millions of confirmed cases of COVID, for example, and over 5.4 million deaths globally.

Because of this, when faced with a new threat, drug developers and major pharmaceutical companies look for quicker alternatives to the typical drug-development process. One practical strategy is drug repurposing. This is where drugs already created and approved for one use are tested to see if they can also help treat the new disease.

As the drugs have already been shown to be safe, and plenty is known about how they work, this is potentially a much less risky and time-consuming way of coming up with a treatment for the new disease. It’s a strategy that’s been used often in the past – and one my colleagues and I wanted to try to use it during COVID because of the pressing need.

Drug repurposing begins by using computer-based techniques to model how existing drugs and the new disease-causing agent – in this case the coronavirus – might interact. Drugs that show promise are then tested in real-life lab studies to validate the computer’s findings and confirm that they could be of clinical use.

With a viral disease like COVID, a drug considered for repurposing should show one of these three qualities: it should either be able to inhibit one or more stages of the coronavirus’s replication cycle; relieve the bad effects of the virus; or manipulate the immune system so that the body can deal with the virus.

And surprisingly, antibiotics are often the substances that show potential. Although viruses are different to bacteria, they are sometimes also susceptible to antibiotics. The statement that antibiotics don’t work against viruses doesn’t apply 100% of the time.

For example, in response to the Zika crisis five or so years ago, an American study evaluated more than 2,000 drugs already approved by the US Food and Drug Administration to see if they could potentially be safely used in pregnancy against the virus. The study found that the antibiotic azithromycin could reduce the proliferation of the virus in the brains of unborn children, thus potentially protecting against microcephaly, a condition caused by the virus in newborns.

Separately, testing also showed that the antibiotic novobiocin had a strong antiviral effect against the Zika virus. And a 2016 drug-repurposing study conducted in Thailand identified minocycline as a promising antiviral drug against dengue virus, with this antibiotic inhibiting the virus’s growth at various stages of its life cycle.

All of these studies gave us confidence that repurposing antibiotics as COVID treatments was a plausible idea.

But why ceftazidime or cefepime?

Research had already shown that a number of antibiotics were good at stopping the coronavirus reproducing in lab tests – including ceftazidime and others of the same class, which is known as “beta-lactams”. We therefore knew this drug class had potential.

And when we ran computer simulations of how ceftazidime and cefepime (another beta-lactam) would interact with the virus, they were both effective at disrupting its protease, a key enzyme the virus uses to reproduce.

Ceftazidime and cefepime are also broad-spectrum antibiotics that are widely used to treat critically ill patients who pick up infections in hospital. As COVID patients often end up with other infections at the same time, we also thought these drugs might help badly ill patients by clearing other infections they might have, helping prevent conditions such as pneumonia.

However, it isn’t clear how much of the antibiotics’ effect in our Egyptian hospital study was down to clearing coinfections versus how much was due to them attacking the coronavirus directly. Indeed, the notion that beta-lactams have antiviral properties is based on computer simulations and lab experiments – it hasn’t been definitively proven.

Nevertheless, our work has made a good case that these drugs can fight the coronavirus. While we still need to use antibiotics carefully, they might therefore have a role to play against COVID in the future.

Mostafa Rateb does not work for, consult, own shares in or receive funding from any company or organization that would benefit from this article, and has disclosed no relevant affiliations beyond their academic appointment.

2022-01-06
Previous Post: This Is the Year of the Shadow Pandemic
Next Post: Devonport MP slams MoD for waste as armed forces cut