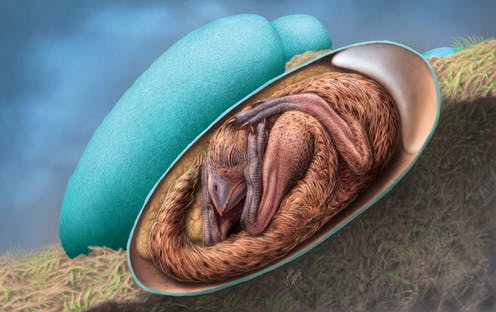 Dinosaur embryos are key to our understanding of how dinosaurs developed. But they’re also very rare. While remains of dinosaur embryos have been discovered occasionally over recent decades, most of them have been incomplete, with the bones dislocated.

So the discovery of an almost intact dinosaur embryo inside an egg, dating back 72 to 66 million years, has come as an exciting surprise. Based on its anatomy as well as the microscopic features of the eggshell, this little creature has been identified as an oviraptorosaur. Oviraptorosaurs were a group of toothless theropod dinosaurs who lived during the Cretaceous period in Asia and North America.

This fossil from Ganzhou, in the Jiangxi Province of southern China, was hidden in storage for 15 years until the curator of the Yingliang Stone Nature History Museum, Kecheng Niu, discovered it in 2015. When he saw some bones on the broken section of an egg, he arranged for fossil preparation – a process which involves removing the rocky matrix surrounding the bones and cleaning the fossil so it can be studied. This revealed the embryo’s full skeleton.

Recognising the scientific significance of this fossil, the museum invited a team of international palaeontologists (of which I was one) to examine it in depth. We report on what we’ve learnt about the embryo, now named “Baby Yingliang”, in a new paper published in the journal iScience.

The oviraptorosaur embryo, which is 27 centimetres long, lies in a posture unlike what we’ve seen in other dinosaur embryos. Its back is curled along the blunt pole of the egg, while its feet are on each side of its head. This posture is reminiscent of a close-to-hatching modern bird embryo.

This “tucking” is a behaviour that’s controlled by the central nervous system and is critical for hatching success in birds. A position where the head is under the right wing, and the body curled, is suggested to help stabilise and direct the head when a bird is cracking the eggshell with its beak on hatching day. If a bird fails to attain this position, it’s more likely to die due to failure to hatch.

The posture of Baby Yingliang appears similar to a roughly 17-day-old “pre-tucking” chicken embryo. Ultimately a chicken embryo will achieve a tucking posture on the 20th day of development in preparation for hatching on day 21.

Interestingly, we also noticed similarity in the posture of a previously reported oviraptorosaur embryo and a roughly 18-day-old chicken embryo, which is in the first stage of tucking. These observations suggest that oviraptorosaurs may have exhibited similar pre-hatching behaviours to modern birds.

Tucking behaviour is often considered unique to birds. But through detailed comparisons of the embryonic postures of oviraptorosaurs, including the new Baby Yingliang, as well as other dinosaurs and birds, we propose that tucking may have first evolved among theropod dinosaurs – the ancestors of birds – tens or hundreds of million years ago.

This would add to the body of evidence indicating that many characteristics of modern birds evolved in their dinosaurian ancestors.

Pre-hatching behaviour of dinosaurs is a topic rarely explored by palaeontologists, mainly because of the scarcity of well-preserved, articulated embryo skeletons. The fortunate discoveries of Baby Yingliang and other closely-related embryos have allowed us, for the first time, to make a hypothesis on how baby oviraptorosaurs could have behaved before hatching.

And this is just the beginning. We believe more comprehensive comparisons of Baby Yingliang with the embryos of modern birds and crocodiles (the closest living relatives of dinosaurs), accompanied by new fossil evidence, will further build our understanding of the early development of dinosaurs.

Fion Waisum Ma does not work for, consult, own shares in or receive funding from any company or organisation that would benefit from this article, and has disclosed no relevant affiliations beyond their academic appointment.

2021-12-21
Previous Post: The bizarre Covid ‘symptom’ that strikes in the middle of the night
Next Post: It could take 12 hours of walking to burn off your Christmas dinner