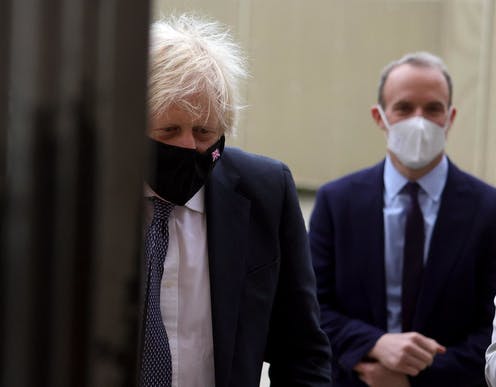 The UK government is pursuing multiple legal reforms designed to rebalance “the relationship between the government, parliament and the courts” – a commitment made in the Conservative party’s 2019 election manifesto. Many of these reforms will affect how people can hold the state accountable, potentially undermining independent scrutiny and weakening the role of the courts in holding the government to account.

Among them is a review of the 1998 Human Rights Act – the law that allows people to enforce certain human rights in British courts – and proposed changes to judicial review – a process by which people can ensure that the government obeys the law.

We were given a further insight into the government’s thinking about how it might continue to “rebalance” its relationship with the judges, with details of the proposals emerging in the press. This includes a possible “interpretation bill”, which would be a yearly act of parliament by which the government would ask MPs to overturn court decisions that the government does not like.

Alongside a growing number of voices, we argue that this is a bad idea. Even if this specific policy is not adopted, these arguments are relevant to any proposal that makes overturning court decisions routine.

Problems with the government proposals

Principally, it is difficult to see what problem this is trying to solve. Parliament is sovereign and can already overturn any court decision, from a small claims case all the way to the UK Supreme Court. This proposal, then, will give parliament zero additional powers beyond those which it already has. At most, it would give parliamentarians a regular block of time to legislate about cases the government dislikes. But it is questionable whether such a regular event is necessary and it could descend into a farcical pantomime of “find judgments to disagree with to justify this exercise”, rather than a serious focus on judgments that raise genuine, principled or pragmatic concerns.

Also, while parliament can already overturn cases, doing so is by no means routine. This proposal would make the irregular regular. It would make the non-routine routine. It would remove the political heat from overturning judicial decisions. Given that the idea is apparently rooted in government frustration with losing important judicial reviews, the proposal would mark a significant indicator of the diminishing status of the rule of law in British democracy.

There are also several important pragmatic concerns. If a carefully reasoned decision of a senior court is to be overturned, this should only be after parliament has fully considered the case and its real-world implications, especially for MPs’ constituents. MPs will need to examine how overturning this case could, for example, make it more difficult for them to challenge an unlawful benefit sanction, a discriminatory stop and search or incorrect decisions about a child with special educational needs. These matters deserve careful attention. It is difficult to see how parliament could perform this assessment on multiple cases at once as part of a general annual exercise.

Being more reflective about individual cases allows time for consultations, so that the government can consider the views of experts in that area of law, and more importantly, people disadvantaged by overturning the decision. This should include impact assessments to consider the consequences for less powerful, underrepresented groups like the disabled, women and racial and religious minorities.

The consequences of overturning the case for the broader constitutional system must also be examined. Would it, for example, promote or undermine government accountability, fair procedures and government obedience to the law?

It is not good law-making to overturn important judgments as part of a generic package when the consequences for ordinary people could be so great.

Further serious problems would arise if the interpretation bill consistently operated retrospectively. This is when the new interpretation would apply not just to future cases but to all past cases as well. People and public bodies plan their budgets, allocate their resources and make their decisions based on the law as it stands. Abolishing the previous understanding of the law all at once could generate legal uncertainty, undermine confidence in the law and damage people’s expectations about what they were entitled to.

Worse, claimants may not even bother to bring some cases for fear that victories would simply be overturned retrospectively. There would be no reason to waste the time, resources and effort. Government accountability could be undermined if people were dissuaded from bringing cases on this basis. Even the apparent support for these proposals at senior ministerial levels may send a message and create a chilling effect. Again, this is legal. But it is not the right course of action. Convenience for the government is not the same thing as the public interest.

At best, the proposal to allow parliament to routinely overturn judicial decisions would be poor legislative practice unconducive to thoughtful law-making. At worst, it would be a significant nudge of the constitution in the government’s favour and away from independent judicial scrutiny. It could threaten government accountability and the rule of law and damage the status of the UK as a model of liberal democracy.

Lee Marsons is a Research Fellow at the Public Law Project, a national legal charity focused on constitutional law and judicial review.

Maurice Sunkin has received funding from the ESRC and from the Nuffield Foundation to support his research on judicial review.

Theodore Konstadinides does not work for, consult, own shares in or receive funding from any company or organisation that would benefit from this article, and has disclosed no relevant affiliations beyond their academic appointment.

2021-12-09
Previous Post: Barca fans call for Lenglet to be axed after laughing with Lewandowski after KO
Next Post: HSE upgrading vaccine booking system in wake of missed appointments