Jamie Barton/Jake Heggie at Barbican: a programme designed to delight 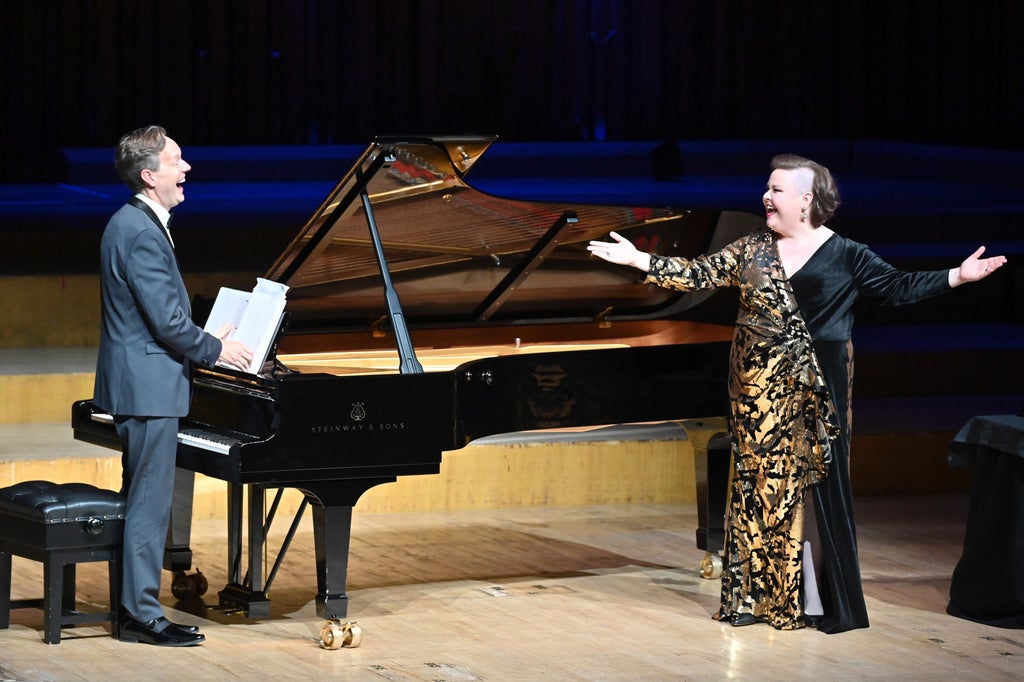 What I miss the most” provided not only the title of Jake Heggie’s new song cycle, given its UK premiere at this Barbican concert, but also the theme of the recital by fellow-American mezzo-soprano Jamie Barton with Heggie at the piano. As the two performers made clear in their upbeat, audience-friendly introductions, what they have longed for most over the past Covid-ravaged couple of years is the experience of live music. The response of the audience to this unconventional programme and its high-octane presentation suggested that it is a feeling widely shared.

Barton and Heggie asked thirty of their friends to put into words what they had most missed. Five selected responses, from soprano Joyce DiDonato, actress and singer Patti LuPone, Sister Helen Prejean (the death penalty abolitionist whose book formed the basis of Heggie’s opera Dead Man Walking), Ruth Bader Ginsburg (the late, progressive Supreme Court judge) and pianist and conductor Kathy Kelly, formed the texts of the cycle. With the exception of DiDonato’s thoughtful lines, the texts are generally on the level of everyday tweets rather than profound poetic utterance. Yet both Heggie’s imaginative settings and Barton’s sincere delivery of them managed to transform banality into something deeply felt.

Heggie’s Of Gods and Cats, a pair of humorous songs in cabaret style, followed, and the second half of the programme concluded with his Iconic Legacies, a group of songs inspired by significant objects associated with First Ladies (culminating in the Muppets and Barbara Bush), all touching on issues of the personal and political.

The encore, Somewhere Over the Rainbow, neatly encapsulated so much of the recital, and not only in its theme of hope and aspiration. Heggie’s harmonies never seem far away from Harold Arlen’s and who could forget the rainbow flag waved so boisterously by Barton in Rule, Britannia at the Last Night of the Proms in 2019?

Barton has become a formidable champion too of works by women and marginalised communities and it was good to hear, in the first half, four attractive songs by the African-American composer Florence Price, especially the haunting Night, the inspiration of a composer as much in love with the sound of the female voice as Richard Strauss, himself echoed in this song.

If the rendering of Purcell’s Music for a While and three songs by Schubert signalled an operatic singer unafraid to unleash her powerful and magnificent instrument on music ideally requiring a more intimate focus, a surprising thing happened for the following Brahms set. As Barton reminded us, that composer’s Unbewegte Laue Luft (Motionless Mild Air) helped her to win the Cardiff Singer of the World contest in 2013. In those days, before her big operatic successes, lieder were central to her art and here she miraculously turned back the clock to recapture that skill. Her singing of these three songs was by no means entirely innocent of grandiloquence, but it was by any reckoning superb – for this listener the highlight of the evening.

2021-12-07
Previous Post: EU solidarity with Poland on migration: a violent response to an imagined threat
Next Post: Yazidi genocide: landmark guilty verdict for IS jihadi could transform how atrocities are brought to justice