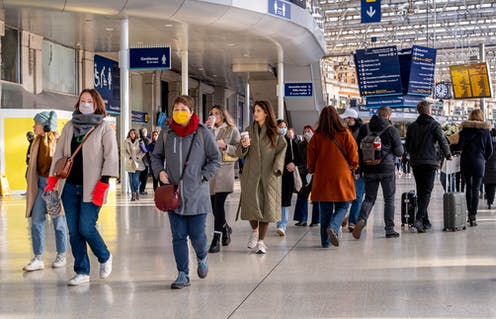 There are fears that the new omicron variant of the coronavirus could be the most transmissible form of the virus yet, so infection control measures are being tightened – face coverings, for example, are now mandatory again in England on public transport and in shops.

When legally enforced COVID restrictions came to an end in July, the onus was put on the public to decide when it was appropriate to wear a face mask. Increasingly, people decided to go mask free. Now, after more than four months of masks not being compulsory in most public spaces, getting people to wear them again could be a battle.

Research shows that compliance with COVID guidelines has fluctuated over time – so there’s no guarantee that reintroducing certain measures will generate levels of compliance seen before. There’s also evidence that people in high-income, individualistic nations tend to be the most nonconformist when it comes to such measures. Inherently, England may be more resistant to the return of masks than many other countries.

The fact that figures of authority have set a poor example could also harm compliance. The British prime minister Boris Johnson recently visited a hospital and didn’t wear a mask, while mask wearing was low among Conservatives in parliament during the autumn. Former prime ministerial advisor Dominic Cummings breaking lockdown rules in 2020 still casts a long shadow too.

We know that when leaders demonstrate behaviours, the public are likely to follow their example. During the pandemic, it’s also been shown that higher trust in government leads to greater adoption of measures to control COVID. So setting a bad example could do the opposite, driving down trust and lowering willingness to comply with COVID rules.

Consistency may be another thorn in the government’s side. Making mask wearing compulsory only on public transport and inside shops is a half-measure, the rationale for which the general public will likely question. By not making masks mandatory across all indoor spaces, people may not get on board. It runs the risk of becoming yet another example of “dither and delay”.

Indeed, emerging research (still awaiting review by other scientists) suggests people may be deterred from following rules that are perceived as inconsistent. When it comes to pandemic health messaging, consistency is key.

There also needs to be clearer communication of the benefits of masks. Mask wearing reduces the spread of COVID. Some people still aren’t convinced of this, but studies show that giving people more evidence on the matter is likely to change how they think and act.

Are we just fed up?

The idea that people won’t follow COVID rules because they’re fed up with them is a popular one in the media, but it isn’t one that the government needs to worry about too much. In research we carried out on nonadherence to COVID rules (which is currently being prepared for publication, and so is yet to be reviewed by other scientists), dissatisfaction didn’t seem to be a major problem.

Rather, we found that breaking COVID rules was more often about something else entirely: the enjoyment of rebellion. For some, there’s a little thrill that comes with being playfully oppositional. Defying COVID restrictions for these people produces a pleasurable feeling that reinforces their rule-breaking behaviour, making them more likely to repeat it.

In our study – which we conducted in Ontario, Canada – 666 adults responded online to a number of questions about health beliefs, rebelliousness, demographic factors and compliance with three COVID-related public health behaviours: mask wearing, hand washing and social distancing.

Our results suggest that noncompliance across all three preventative behaviours had more to do with someone’s social identity as a “nonconformer” than being truly disaffected by the rules. Specifically, we found that participants’ rebelliousness and noncompliance wasn’t born out of frustration. Rather, it was a proactive, excitement-seeking, breaking-rules-in-the-moment-for-fun type of rebelliousness that emerged as a significant predictor of nonconformity.

These findings, which are similar to those of earlier research, are important because they could have implications for the way in which public health messages need to be constructed. Evidence suggests that about one in ten people report not complying or not wanting to comply with COVID requirements. That’s a lot of people when scaled up to a country’s population. Messages that seek to drive good health behaviour need to target this subgroup.

How to reach COVID rebels

Sometimes, with those who feel very rebellious, messages that involve reverse psychology can be effective: telling people to do the opposite of what they are supposed to can shine a light on the absurdity of their nonconformity. Being humorous can also appeal to those of an oppositional disposition.

Messages or tactics that nudge COVID rebels towards compliance should be used. With masks, for example, having playful nonconformist imagery on face coverings might encourage the noncompliant person to wear them, since such masks clearly signal the wearer’s rebellious social identity, but without putting themselves or others at risk.

These sorts of nonconformist masks are already available, and it’s also possible for people to design their own masks online. There could, though, be more of a push towards getting people to consider personalised masks. Official guidance in the UK tends to promote wearing plain, surgical masks over other types and designs.

Responding to some people’s rebelliousness is, we think, an under-explored way of getting more people to adhere to COVID measures that can protect us all. But it can at best only be part of the solution – rebelliousness isn’t the only reason behind noncompliance. People may not believe in the effectiveness of the rules, or may mistrust the motives of the government that set them, or not see themselves as having a responsibility to wider society.

To try to fix these issues, the government should look as well at the earlier problems we discussed. Explaining the benefits of mask wearing better, having those in power set a better example, and introducing better rules that are consistent and make sense should all also be considered.

2021-12-06
Previous Post: Curious Kids: why can’t we put a space station on the Moon?
Next Post: Mental health and terrorism: more people flagged to authorities have ‘mixed, unstable, unclear’ views than Islamist ideologies