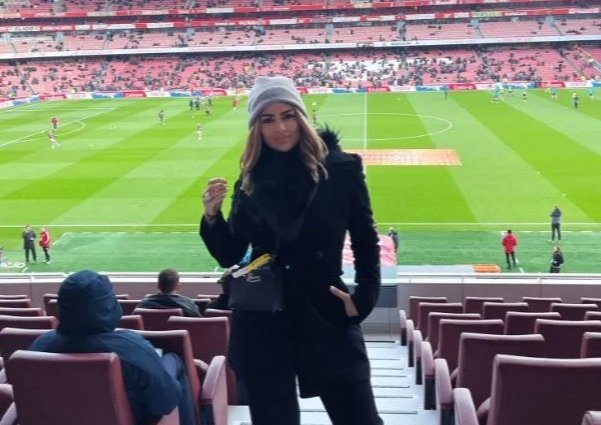 KIM KARDASHIAN’S friend Carla DiBello celebrated Newcastle’s first win of the season after playing her part in the Saudi takeover.

The Magpies earned a 1-0 victory against Burnley on Saturday.

Callum Wilson grabbed the only goal of the game, firing home emphatically after Nick Pope dropped the ball.

The businesswoman and TV producer, 37, posted Newcastle’s video of Eddie Howe punching the air at full-time on her own story – to nearly 600,000 followers.

That was the Toon’s maiden three points of the campaign – and therefore the first win since the club’s £300million purchase from Mike Ashley.

Last week, they suffered a 2-0 defeat away at Arsenal.

And DiBello was in the stands at the Emirates to take in the action, sitting behind Amanda Staveley and her husband Mehrdad Ghodoussi.

As reported by the Mail on Sunday, DiBello introduced Staveley – of PCP Capital Partners – to the Saudi Public Investment Fund and operates in public relations for both.

Together with the billionaire Reuben brothers David and Simon, the consortium bought the North-East club in October – with the Saudis taking an 80 per cent stake.

A source told the Mail: “Carla DiBello was involved way back, and was key in making the introduction between PIF and PCP.

“She has lived in Dubai for eight years, and is good friends with Amanda’s husband.

“Her long track record of working with Saudi companies, and PIF, is well known.

“But Carla is not employed by the club, or PIF, or the PCP and has nothing to do with running the club.”

Her links to Saudi Arabia date back 20 years to a friendship formed with Esam Ghazzawi’s daughter in Sarasota, Florida – her dad being the money manager for the Saudi royal family at the time.

The Mail report adds that the Ghazzawis moved away from Florida shortly before the 9/11 attacks with FBI documents later showing that two of the terrorists had spent time at a property owned by Ghazzawi Sr in Sarasota, while taking flying lessons.

DiBello worked with Kim K on ‘Keeping Up With The Kardashians’ and was a guest at her wedding with Kanye West in 2014.

This weekend she was not able to be at St James’ Park – because she is in Jeddah for the Formula One Grand Prix weekend.

2021-12-05
Previous Post: The Best Eco-Cleaning Products Tried And Tested
Next Post: Get ready for the Russell ‘Rustler!’