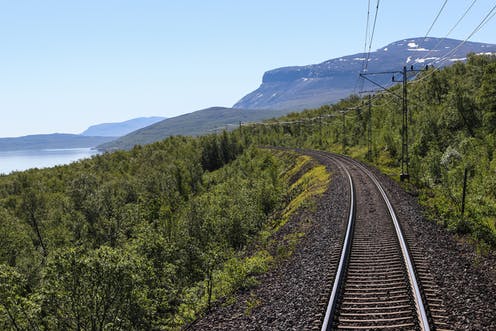 Air travel is often presented as desirable, despite its high environmental cost. In Sweden, however, a movement advocating avoiding flying has gained influence since 2016, and has started to change the way travel is portrayed in the Swedish media.

Going on holiday is the most common reason for flying globally. In Sweden, 80% of national flight emissions are caused by leisure and holiday travel. Our recent research studied how media articles, advertisements, and images from popular magazines and newspapers reflect shifting ideas and assumptions about holidays by plane in Swedish society.

To study changing views and representations of holiday air travel, we analysed these media articles and images from 1950 to 2019. We looked for common themes (like the purpose of holidays), and identified how these themes were represented over time. For example, we found that the idea of a holiday as restorative has been consistent over time, but the way to achieve that has changed in some travel media from flying to find sunshine towards searching out experiences closer to home.

These shifts are illustrated by the images below. For example, the SAS advert below shows how flying was seen as an important and appreciated part of the holiday experience in the 1950s, with the plane trip seen as comfortable and luxurious.

In the 1990s, holiday flying tended to be represented as a normal part of middle-class Swedish life and as an escape from everyday pressures, as illustrated in the advert below from holiday company TUI.

While positive representations of flying are still common, from 2016 the Swedish public debate shifted to highlight alternative ways of travel, as illustrated in the cover image of train travel in the Swedish travel magazine Vagabond above. Newspaper articles started to discuss the idea of taking responsibility for the climate cost of flying and challenging the idea of aviation as socially desirable.

The media started to reflect a shift in attitudes about flying to holiday destinations articulated by some sections of society. Coverage of this new phase also reflects increasing concern for the importance of acting with urgency to tackle the climate crisis; living according to one’s values; taking moral responsibility for climate harm; and enjoying climate-friendly travelling.

Discussions about avoiding flying became far more high profile from 2016 when celebrities, journalists, academics, and campaigners started to publicly pledge to stop flying in the Swedish news media. One of the first was the famous opera singer Malena Ernman (who is also activist Greta Thunberg’s mother). Others followed up their social media pledges with the hashtag #JagStannarPåMarken (#IStayOnTheGround).

These pledges marked the beginning of an intensified public debate in Sweden about the desirability and necessity of air travel, which spread internationally over the following years.

Some commentators mistakenly believe this trend is driven by “flight shame”. But the shift we identified in Swedish travel media frames living flight-free as positive, emphasising all the environmental benefits, and feeling good about staying on the ground.

While flying is still widely presented as desirable, changes in some media coverage show the influence of the flight-free movement and illustrate that different perspectives of what constitutes a good life under climate change are gaining some influence.