HS2: transport expert on the huge gaps in the government’s new plan 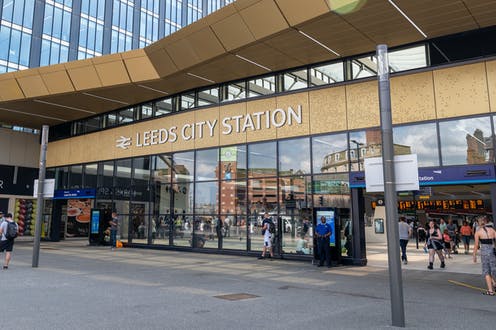 In 2009, the company HS2 was set up to provide a new high-speed rail line in England. It was planned to be built in two stages. Phase one would go from London to Birmingham; this is already under construction. Phase two was intended to connect Birmingham to Manchester (by a western line) and to Leeds (by an eastern line). Both of these would then link into existing lines to Newcastle and Scotland.

As the transport secretary Grant Shapps has now confirmed, however, the eastern line will no longer be built in full. Instead, a shorter new line is planned, with existing tracks upgraded.

The government’s integrated rail plan comes with a hefty £96-billion price tag. So this does represent significant investment.

It nonetheless leaves Yorkshire without a high-speed connection to the rest of the country. It also fails to solve the ongoing problems of limited capacity for passengers and for freight on the east coast main line to London, although how severe that problem will now be depends on the extent to which rail traffic recovers from COVID.

Capital costs associated with HS2 have increased substantially since the 2000s. The latest review by HS2 Ltd put the figure at £81-88 billion, with experts suggesting the final spend could turn out to be up to 20% higher. Passenger demand, meanwhile, is still running well below pre-COVID levels. Thus the need for economies on the original plan is understandable. However, this plan presents little evidence the new proposals offer the best value for money.

You would normally expect an integrated rail plan to describe the technical studies behind the decisions taken. You would want to see evidence for traffic volumes and benefits for the local economy. The government’s new plan contains no such material.

A 2020 report for the government concluded that funding was unlikely to be available to meet all the aspirations of the north of England. It stated that it was more urgent, for the economy of the region, to upgrade regional services, such as those between Leeds and Manchester, than to improve links to London. It thus proposed to do what the government has decided to do, which is to scrap the full eastern leg of HS2, having it stop at East Midlands Parkway instead.
The problem is that this 2020 assessment was based on a controversial approach to forecasting impacts on the economy developed by the National Infrastrucure Commission, which has not been accepted as part of the official government approach to transport appraisal. It also disregarded any benefits resulting outside the Midlands and the north – so benefits to the south east are totally ignored. Obviously this ignores many of the benefits of HS2, while fully including benefits of a new line between Leeds and Manchester.

Elsewhere, while promising further study of how to get HS2 trains into Leeds, the government’s plan is to upgrade the east coast mainline (provided that further study decides that the ratio of benefits to costs is adequate) in order to allow a limited acceleration of services including Leeds-London.

Such an upgrade was also previously considered. While that report determined that upgrading was the cheaper option than going ahead with HS2, it said it would be far less beneficial and, crucially, it would involve major disruption to existing services with part of the line being closed every weekend for many years.

An important part of the debate over which new lines to build and which to simply upgrade has been that of the wider economic benefits any rail developments will bring. The problem is that this impact is very uncertain.

There is wide acceptance that there would be significant agglomeration benefits from better linking the labour markets of Leeds and Manchester. But there are also potential wider economic benefits from building better links to London and Birmingham. The new plan offers no evidence for the decisions the government has made on these issues.

While new-build lines plus upgrading will permit a comparable Leeds-Manchester journey time (33 minutes) to that which an entirely new line would have permitted (29 minutes), it’s not that straightforward. The new plan disregards Bradford, a city with very poor rail connections for its size. At the same time, it was never clear that the expense of a completely new line via Manchester would have been justified.

For Leeds, journey times are set to be significantly higher than what would have been possible under the original full HS2 plan for the eastern leg. Leeds to Birmingham will now take 89 minutes (and not 49 minutes) and Leeds to London, 113 minutes (as opposed to 81 minutes).

Crucially, as people in the north-east have been quick to point out, this plan greatly advantages Manchester over Leeds as a location for the northern headquarters of organisations: journey times are markedly shorter across the board. But, even here, the scale of any impact this will have is unclear because no evidence is proffered.

Chris Nash was formerly a member of the advisor group on the economic impacts of HS2 set up by HS2 Ltd.

2021-11-30
Previous Post: We don’t know much about Omicron but we do about jabs – they WORK
Next Post: Omicron and market sell-off: don’t be surprised if there’s more turbulence to come