COVID: will the UK vaccinate children under 12? 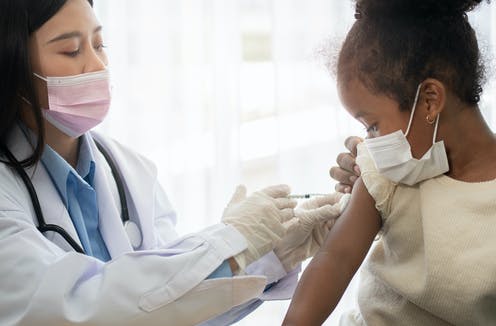 Some countries, such as the US and Israel, are now offering COVID vaccines to all children aged five and over. It’s a sign of how well vaccine rollout has gone in these places, but also that the pandemic is still raging on. Governments are going further and further to try to stay on top of the virus.

Could the UK follow suit? One group that will help decide is the Joint Committee on Vaccinations and Immunisations (JCVI), the government’s adviser on vaccines. It has “consistently maintained” that when considering COVID vaccines for children, the main focus should be “the benefits to children themselves, balanced against any potential harms to them from vaccination”, rather than any other factors.

When the JCVI weighed up vaccinating the next youngest age group – 12-to-15-year-olds – it found that the benefits were only “marginally greater than the potential known harms”. So marginal, in fact, that it advised against offering vaccines to this group.

So for the JCVI to give the green light to vaccinating over-fives, the health benefits will need to be more compelling than for 12-to-15-year-olds. But what does the evidence say?

A trial of the Pfizer vaccine in children aged five to 11 found it to be both safe and effective. In particular, no cases of heart inflammation (myocarditis) were identified. This has been a rare but noted side-effect of the mRNA-based COVID vaccines in younger people.

However, fewer than 2,000 children were vaccinated in the trial, which is insufficient to accurately identify the risk of such a rare complication. More broadly, there doesn’t yet appear to be sufficient data to estimate the risk of myocarditis in this age group after they get vaccinated. This makes calculating overall risk difficult.

Then there’s the question of benefits. This begins with asking whether the risk from the thing you’re concerned about – in this case COVID – is small enough to forgo interventions to try to control it.

There’s no general consensus about what size a risk has to be to be worth responding to, though a lifetime risk of death of less than one in 100,000 is often considered “tolerable” and less than one in a million “acceptable”.

Researchers have reviewed all deaths in under-18s in England where the person tested positive for COVID shortly beforehand. Of the 61 positive young people who died, COVID contributed to death in only 41% of cases – and of this group, roughly three-quarters were children with chronic or life-limiting illnesses.

Among otherwise healthy children aged five to nine, COVID accounted for substantially less than one death per million each year. This could be deemed a tolerable risk, even though this elevated risk of death may last another year or two as the pandemic continues.

But what about ill health?

Healthy children who get COVID are also much less likely to be hospitalised than older people. Severe disease in the young is mainly seen in children with pre-existing illnesses. The risk of acute ill health for children also leans towards being acceptable.

However, one concern over the JCVI’s decision not to recommend vaccination for 12-to-15-year-olds was whether enough consideration had been given to long COVID. This would be a concern for under-12s, too.

While the JCVI noted that there did appear to be cases of long COVID among 12-to-15-year-olds, it concluded that the “signal” was small and that studies of the issue “had major subjective bias”. Indeed, recall bias and sampling bias are two common issues that can overestimate the prevalence of symptoms (and so the risk of long COVID) in studies like these that are based on self-reporting.

Better study design can reduce some of this bias. For instance, the Office for National Statistics ran a study that compared the prevalence of long COVID symptoms in people who had and had not had COVID. For the children aged two to 11, rates of these symptoms were no different across the two groups. So in this age group, much of what’s reported as long COVID may just be typical illness.

It’s also worth noting that many of the studies described so far involved children with little exposure to the virus. But in September 2021, England’s chief medical officer estimated that about 50% of British children had already caught the virus. That proportion will already be somewhat greater. The benefits of vaccination will be lower in young children if the majority are already immune.

JCVI doesn’t have the final say

Considering all the above, on health grounds the case for vaccinating British primary school children seems no stronger than the case for vaccinating 12-to-15-year-olds. Because these younger children are at even less risk of severe disease than teenagers, it’s unlikely the JCVI will recommend COVID vaccines for them (though it should offer vaccines to young children with prior health conditions that put them at greater risk).

Ultimately, though, the JCVI only advises. On teenagers, the UK’s chief medical officers didn’t take the committee’s advice and rolled vaccines out to them. Wider issues caused by leaving cases unchecked in this age group, such as disruption to education, informed that decision.

At the moment, around 40,000 new infections are being recorded in Britain each day, mainly in children too young to be vaccinated. Young people may now be driving the pandemic in the UK. It’s also feared that the new omicron variant may raise transmission, particularly among the unvaccinated.

So there are grounds on which vaccines could be rolled out to pre-adolescents – but a decision to do so would probably be based on a very broad assessment of the benefits that goes beyond just looking at young people’s health.

Paul Hunter consults for the World Health Organization (WHO). He receives funding from the UK National Institute for Health Research, the WHO and the European Regional Development Fund.

2021-11-30
Previous Post: Kasabian star Serge Pizzorno joins Banksy in art show
Next Post: Get into the ‘Zone’ with Graham!