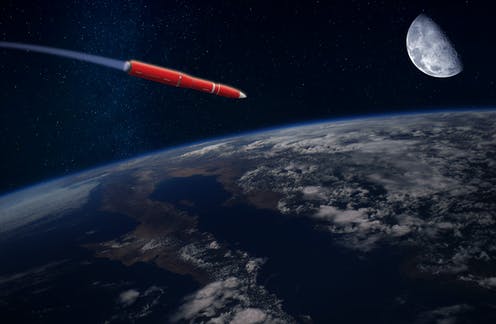 According to media reports from Washington, the Biden administration wants to engage China in talks on arms control and non-proliferation. The US president, Joe Biden, and Chinese leader, Xi Jinping discussed the issue during their recent virtual summit.

The issue has not previously been high on the agenda in talks between the two countries, but China’s recent test of a hypersonic missile that can attack multiple targets in flight have lent a new urgency to US defence thinking.

At the same time, Russia’s recent test of a Tsirkon hypersonic cruise missile from a submarine in the north of the country has focused US military planners on the prospect of America falling behind its two superpower rivals in what some are seeing as a new arms race.

Hypersonic missiles are often defined as missiles launched by a rocket into Earth’s upper atmosphere at speeds of Mach 5 and above (five times the speed of sound or 6,174 kilometers (3,836 miles) per hour), before manoeuvring towards a target. Several countries already have intercontinental ballistic missiles (ICBMs) that travel just as fast – or even faster – but these cannot change trajectory once launched. The new generation of hypersonic missiles are equipped with glide vehicles that approach their targets at high speed in the final phase of flight.

Russian president Vladimir Putin announced as long ago as 2007 that his country had developed a completely new technology for ballistic missiles, which he referred to as “hypersonic missiles”. And from 2015, Russia has been testing new glide vehicles, called Avantgard, that are mounted on intercontinental missiles and can reach speeds of 7,000 km/h when approaching their targets. Putin said this was a means to counter US missile defence systems, developed after the withdrawal by the Bush administration from the Anti-Ballistic Missile Treaty in 2001.

The latest Chinese tests involved not only a hypersonic glide vehicle, but possibly a “fractional orbital bombardment system” that enables the release of various payloads in flight prior to entering the atmosphere, enabling multiple targets to be reached that can be very far apart from each other.

If successful, this would give China a new capability to approach the US mainland from the south. That matters, because American early-warning systems and missiles defences are primarily oriented towards tracking ballistic missiles entering the atmosphere from a northerly direction, based on the expected path of Russian ICBMs.

The precise technology employed by this system is not yet fully understood. General Mark Milley, the chairman of the US joint chiefs of staff referred to the test as “close to a Sputnik moment” (a reference to the first earth satellite launched by the Soviet Union in 1957). China has denied carrying out such a test.

The strategic significance of hypersonic weapons technology has been exaggerated. Hypersonic missiles do not constitute a “game changer” in offensive military capabilities. The nuclear strike forces of the United States, Russia and China already rely on intercontinental ballistic missiles which travel at 20 times the speed of sound. The difference now is that shorter-range missiles can also achieve hypersonic speeds inside the Earth’s atmosphere.

The key issue is that US defence capability is not designed to deal with a substantial strike from Russia or China. It is primarily built to counter small salvos of missile launches from “rogue states” such as North Korea and Iran. The US actually relies on deterrence, based on a robust offensive strike capability as a deterrent to prevent a nuclear attack from either Russia and China.

So, while the new technologies being developed by Russia and China do not change the strategic balance as such – and are not a significant threat in and of themselves – they constitute an alarming signal about the growing arms competition between the three powers. Both the development of new technologies and increasing the quantity of available weapons are potential future threats.

While all eyes are on these new long-range hypersonic missiles, the real arms race is more likely to be in regional conventional weapons systems. China is increasingly deploying short- and medium-range ballistic missiles to counter US naval carrier groups in the disputed waters of the South China Sea and around Japan and Korea.

In response, Washington recently signed the AUKUS treaty with Australia and the United Kingdom. This is an agreement to deploy more ships and increase submarine patrols in the region, and has involved the US pledging to help Australia develop its own submarine capability.

The patrols in the South China Sea are the likeliest flashpoint between China and the US and its allies. In the aftermath of the Trump adminmistration’s withdrawal from the INF Treaty, the US could consider deploying new medium-range missiles itself. The INF treaty would not have allowed medium-range missiles to be based in Guam, Japan or South Korea to counter China’s ballistic missiles deployed against the US in the coastal regions. Now the US is free to deploy in the region.

But to mitigate the build-up of tensions, a more wide-ranging and comprehensive approach – not only to arms control, but to the wider issues of security between the US, Russia and China – is becoming more urgent.

2021-11-29
Previous Post: Young children all find politics engaging but by 15 this has changed – new research shows why
Next Post: Women in sport are winning the fight for equal pay – slowly