Cyberflashing could be criminalised: here’s how a change in the law would help victims 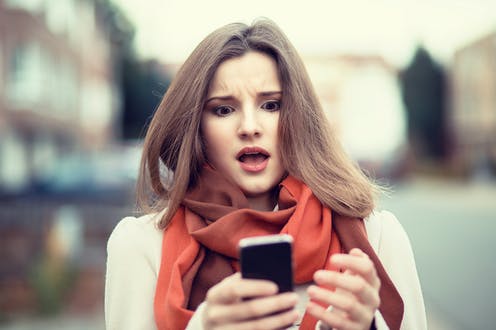 “Cyberflashing” – the unsolicited sending of photos or videos of genitals – may soon be a crime in England and Wales.

Surveys have found that nearly half of young adult women have been sent unwanted, graphic images by men. Receiving so-called dick pics is especially common among women who use dating apps. In some high-profile cases, people have even been AirDropped images by the hundreds while travelling on public transport. In 2019, British Transport Police found that 88% of those targeted were women.

Cyberflashing has clear parallels with indecent exposure, which is already a sexual offence carrying a maximum two-year custodial sentence. But it is not clear whether this law applies to digital forms of exposure.

Campaigners, MPs and the dating app Bumble are all calling for the law to change to close this loophole. Politicians are now discussing how cyberflashing may be included in the forthcoming Online Safety bill.

Criminalising cyberflashing specifically as a sexual offence would bring a host of legal benefits to victims and could help police identify perpetrators at risk of causing further sexual harm. Hopefully, it may also deter would-be cyberflashing offenders from hitting “send”.

Legal recognition would provide those who suffer harm as a result of cyberflashing a means of redress. While some women try to “laugh off” an unwanted photo of a penis, for others it can be frightening, distressing or humiliating.

At its core, the non-consensual nature of this conduct makes it violating and intrusive, as women’s testimonies stress. Likewise, a Kinsey Institute study found 70% of women who responded to a survey reported negative reactions to unwanted penis images, most commonly feeling “grossed out” and “violated”.

Cyberflashing may also be experienced as harassing. For example, consider how a woman may feel when a man who has been messaging persistently – despite her ignoring him – sends an image of an erect penis. This could be seen as confusing or even threatening.

This scenario happened to a woman I spoke to in a research interview. She described the incident as “shocking” and that she became “scared by him”. Women may fear a man’s intrusive behaviour will escalate to violence. This brings us to another argument for criminalising cyberflashing.

After it was revealed former Met Police officer Wayne Couzens had repeatedly exposed himself in person before he raped and murdered Sarah Everard, fears that indecent exposure acts as a gateway to other sex crimes have been heightened.

In Scotland, where cyberflashing has been classed as a sexual offence for over a decade, police have seen cases of offenders brought to justice for serious sexual crimes after coming onto their radar through a cyberflashing report.

One of the much hoped-for effects of a new cyberflashing law is that it will deter would-be perpetrators by clearly signalling the behaviour as criminal. As Whitney Wolfe Herd, Bumble’s founder and chief executive, puts it: “|If flashing won’t fly on the street … it shouldn’t be tolerated in your inbox.”

The existence of legal sanctions will help signal that cyberflashing is morally wrong and should not be accepted by society as just another unsavoury online behaviour.

In a welcome step, the Law Commission has recommended amending Section 66 under the Sexual Offences Act 2003 to ensure cyberflashing is clearly included in the indecent exposure law. This recognises the nature of the behaviour and its effects.

Their proposal also retains the mental or “fault” element of the original offence: that in sending “an image or video of any person’s genitals” the defendant intends to cause alarm, distress or humiliation. It is here there are some concerns about proving intent. The extent to which a law against cyberflashing acts as an effective deterrent will depend on how enforceable it is.

Some experts consulted in the drafting of this proposed reform argued a focus on malicious motive would put an unreasonably high burden of proof on prosecutors. With cyberflashing, it could be difficult or impossible to demonstrate such intent, given how often this behaviour is normalised and trivialised, for example, as “misguided flirting”.

Fortunately, the Law Commission has added another possible element that could allow for a wider range of cases to be tried and convicted. A defendant may be found guilty if it’s proved they sent a genital image (or video) “for the purpose of obtaining sexual gratification” and were “reckless” as to whether it would cause alarm, distress or humiliation. Proving a sexual motive should be an easier task for prosecutors. The addition of recklessness also sends a clear message: if you cyberflash and cause someone harm, it is not good enough to simply claim you didn’t mean to.

As the government turns its attention to the Online Safety Bill, it is now vital that legislation be passed to criminalise cyberflashing. We can no longer give carte blanche to those so inclined to expose themselves online. It is criminally wrong, and women have had enough.

Laura Thompson does not work for, consult, own shares in or receive funding from any company or organisation that would benefit from this article, and has disclosed no relevant affiliations beyond their academic appointment.