How to dissuade parents from believing in anti-vaxxer conspiracy theories 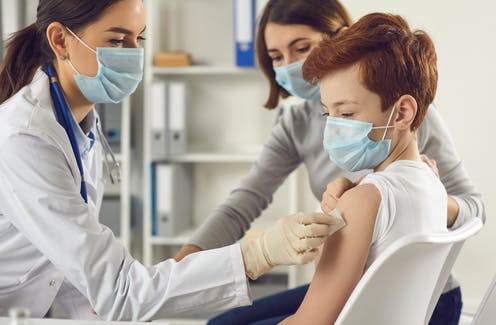 Older people may be more vulnerable to COVID, but in the UK it’s the young that are now driving the pandemic. Last month, school-age children in Britain were 15 times more likely than people over 80 to have the coronavirus.

Leaving young people unvaccinated partly explains why cases have been so high in this group. This is why many countries are now offering COVID jabs to children. In the UK, all 12 to 15-year-olds are being offered a first vaccine dose. Some countries – such as the US and Israel – are offering COVID vaccines to children aged five and over.

Of course, with younger children, it’s their parents that decide whether they get the jab – and vaccine hesitancy can be a problem. In a recent US poll, three in ten parents said they would definitely not vaccinate their child against COVID. Concerns about side-effects or the perceived lower risk of COVID to kids may explain this. However, anti-vaccine conspiracy theories may also be playing a role.

Once COVID vaccines started being developed, it didn’t take long for specific conspiracy theories about them to appear – for instance that they contain microchips or make people infertile. Research has shown that believing in such theories is associated with reduced intentions to receive a COVID vaccine. It’s therefore highly plausible that believing in COVID conspiracies could prevent parents from wanting to vaccinate their children against the coronavirus.

Our research has looked at how to dissuade parents from believing in conspiracy theories that might prevent them from vaccinating their children – which is particularly relevant now that COVID vaccines are being offered to under-16s in many countries.

Past research has shown that people are influenced by the perceived beliefs and behaviours of other people – what are known as “social norms”. But these perceptions are often inaccurate, which can lead to people shaping their behaviour to fit a misperceived norm.

However, we didn’t know whether this was true specifically when it came to conspiracy theories. So as a first step, we explored whether there’s a link between perceived social norms and conspiracy beliefs among British parents.

Knowing this, we then attempted to lower parents’ belief in anti-vaccine conspiracy theories by correcting their overestimation of what other parents think. We did this using the Social Norms Approach, a simple technique that works by correcting misperceptions – for example, by giving people feedback on how they misjudged the actual beliefs and behaviours of others. The aim of this is to recalibrate people’s perceptions, and so change their behaviour so that it aligns with what others actually think and do.

We tested this approach on a sample of British parents of young children. Parents first completed measures of their personal belief in anti-vaccine conspiracy theories and their intentions to vaccinate a fictional child. Next, they estimated to what extent “other UK parents” endorsed the same conspiracy theories and what their intentions to vaccinate would be.

Parents were then allocated to either receive feedback on their beliefs, which would correct any misperceptions of other parents’ conspiracy beliefs, or no feedback. Immediately afterwards, participants were again asked about their anti-vaccine conspiracy beliefs and intentions.

We found that correcting misconceptions reduced parents’ beliefs in anti-vaccine conspiracy theories. It also increased perceptions that other parents would vaccinate their children, which as a knock-on effect increased parents’ own intentions to have a child vaccinated.

A simple step to improve uptake

Our findings are the first to suggest that correcting inaccurate perceptions of what others think could be used to tackle anti-vaccine conspiracy beliefs and so improve vaccine uptake – both among adults themselves and children that they make decisions for.

When talking with people who might be persuaded by anti-vaccine conspiracy theories, a practical step could be to highlight that conspiracy beliefs are not as commonplace as people might think. Showing that it’s far more usual to vaccinate rather than not vaccinate could also be persuasive.

With vaccination levels in children still being quite low in the UK while COVID cases remain high, this simple psychological technique could be an important tool for addressing vaccine hesitancy, and one that many people could easily have a go at trying.

Daniel Jolley has received funding from the British Academy and Not Equal.

Darel Cookson, Rachel Povey, and Robert Dempsey do not work for, consult, own shares in or receive funding from any company or organisation that would benefit from this article, and have disclosed no relevant affiliations beyond their academic appointment.