Sleaze: why Boris Johnson is being reminded of the lurid scandals of 1990s Britain 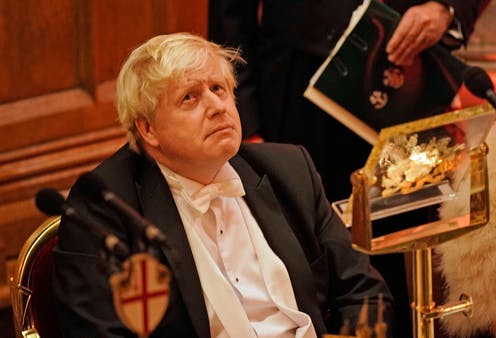 The “Teflon premier” has finally encountered something that may stick: the revival of a word first heard the last time a British Conservative government entered its second decade – but with a twist that’s very much of the age of Boris Johnson.

“Sleaze” is squarely associated with the “short 1990s” – the decade before the Labour election landslide of 1997. That John Major was prime minister for seven years is widely overlooked, perhaps because he so often appeared overwhelmed, from the moment of his great triumph – the 1992 election win that many even within his own party did not believe would happen.

The architect of that fourth successive victory, party chairman Chris Patten, admitted to Major that they had “stretched the elastic” as far as it would go. It soon snapped.

As with Johnson, by the time Major took over, in 1990, the Conservatives had been in power for three parliaments. Both premiers needed a fresh, animating policy brand, thus back to basics, and levelling up as respective election platforms. But risks are great when mischaracterisation is easy: the very phrase “back to basics” – a programme never intended to be about personal morality – was immediately mired in scornful accusations of hypocrisy.

The landmark scandal of the period was “cash for questions”. Plutocrats paid lobbyists to keep MPs on retainer, and newspapers caught MPs in stings, filming them accepting money in return for asking questions of ministers in parliament. Numerous Conservative MPs were implicated, most famously Neil Hamilton. The brown envelope stuffed with cash became a political signifier.

But 1990s sleaze was much wider, and remarkable for how many other, unrelated, cases took place, or were revealed. The “arms to Iraq” scandal saw British engineering firm Matrix Churchill exposed for selling military equipment to Saddam Hussein’s regime, only for its activities to be revealed as government-sanctioned. This occasioned a high-profile, judge-led, potentially government-ending inquiry – and the spectacular downfall and imprisonment of cabinet minister Jonathan Aitken.

Of the greatest interest to a prurient public were MP scandals involving sex. 1994’s front pages alone splashed two former ministers: Steven Norris and his five mistresses, and Alan Clark bedding (separately) a mother and both of her daughters. That neither man was abashed by the revelations added to the sense of a decadent party partying decadently.

Their colleagues Tim Yeo and Gary Waller fathered children out of wedlock; Rod Richards and Robert Hughes resigned over extra-marital affairs, and Piers Merchant was caught with a teenage nightclub hostess. Resigning over a relationship with a young woman more than half his age, was Hartley Booth, lay preacher and father of three.

Even before the agency of social media there was enough titillation to sustain tabloid feeding frenzies for at least a couple of news cycles, abetted by the best endeavours of the publicist Max Clifford, who with fitting symmetry was himself eventually disgraced and imprisoned.

To compound the end-of-days feel, was the nascent Conservative civil war over Europe, which prompted Major into a tactical, and ineffectual, resignation as party leader. His landslide re-election did nothing to affect the popular impression of a prime minister in office but not in power.

Regular by-election disasters – Newbury in 1993, Christchurch in 1993, Eastleigh in 1994, Littleborough and Saddleworth in 1995, Devon West and Torridge in 1995, South East Staffordshire in 1996, Wirral South in 1997 – punctuated the parliament like the beat of a funeral drum.

There was never a political disintegration like it. Bliss it was to be a satirist, and Have I Got News for You became appointment TV (there being no streaming). It was a country beset by calamity; in Labour leader John Smith’s words, one “where the Grand National doesn’t start and hotels fall into the sea”.

So it was that the outcome of the 1997 general election was the most predictable in history. The campaign reflected, often farcically, the five years that had just passed, most iconically the former BBC journalist Martin Bell, in his white suit, slaying Hamilton as if George to the dragon. Across the country Sir James Goldsmith’s new, insurgent, Referendum Party challenged deceitful politicians to take back control. It won no seats but attracted nearly a million votes.

Such are the behaviours of a one-party state, or a rotten borough – or a tribe that has grown used to power. It had happened before, to the Conservatives in the early 1960s, and it would happen again, to Labour (and the entire political class) in the late 2000s with the expenses scandal. But in none of these cases was the prime minister implicated in wrongdoing. Johnson has been referred to the Standards Commissioner more times than any MP in the last three years.

The 1990s was still a time when standards, when authority, was respected. Major did not conjure up the ambiguous formulation “fallen foul” of the rules rather than accepting guilt. Major did not have to be shouted down by the Speaker of the House of Commons. One of Major’s cabinet ministers did not call on the Standards Commissioner to resign.

Sleaze also provides scope. That of the 1990s allowed Tony Blair to appear new and nimble; the expenses scandal provided for David Cameron to be above reproach (though that was to change). 2021 proffers a potentially lucrative brief for Keir Starmer, a former prosecutor of errant MPs.

The 1990s bottled the essence of generalised political scandals – the exploiting of power and patronage, the seductions of bedpost and bank balance – but there could also be tasted the tang of the new politics. The election of 1997 was the first in the UK with populism prominent. The extraordinary scene at his count, as the defeated Mellor was howled down by insurgent party activists, may be seen to have offered a foretaste of politics to come.

Martin Farr does not work for, consult, own shares in or receive funding from any company or organization that would benefit from this article, and has disclosed no relevant affiliations beyond their academic appointment.