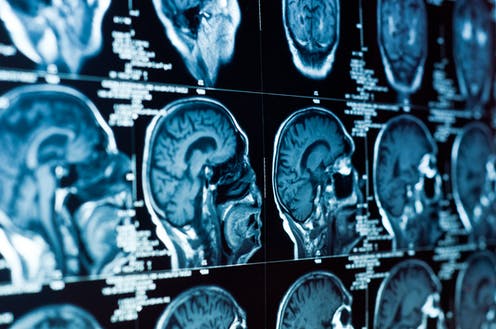 Language has traditionally been considered a complex skill which mobilises brain networks specifically dedicated to linguistic processing. But in recent years, neuroscience research has returned to this idea and offered new insights.

Notably, studies have suggested that areas of the brain which control certain language functions, such as processing the meaning of words, are also involved in the control of fine motor skills.

Syntax, the ability to correctly structure words into a sentence, is one of the most important features of language. While evidence had yet to link syntax skills specifically with motor control in the brain, research published in 2019 revealed a correlation between having good syntactic ability and being skilled at using tools.

With this in mind, our international research team was interested to know whether the use of tools engages parts of the brain similar to those mobilised when we’re thinking about the construction of sentences.

We invited participants (244 across a series of experiments) to perform tests consisting of motor training and syntax exercises in French. Our new findings, published in the journal Science, show that these two skills do engage the same region of the brain. We also found motor training with a tool improves our ability to understand the syntax of complex sentences, and vice versa.

For the motor training, we asked participants to use mechanical pliers to insert small pegs into different holes. In the syntax exercise, participants were shown sentences such as “The scientist who admires the poet writes an article” or similar sentences with more complex syntax like “The scientist whom the poet admires writes an article”. They then had to judge statements such as “The poet admires the scientist” as being true or false.

For the first part of our analysis, we used brain imaging techniques (functional magnetic resonance imaging, or fMRI) to identify the brain networks activated during each task.

We wanted to know more

Once we had ascertained that these two skills use the same brain resources, we wondered, is it possible to train in one to improve the other? Would motor training with the mechanical pliers improve comprehension of complex sentences?

So in the second part of our study, we invited a new sample of participants to complete a syntactic comprehension task before and after a 30-minute motor training with the pliers.

In the syntax task, we found that after motor training, participants performed better with sentences considered more difficult compared to before motor training.

To be confident this improvement wasn’t an effect of having completed the syntax activity earlier, we compared these results with three control groups – one which did not receive any motor training between the syntax activities (they were shown a wildlife video) and two groups which were given motor training tasks to complete with their bare hands. None of these groups showed a significant improvement in the language task.

We also had a group of participants complete the pliers exercise before and after a modified version the language exercise, to ascertain whether the reverse was true. We found practising complex syntactic skills improved motor performance with the tool, though training with simpler syntactic structures did not.

Paleoneurobiology, the study of the brain’s evolution, has indicated that brain areas related to language increased in our ancestors during times of technological boom, when the use of tools became more widespread.

Taken together with modern neuroscience research, this link between language and tool use in the brain is not new. But as we continue to build our understanding in this space, we pave the way to harness this association for good.

We are now considering how we could apply our research findings clinically. For example, it might be possible to support the development of language skills in some patients with relatively well-preserved motor skills, such as young people with developmental language disorders.

Simon Thibault does not work for, consult, own shares in or receive funding from any company or organisation that would benefit from this article, and has disclosed no relevant affiliations beyond their academic appointment.