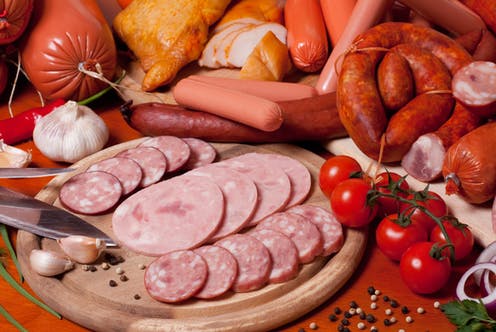 Many of us know that we should steer away from processed meats and eat more vegetables if we want to be healthier and lower our chances of developing certain types of cancers. While there are many reasons processed meats aren’t great for our health, one reason is because they contain chemicals called nitrates and nitrites.

But processed meats aren’t the only foods that contain these chemicals. In fact, many vegetables also contain high amounts – mainly nitrates. And yet research suggests that eating vegetables lowers – not raises – cancer risk. So how can nitrates and nitrites be harmful when added to meat but healthy in vegetables? The answer lies in how nitrates and nitrites in food get converted into other molecules.

Nitrates and nitrites occur attached to sodium or potassium, and belong to a family of chemically related molecules that also includes the gas nitric oxide. Vegetables such as beetroot, spinach and cabbages are particularly good sources of nitrates.

When we eat something containing nitrates or nitrites, they may convert into a related molecular form. For example, nitrate in vegetables and in the pharmaceutical form nitroglycerine (which is used to treat angina), can convert in the body into nitric oxide. Nitric oxide dilates blood vessels, which can reduce blood pressure.

Another example is saltpetre – a naturally occurring nitrate sometimes used to cure pork. During the curing process, most of the nitrate in saltpetre converts into nitrite. It’s actually the nitrites that act as a preservative – not nitrates. They also give the meat its rosy appearance.

And although vegetables mainly contain nitrates, a considerable amount of the nitrate consumed in vegetables is converted into nitrite by bacteria in our saliva. This saliva is then swallowed and so eating vegetables can expose the gut to high levels of nitrite.

It’s actually sodium nitrite – not nitrate – that’s linked to cancer. But if consuming nitrites alone directly caused cancer, then even eating vegetables would be harmful to us. Given this isn’t the case, it shows us that cancer risk likely comes from when the sodium nitrites react with other molecules in the body. So it isn’t necessarily the nitrates and nitrites themselves that cause health issues – including cancer. Rather, it’s what form they are converted into that can increase risk – and what these converted molecules interact with in our bodies.

The main concern is when sodium nitrite reacts with degraded bits of amino acids – protein fragments our body produces during the digestion of proteins – forming molecules called N-nitroso compounds (NOCs). These NOCs have been shown to cause cancer.

Cancer-causing NOCs can form either during the preparation of nitrite-containing processed meats or during their digestion in the gut. This is because both the preparation and digestion of processed meats generate plenty of protein fragments for the nitrites to react with. Research shows that the NOCs already present in the processed meats we eat (known as “preformed NOCs”) are linked with a greater risk of developing rectal cancer than from NOCs that are subsequently formed in the body. By contrast, given that there are far fewer protein fragments in vegetables, these aren’t a significant source of preformed NOCs.

On average, though, more than half of the NOCs people are exposed to are produced in the gut. In fact, a meal of vegetables and protein would seem to provide all the ingredients needed for NOCs to form: nitrates or nitrites from the vegetables, and protein fragments from whatever type of protein is being consumed. And yet this may not necessarily increase cancer risk.

Haem is abundant in meats – and is actually what gives meat its colour. But it’s not naturally present in vegetables. So even nitrate-rich vegetables don’t pose a risk of forming NOCs if there’s no source of haem. One brand of plant-based burger contains a molecularly engineered form of haem, although it’s currently not known if this poses a similar health risk as the haem in processed and red meat.

Another relevant distinction between processed meats and vegetables is that many vegetables and other plant foods contain substances that inhibit the formation of NOCs in the gut. These substances include different antioxidants such as vitamin C, vitamin E and polyphenols. These antioxidants occur in many different foods in a plant-based diet and may go a long way to suppressing NOCs from forming in the gut. But these will not necessarily offer protection against foods already containing NOCs.

The reason NOCs cause cancer is because they damage DNA. This is the first step in cancer, which is why NOCs are sometimes referred to as “tumour initiators”. But other agents, called tumour promoters, are then needed to drive the cancer process forwards. Tumour promoters are produced in high amounts when meat is fried. So it may be that processed meats that are fried – such as bacon and sausages – contain more initiators and tumour promoters and may be more of a cancer risk than non-fried types such as hams.

The nutrients that we consume react together in many different ways – which is why nitrates and nitrites can be safe for us in some foods, and may be harmful when they come from others. However, some advisory bodies now recommend that because of their cancer risk we should eat little, if any, processed meat.

2021-11-11
Previous Post: Facebook will drop its facial recognition system – but here’s why we should be sceptical
Next Post: How The Colour Room brings Clarice Cliff’s story to life