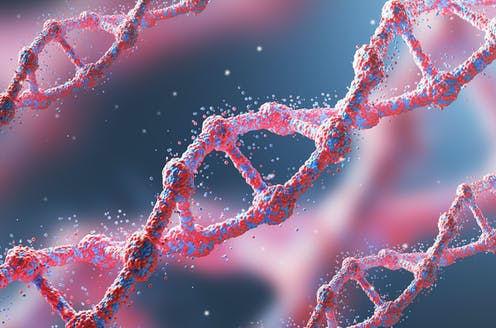 Most people with COVID don’t end up in hospital, but some groups get a very severe form of the disease. As early as the first wave, it was clear that minority ethnic groups in the UK were more likely to die of COVID compared with white people.

A large study published in The Lancet in May 2021, found the risks of being hospitalised, needing intensive care, or dying because of COVID in England were greater for Asian, Black and mixed ethnicity groups compared with white people during the first pandemic wave in the UK (spring 2020).

What might explain this difference? Could it be that the genes carried by certain minority ethnic groups put them at higher risk of severe COVID?

In 2020, the first genetic studies showed that there were indeed genetic differences that resulted in higher risk of severe COVID. After studying the genes in thousands of COVID patients, researchers came up with two suspects: genes called LZTFL1 and SLC6A20.

So the questions that needed answering were: which one of these two genes increases the risk of severe COVID? And how does it do it? A new study, published in Nature Genetics, has found the answer to those two questions.

The researchers, from the University of Oxford, found that it is LZTFL1 that is involved in higher severity disease – not SLC6A20. Fully 60% of people of south Asian heritage carry the higher-risk version of the gene compared with 15% among white people and only 2% of people of African or Afro-Caribbean heritage.

Not only that, but this gene is very active in the layer of cells lining the airways and lungs. This layer of cells, called the respiratory epithelium, warms and cleans the air before it reaches the lungs, where oxygen is absorbed into the blood. It acts as a barrier between the air coming into the respiratory system and the inner tissues of the body and is essential for proper breathing.

The study showed that the high-risk variant of the gene reduces the ability of cells in the lungs to repair damaged tissue and replace lost cells, which may be needed to overcome severe disease. The variant also makes cells have more copies of the two proteins (called ACE2 and TMPRSS2) that allow the SARS-CoV-2 virus to enter cells and infect them. What that means is that people who carry the high-risk gene variant are likely to end up having more cells infected, less ability to heal and therefore a more severe infection.

We don’t yet know how much the disproportionate effect that COVID has had on people of south Asian heritage in the UK is down to this gene, and these findings don’t mean that socio-economic factors haven’t played an important role. We also don’t yet have data on the role of the gene in south Asian countries where far more people are likely to carry it, or what this might mean for efforts to tackle the pandemic there.

But the results of this study are important because they tell us that part of the higher risk in some ethnic groups, such as people of south Asian heritage, is biological. Although there are now vaccines and drugs to treat COVID, the new study shows us a potential way of developing new treatments that target the lungs rather than the immune system – which has mostly been the focus so far. That could be particularly useful for those at risk of serious disease.

_Correction: An earlier copy of this article stated: “The variant also makes cells have fewer copies of the two proteins (called ACE2 and TMPRSS2) that allow the SARS-CoV-2 virus to enter cells and infect them.” It should have said “have more copies”. _