Belarus: border crisis with Poland loses sight of the people trapped in the middle 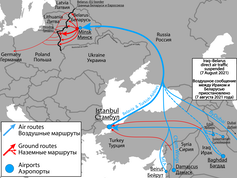 Many of these people have been trying to get through border defences into Poland where security forces are attempting to prevent them from crossing. According to some reports, they are “migrants”, to others, “refugees”. The BBC, for example, reports that Poland fears that Belarus “may try to provoke an incident with hundreds of migrants seeking to cross into the EU”. In the same article, the Belarusian border agency is reported saying “that ‘refugees’ were heading for the EU ‘where they want to apply for protection’.”

Two observations follow: the people stranded at the border are “migrants” for Poland and “refugees” for Belarus. By applying the quotation marks in reporting Belarus’s position, the BBC is implicitly aligning itself with the Polish and EU narrative.

This argument over terminology, as research on the 2015-16 Mediterranean border crisis has demonstrated. As I wrote at the time the way we label, categorise and, in turn, differentiate between those on the move – for example those who crossed the Mediterranean on unseaworthy boats – has had enormous implications on the kind of legal and moral obligations receiving states and societies feel towards them.

But there are other important lessons we learned from the situation in the Mediterranean. For example, how countries are prepared to use displaced people as leverage on the geopolitical chessboard. Many observers have pointed out at Belarus “orchestrating the crisis” as retaliation for sanctions imposed on the government of Alexander Lukashenko by the US, UK and EU.

Some commentators have also suggested that Belarus is acting on behalf of its powerful sponsor Russia, hinting that the agenda behind the current crisis may be more far-reaching.

During the 2015-16 Mediterranean border crisis, Turkey and Russia were, at different points accused of weaponising refugees to destabilise the EU. Turkey was accused of playing politics with its border policy with Syrian refugees, until it eventually negotiated a financially and politically advantageous deal with the EU in December 2015, which led in just a few weeks to the flow of Syrians into Lesbos drying up. Russia was accused of using its airstrikes in Syrian border regions to push displaced people to cross the border and move west.

But, in truth, this was nothing new either. States have used displaced people as political leverage and human shields, to create chaos, instability, or retaliate against other countries for a long time. This, arguably, was one reason why the 1951 Refugee Convention and the UN High Commissioner for Refugees were established after the second world war to protect people caught between battling states.

And, while understanding the geopolitics behind the current border crisis is useful and relevant, the protection of vulnerable people stranded at the EU border and their humanitarian needs should remain paramount, as well as their right to claim asylum.

It is important also to remember that while Belarus and Russia may be acting behind the scene to orchestrate the crisis, the situation at the border between Belarus and Poland is not the full story. People at the border began their journeys weeks – sometimes months – earlier. Many are coming from Taliban-controlled Afghanistan, others from Iraq, a country on the verge of a new civil war, or from Kurdistan. We don’t know.

And we won’t, until people are no longer treated like parcels, pushed back and forth between posturing military forces. If they are victims of persecution and human rights abuses, they must be allowed to tell their stories and apply for asylum in a safe country.

We should also remember that since the Mediterranean border crisis the EU has invested a huge amount of resources in securing and – as far as has been possible – closing down Mediterranean sea routes. So the opening of new land routes should not come as a surprise. In truth, land routes had long been in use for unauthorised migration until the significant increase in the use of fences, barbed wire, walls and other border technologies made them harder and more hazardous for migrants.

Another angle of this unfolding border standoff, is to understand how the fraught relationship between the EU and Poland will play out. Given its fraught relationship with the EU, Poland calling on the bloc for help, as Italy did on multiple occasions during the Mediterranean crisis, is not straightforward. Requesting Nato’s help may be easier for Poland at the moment, but this requires the militarisation of the narrative.

From the EU perspective, the crisis presents many dangers. It is well aware that how this crisis is handled may have repercussions on a potential “Polexit” if the border crisis pushes broadly pro-EU Polish public opinion towards the government, which is increasingly hostile to the EU. This would be a major strategic victory for Russia.

There’s also a parallel with Brexit. Many will remember Nigel Farage posing in front of a billboard portraying a long queue of refugees, hinting at a possible invasion of Britain and accusing the EU of failing to “protect our borders”. Similar images of vulnerable migrants paraded by Belarus military forces pressing at the border have shocked the Polish public – and no doubt anti-EU politicians in Poland and elsewhere are more than ready to use them to achieve their goal.

In the middle of all this, thousands of people are experiencing hunger, freezing temperatures, violence and fear, kicked back and forth like footballs, between two military forces.

Nando Sigona has received funding from the Economic and Social Research Council (ESRC) as Principal Investigator for Rebordering Britain and Britons after Brexit (MIGZEN) and as Co-Investigator for Unravelling the Mediterranean Migration Crisis (MEDMIG).