Vaccine trial misconduct allegation – could it damage trust in science? 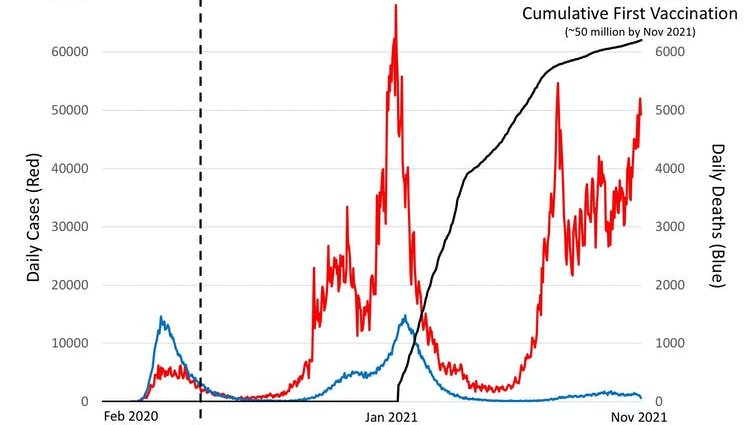 The success of medical research has been one of the few positives of the COVID pandemic. The effectiveness of vaccines in preventing deaths (see graph below), is particularly impressive given the short time in which they were developed. But if recent allegations from a whistleblower about a Pfizer vaccine trial can be proven, they would indicate that time and financial pressures may have led to serious misconduct.

The whistleblower is Brook Jackson, previously a regional director at a Texas-based contract research organisation called Ventavia, who supplied an account to the BMJ. She alleges that Ventavia falsified data, “unblinded” patients (that is, researchers could see who was receiving the vaccine and who the placebo), employed inadequately trained vaccinators, and was slow to follow up on adverse events during one of the final trials.

Given the size of the vaccine trial, and the many centres involved, bad data from a few rogue centres is unlikely to fatally undermine the evidence needed for licensing the Pfizer vaccine. But it is important to examine allegations because research misconduct is a serious issue, especially if linked to a vaccine being given to millions of people. If the alleged activity turns out to be true, there must be severe consequences for Ventavia and those involved.

Evidence from the UK that COVID vaccines prevent deaths

The international rules for conducting clinical trials are described in the World Medical Association’s Declaration of Helsinki. This document lays out the conditions and considerations needed for researchers and doctors to act with integrity when conducting research.

Research integrity has two aspects, both of which are alleged to have been a problem at Ventavia. Poor record-keeping, glossing over errors and drugs stored inappropriately are breaches of methodological integrity, while reports of participants waiting in corridors (when they were supposed to be under observation) and delays in following up side-effects are breaches of ethical integrity.

While ethics and safety regulators play an important role in the design and conduct of trials, ethics committees and inspectors cannot be aware of everything that goes on. Ethical conduct in particular is based on trust that researchers will carry out their work under the rules agreed with the ethics committee. Similarly, safety regulators are not in the position of policing all aspects of trials. In this case, while the US regulator (the Food and Drug Administration) was reportedly trying to monitor the trial, it only inspected nine out of 153 sites, not including any of the Ventavia sites.

Ventavia is aware of recent accusations in an article written by Paul Thacker [investigative reporter and author of the BMJ article]. Mr. Thacker did not contact Ventavia prior to publication. The accuser was employed for approximately two weeks in September 2020, and no part of her job responsibilities concerned the clinical trials at issue. These same accusations were made a year ago, at which time Ventavia notified the appropriate parties. The allegations were investigated and determined to be unsubstantiated. Ventavia takes research compliance, data integrity, and participant safety very seriously, and we stand behind our work supporting the development of life-saving vaccines.

Medical research is a complicated activity and the careful work needed to produce reliable results often takes a long time. Indeed, recent problems at a UK testing centre – where around 43,000 people may have been wrongly told that their COVID test was negative – show that it is easy to make mistakes, even when conducting the same laboratory process tens of thousands of times. For this reason, universities and other research institutions are required to provide training in research integrity, alongside having processes to detect and investigate serious integrity issues.

In parallel, work by research funders, academic societies and research charities is continuously trying to identify the pressures that lead to integrity issues. Perhaps unsurprisingly, time and money pressures frequently top the list. As the COVID dust starts to settle, more allegations like this will undoubtedly be made.

While misconduct is always regrettable, it is not unexpected. Sometimes the scientific method can be presented in an almost mythical way as if it is somehow entirely objective. This view is incorrect.

In reality, science is a human activity conducted by people with different motivations. But perhaps the difference between science and other activities is that systematic efforts are made to check and confirm results. This does not stop some worrying that science has a “reproducibility crisis” (the problem that not all experiments can be repeated), or that there is a great deal of research waste (research with no societal benefits), or that misconduct requiring retractions does occur, but scientists are aware of these problems and are trying to address them.

Take, for instance, the former physician Andrew Wakefield’s fraudulent research – published in The Lancet, but subsequently retracted – which claimed a link between the MMR vaccine and autism. This was a clear and serious breach of research integrity, and although it caused a lot of harm, it also led to thousands of studies both refuting the fraudulent research, but also arguably advancing vaccine science to the point that it was able to contend with SARS-CoV-2 when it arrived. The Wakefield scandal also caused a great deal of self-reflection and many positive actions trying to prevent such things from ever happening again.

COVID science has produced some amazing results, but it is still too early to fully assess the overall value of the research efforts. Given the vast amount of funding, and thousands if not millions of researchers working on COVID, alongside the successes there will inevitably be more examples of alleged misconduct – leading, inevitably, to sensationalist headlines. But when this happens, it is important to remember how many lives the vaccines and other treatments have saved. Yes, science is a human activity. Yes, integrity can be a problem. Yes, fraud and misconduct will occasionally occur, but science also produces remarkable results.

Simon Kolstoe does not work for, consult, own shares in or receive funding from any company or organisation that would benefit from this article, and has disclosed no relevant affiliations beyond their academic appointment.

2021-11-08
Previous Post: HPV vaccine cuts cervical cancer cases by almost 90% – but one in ten girls still haven’t been vaccinated
Next Post: Maitland-Niles puts transfer exit demands behind him to star again under Arteta