Taoiseach arrives at Cop26 amid ‘one minute to midnight’ climate warning 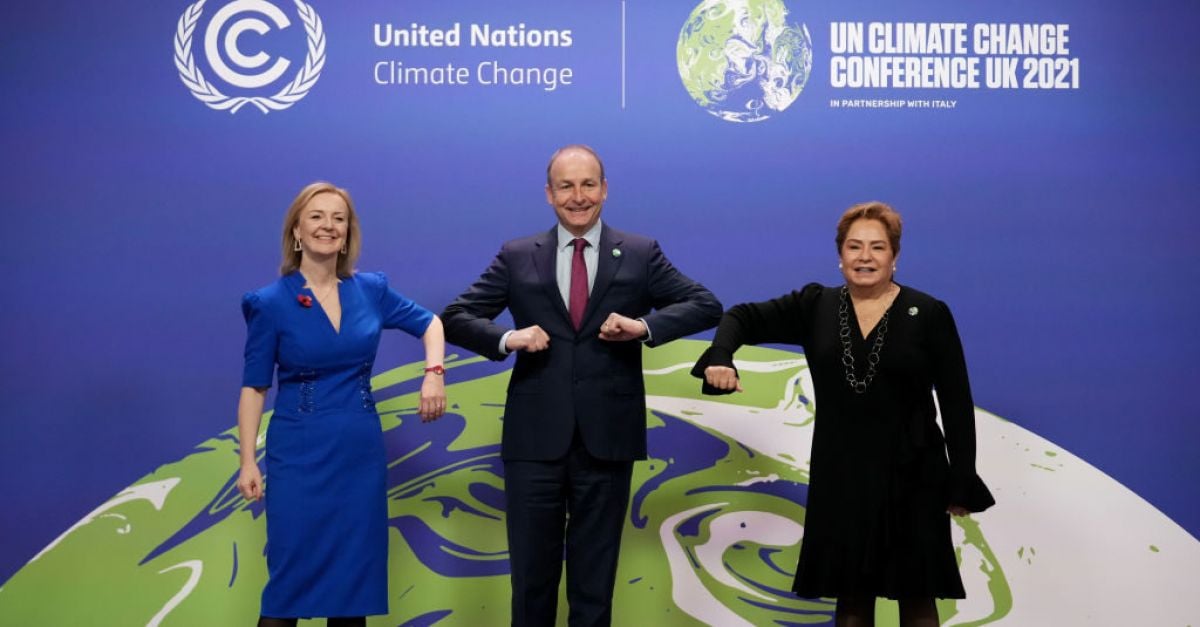 World leaders have gathered at the crunch climate summit in Glasgow amid warnings that they must take urgent action to limit dangerous global warming.

The issue for Cop26 on climate change is “matching the rhetoric with action”, Taoiseach Micheál Martin has said.

“There’s no alternative facing the world but to deal very quickly and urgently with the climate change challenge,” he said.

Meanwhile, delegates arriving at the conference faced long queues to get into the Scottish Event Campus venue on Monday for the opening ceremony.

British prime minister Boris Johnson, who was welcoming leaders to Glasgow for the talks alongside UN secretary-general Antonio Guterres, will tell them that humanity has “long since run down the clock on climate change” and must act now to tackle the crisis.

Prince Charles, who will address leaders alongside Mr Johnson, is expected to stress the urgency of action – calling for the world to be on a “war-like footing”.

Around 120 heads of state and government are set to attend the world leaders’ summit at the start of the Cop26 talks, where countries are under pressure to increase action in the next decade to tackle dangerous warming.

US president Joe Biden, European leaders and India’s Narendra Modi are among those attending the talks, although the heads of key major economies including China’s Xi Jinping and Russian President Vladimir Putin will not be there.

The conference in Glasgow is seen as the moment when countries must deliver on pledges made in the accord agreed in Paris six years ago, to limit temperature rises to well below 2C above pre-industrial levels and pursue efforts to curb warming to 1.5C – beyond which the worst impacts will be felt.

There is also pressure on developed countries to deliver a long-promised $100 billion a year in climate finance for poorer countries least responsible for and most vulnerable to climate change, and address loss and damage caused by the impacts of global warming.

And there will be efforts to drive action by countries, regions, and businesses to curb emissions in sectors such as power with efforts to phase out coal, as well as finalise parts of the Paris climate accord agreed in 2015 to make it effective and operational.

Countries’ plans for cutting emissions in the next decade – key to limiting long-term temperature rises – leave the world well off track to meet the climate goals and put the planet on course for a dangerous 2.7 C of warming.

Glasgow is not expected to close that gap, so there is pressure to negotiate a road map for increasing ambition in the next 10 years to keep the 1.5C goal within reach.

At the opening ceremony of the world leaders’ summit on Monday, Mr Johnson will say: “Humanity has long since run down the clock on climate change.

“It’s one minute to midnight, and we need to act now.

“If we don’t get serious about climate change today, it will be too late for our children to do so tomorrow.”

He is also expected to say: “We have to move from talk and debate and discussion to concerted, real-world action on coal, cars, cash and trees.

“Not more hopes and targets and aspirations, valuable though they are, but clear commitments and concrete timetables for change.

“We need to get real about climate change and the world needs to know when that’s going to happen.”

Addressing the Cop26 opening ceremony, Prince Charles will warn: “We have to put ourselves on what might be called a war-like footing.”

And he will urge world leaders to systematically engage with business to solve the climate crisis, saying: “We need a vast military-style campaign to marshal the strength of the global private sector, with trillions at its disposal.”

The opening ceremony will also hear from naturalist and broadcaster Sir David Attenborough, who is the Cop26 people’s advocate, and UN chief Mr Guterres.

World leaders will then set out the national action they are taking to tackle the climate crisis, while there will also be announcements on areas such as curbing deforestation and cutting methane during the two-day leaders’ summit at the beginning of the two weeks of talks.

The start of Cop26 comes on the back of the G20 summit in Rome, where the leaders of the major economies – responsible for 80 per cent of the world’s emissions – agreed to reach carbon neutrality “by or around mid-century”.

Politicians in attendance in Italy also pledged to end public financing for coal-fired power generation abroad, but did not commit to phasing out domestic coal consumption.