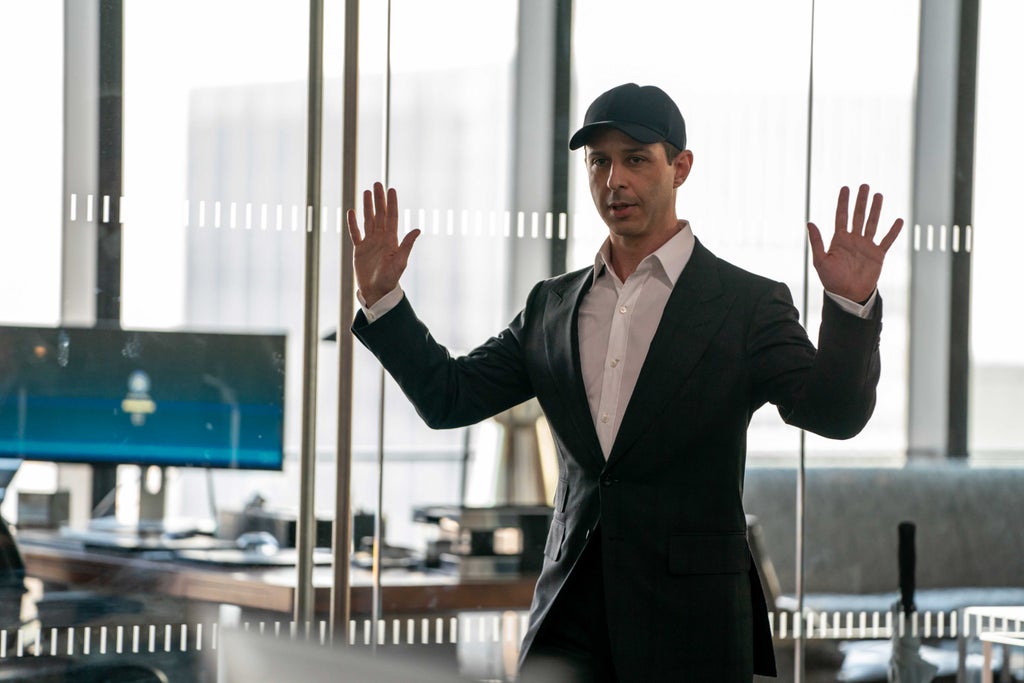 h, good. It’s a relief to see the Roys actually go outside in Succession’s third instalment. After two straight episodes of people growling “what’s your game?” down the phone while hiding in the toilets of private jets or expensive hotel rooms, they’ve reentered the public realm to face the music. And that music was… quite loud and not very pretty (quite literally, at one point).

It’s clear from the first scene that Kendall (Jeremy Strong), having gleefully blown up Waystar and sent his family reeling after his nuclear press conference, is now becoming increasingly erratic. We see him giving an interview, just a little bit too eagerly, offering nuggets about his siblings, such as, “I’m just really happy in my headspace and I hope they’re happy in theirs.” Spoiler alert: Kendall is not happy in his headspace. He’s become addicted to chaos and watching videos about himself on the internet.

Meanwhile, Logan (Brian Cox) is still prowling around like a grizzly bear who’s been bopped on the nose, variously telling his kids they’re his fave in order to get them to do things for him. Any time that Gerri (J. Smith-Cameron), now installed as CEO, asks when they might begin to “play ball” with federal investigators, he snarls “tell ‘em to f**k awwfff!” His strategy is to send his children out to bat, with Shiv (Sarah Snook) fronting a townhall meeting to answer questions from Waystar employees about allegations of wrongdoing, and Roman (Kieran Culkin) giving an interview where he completely organically and not under duress at all shares special memories of Logan being a great dad. First though, there’s a bit of luxe black-tie scent-marking and sniffing at a fancy journalism dinner, where Shiv, looking like an incredible velvety diva, tries to neutralise Kendall by suggesting it’s better to push for change from the inside. Kendall, alarmed by his sister’s emerging position at Waystar, ominously declares, ”It’s you now… I’m sorry for you, Shiv.”

Possibly because he’s no longer in an environment where he can wear a gilet, Tom Wambsgans (Matthew McFadyen) is getting nervy. For my money there haven’t been enough quality scenes between Tom and Greg (Nicholas Braun) so far this series, but we did at least see Tom move Greg into a new office – which looked like that cupboard where you put stuff you don’t use but haven’t thrown out yet – and softly whisper, ”The DOJ’s gonna be like a combine harvester in a field full of dicks.” Paranoid about his role in the cruises scandal, he wants him and Greg to get their stories lined up, but Greg’s already agreed to go to a party with Kendall, who has promised to buy him an expensive watch. “I’ve always been self-conscious about my wrists, this might help that,” he says, before learning that the watch isn’t a gift – Kendall only planned to “hook him up”. Not a great day for the world’s favourite cousin.

Later, Tom, having discovered from a lawyer that he’s likely to face prison, sidles up to Logan and says that if he “needs to strategise”, he’s prepared to go behind bars. “I won’t wriggle. Just clunk the trout on the head and put it in your pouch.” Why does he, the sweet neurotic man, do this? Is he really willing to take one for the team to secure the family’s loyalty, or does he have something up his sleeve?

In the lead-up to the townhall, Waystar employees had been sending in questions like “I’m embarrassed to tell my mother I work at Waystar, any advice?” Roman, who hasn’t proffered any major power moves yet but is getting some of the best lines, asked, “can we get different questions, less question-y questions?” I feared for Shiv, having to front the meeting, not least because it was being, um, livestreamed across the world. Already it was an event that would give any HR department a migraine, and then… Kendall decided to show up. As Shiv walks out like a trooper and starts delivering a slick speech, you think maybe she’s got the gonads to carry it off. Unfortunately, Kendall has gone mad in Argos and bought a load of hefty speakers, and drowns out Shiv’s statement about alleged sexual assaults by playing… Rape Me by Nirvana. “I assure you we take this issue very seriously, even if someone here… does not,” she stutters.

Kendall, seeing the onslaught of media criticism he’s facing as “being part of the conversation” rather than backlash, has agreed to go on the TV show of Sophie Iwobi, a talk show host who has been heavily critical of his behaviour. Except the car crash interview never happens. Shiv, humiliated by having her townhall speech derailed, has decided to “cut him off at the legs” with a savage statement about her concern for his mental health, touching on his addiction issues and “misogynistic rants” and “disordered thinking”.

Finally, Gerri turns up and says the thing no one wants to hear after a stressful day at work: “The FBI is downstairs.” Logan, touching similar levels of delusion to Kendall, asks, “can’t we ask them to come back tomorrow?” This might be the moment that the Roys realise that even an army of devoted, flustered minions can’t stop reality from catching up with you.

Having already strengthened her position by ascending to president, this week Shiv got ruthless. Her statement about disowning Kendall showed no mercy – no wonder Roman or Connor wouldn’t go anywhere near it. And yet, I don’t think it’s as simple as her putting power above family. The way she spat in Kendall’s diary after he bulldozered her townhall speech showed that he’d personally wounded her in a way that she’ll find difficult to forgive.

GOING DOWN: everyone else

The speed with which Kendall was going off the rails suggested that if his family didn’t neutralise him, he’d probably self-implode sooner or later. But his very public defenestration by Shiv makes it very hard for him to build any kind of power base in the near future. At the same time, the FBI have swarmed the Waystar building and the Roys are in freefall. An absolute ’mare for all concerned.

Kendall’s addiction to googling himself manifests in all environments, including while drinking champers in stretch limos with his pals. The game ‘good tweet or bad tweet’ basically involves… reading out tweets about Kendall. “Allies don’t always come in the form we like, but what Kendall Roy did was important and brave,” reads a Good Tweet. “BOOM!” says Kendall. Fun game then, until this Bad Tweet: “He clearly has mental health issues and crazy guilt, coupled with addiction. That’s all this is, and it’s sad.” Massive awkward silence.

In his interview about his dad, Roman shared a cute memory about a fishing trip. Logan, whose review of the interview is “oooh I want my daddy”, says he can’t remember that trip. That’s because it was actually with Connor, Roman explains. “Single multi-use happy childhood memory,” he shrugs. It was the most quietly devastating moment of the episode. Get him a therapist, pronto.

Had his interview with Sophie Iwobi gone ahead, Kendall would never have been able to keep up, with her delivering zingers like “he suffers from a severe case of what doctors call caucasian rich brain.” But my favourite line this week came from Connor, cheerfully incredulous at Shiv’s brutal statement about Kendall. “It’s kind of a greeting card from hell. It’s a Times New Roman firing squad.” They don’t sell those in Paperchase.

Succession continues Mondays on Now and on Sky Atlantic at 9pm

2021-11-01
Previous Post: Breast milk companies are popping up around the globe – why haven’t governments stepped in?
Next Post: This Amazon dam is supposed to provide clean energy, but it’s destroying livelihoods and unique species