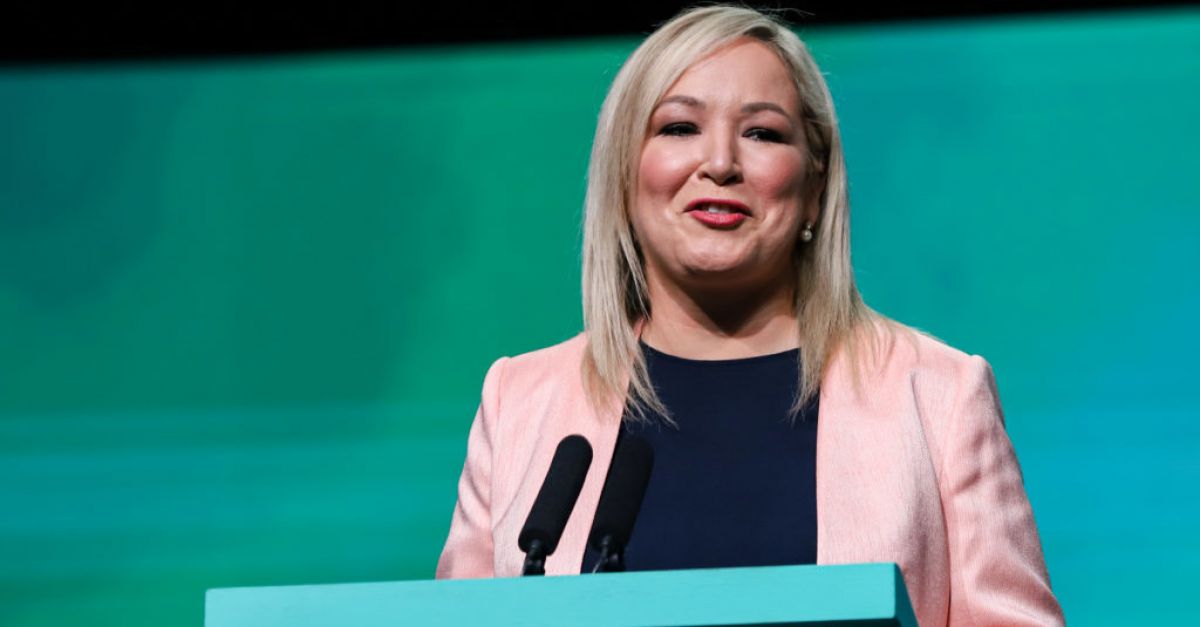 Michelle O’Neill has hit out at the DUP for “rolling back” on political agreements, accusing the party of denying rights and equality.

The Sinn Féin deputy leader used her opening speech at the party’s Ard Fheis to criticise the Democratic Unionists, accusing the party of “provoking outrage” by boycotting the North-South Ministerial Council.

Sinn Féin is holding its annual conference in north Dublin, and TDs and Stormont ministers are speaking at the scaled-back event.

Ms O’Neill said the balance of power at Stormont has “shifted irreversibly” and the political unionist majority is gone.

“The DUP roll back on political agreements, their continued denial of equality and rights is dead-end politics,” she said.

“It is for the people to decide the next first minister, not the DUP. Sinn Féin is aiming to return as the biggest party, not for the sake of it, but to deliver change.

“This is now about those of us who want to work together to make the Assembly and Executive work, to deliver on health and education, to deliver progressive change, taking on those who want to maintain the status quo and resist that change.

“Their boycott of the North-South Ministerial Council has been declared unlawful by the High Court.

“Their futile stunt to provoke outrage is in vain. Harking back to a bygone era of unionist rule is a lost cause too.

“The DUP has declared that a Sinn Féin first minister after the next election would give unionism a real problem.

“Well, let me be crystal clear. The days of nationalists need not apply are gone. The days of denying abortion rights to women, to LGBT citizens, and Irish language speakers are gone.

“It is for the people to decide the next first minister, not the DUP. Sinn Féin is aiming to return as the biggest party, not for the sake of it, but to deliver change.”

Ms O’Neill said the party will nominate a first minister and vowed to return as the largest party in the North.

She also questioned if the British government wants to reach an agreement with the EU on post-Brexit issues.

The Mid Ulster MLA said there is no “credible” alternative to the Northern Ireland Protocol.

“I reminded the British government this week that a majority in the North see the protocol as the solution to their Brexit disaster,” Ms O’Neill told the Ard Fheis.

“Businesses in the North continue to access the single market. They want the protocol to work.

“They want certainty and they want solutions. However, the new red lines set out by the British government begs the question do they want a solution at all?

The deputy leader also criticised the British government proposals to end all prosecutions for Troubles offences.

She accused the British government of attempting to “hide” its role during the Troubles.

“Sinn Féin will stand with the families of all victims and lobby the EU and US in support of the Stormont House Agreement and against this universally rejected policy from Downing Street,” Ms O’Neill added.