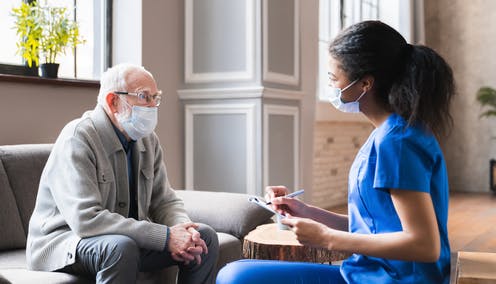 The care sector is struggling to recruit and retain staff, as England enters the next phase of its COVID-19 recovery. So why are care workers leaving the sector in droves, and what can be done to bring them back?

Skills for Care (an independent charity partnered with the Department of Health and Social Care in England) has reported that staff vacancy rates for adult social care in England have now risen above pre-pandemic levels, and may soon reach record-high figures.

Levels of staff sickness nearly doubled during 2020-21 and there were an average of 105,000 daily social care vacancies (about 6.8% of the sector) in England between April and August 2021, according to the report.

Before the pandemic, there were concerns that demand for adult social care in the UK was beginning to outstrip availability. This was largely due to the impact of low pay and overwork on recruitment and retention and, in turn, on the quality of care.

News coverage of care work focused on poor working conditions, such as the number of care workers on “zero hours” contracts, where an employer is not obliged to offer the employee a minimum number of hours. High turnover and employee exhaustion from compensating for staff shortages were also a concern.

These issues have been exacerbated recently – by mandatory vaccines for staff working in care homes and the impact of Brexit on the ability to recruit from the EU. The ageing UK population has also resulted in more people requiring care.

Additionally, the recent cut to universal credit will cause many care workers to face the biggest drop in their income since 2010.

Care workers are often asked why, if their working conditions are so poor and they are offered so little financial reward or recognition, do they continue to care? Social care researchers have long argued that workers will be more willing to accept a lower wage if they consider the work itself to be rewarding or fulfilling.

I found this to be the case in my own research on care workers at “Oakwood” – a high-cost residential care home for older people in England (the name of care home has been changed).

The training manuals and videos shown to workers during their induction reinforced the idea that workers who acted on their “natural”, altruistic motivations would find the work rewarding. The company handbook described “the feeling that you are making a difference in so many lives” as the best benefit of working for the company.

In interviews, new carers told me the role would allow them to express their philanthropic nature and realise their true self. One person described care work as offering “that double whammy…a career and job satisfaction as well”. Experienced care workers also described the “fulﬁlment” and “satisfaction” they felt when “going home exhausted” or when leaving care recipients “happy, smiling [and] reassured”.

I also found that some care providers were aware that if care workers gained satisfaction from their job they, as employers, could justify lower pay. This was clear when Oakwood’s CEO explicitly referred to hugs from care recipients and “thank yous” from their families as employee benefits – what he called a “second paycheque”. Care workers appraised their work performance in terms of whether they gained a sense of personal worth or gratitude from their clients or their clients’ families.

If the moral currencies of hugs and thank yous were previously working as a sticking plaster for low pay and long hours, why are care workers now leaving their jobs in greater numbers?

One reason may be the COVID safety measures that have placed physical barriers between care workers and those they care for. Some care workers have said that measures like wearing PPE, social distancing and an absence of visitors to care homes are damaging morale.

In my ongoing research, I am hoping to find out more about the pandemic has altered the close, intimate relationships between care workers and older people, which previously allowed some care workers to find dignity and reward in their work.

One care home worker told me that short staffing and increased paperwork during the pandemic has resulted in less time to interact with people receiving care, and to “make a difference to their day”.

Another worker said she may soon leave the care sector, in part because she now receives “no thank you at the end of shift, when you’ve killed yourself to make sure your residents are 100 [percent]”.

Others have described feeling less valued and respected than their NHS counterparts, who were more often described as “heroes” during the pandemic.

Relying on and taking advantage of care workers’ altruism in place of offering them appropriate wages was never ethical. But now that care workers feel undervalued in terms of both financial reward and emotional recognition, it is unsurprising that many are seeking employment elsewhere.

If we are to encourage care workers to stay in their roles, as well as filling the estimated 490,000 additional social care jobs needed by 2035, we need to improve conditions of work.

The staff shortage will only be solved by showing care workers that we appreciate what they do – not just in hugs, thank yous and claps – but with higher wages, job security, and proper employment contracts.

Eleanor Johnson is a Research Fellow at the University of Bristol and receives funding from the National Institute for Health Research, School for Social Care Research. Her previous research was funded by the Economic and Social Research Council.

2021-10-15
Previous Post: Death in space: here’s what would happen to our bodies
Next Post: Brexit fears started hitting UK trade as early as 2015 – new research