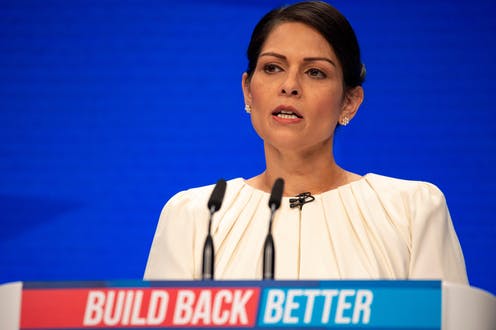 Home Secretary Priti Patel is proposing new police powers and tougher penalties for protesters, including giving courts the power to ban activists with a “history of disruption” from travelling to particular protests.

Patel justifies this by saying that some protest, like the recent obstruction of motorways by climate activists, causes “disruption and misery across our communities”. This kind of rhetoric rests on a false divide between “acceptable” and “unacceptable” forms of protest, a distinction research has shown police apply arbitrarily in the field.

The penalty for “obstructing a highway” will also increase from a £1,000 fine to an unlimited fine, six months imprisonment or both. These proposals will become a part of the controversial Police, Crime, Sentencing and Courts Bill, currently making its way through parliament. They represent a step in the wrong direction for democracy and human rights.

Human rights scholars note that Patel’s proposals interfere with Article 11 of the European Convention on Human Rights – codified in UK law as part of the Human Rights Act (1998) – which protects freedom of assembly and association. As independent police monitoring group Netpol summarises, they are also a departure from government-endorsed UN guidance on international human rights and contravene precedents set by the House of Lords.

The policing bill already represents an authoritarian expansion of executive and police powers. It will introduce a maximum sentence of up to ten years in prison for “public nuisance” and allow police to impose maximum noise levels and start and finish times on protests. It will increase fines and punishments for “unauthorised” encampments, further criminalising Gypsy and Traveller communities, and will give the home secretary the power to define “serious disruption”.

The bill has been widely criticised by charities, NGOs, academics, human rights groups and even some former senior police.

Aside from being draconian, this bill is also unnecessary. The police and courts already have more than enough power to restrict protest under the Public Order Act (1986). Police also use a vast array of criminal offences such as “aggravated trespass” and “obstruction of a highway” to this end to detain protesters. Not to mention the proliferation of “conspiracy to” charges which have been used against protesters.

In recent years, anti-deportation activists were prosecuted under obscure terror-related legislation, and archaic laws were used to imprison anti-fracking activists. Both verdicts were rightly quashed at appeal. Observers raised concerns about police treatment of activists during Black Lives Matter protests in 2020.

A recent parliamentary inquiry found the police had breached fundamental rights, using “excessive force” to disperse a peaceful vigil following Sarah Everard’s murder. Everard was abducted, raped and murdered by a serving police officer, Wayne Couzens, who the Crown Prosecution Service said may have exploited COVID powers to arrest her. Police would later use similar powers to detain women at the vigil in her memory.

Repression by police also takes more secretive forms. My own research has explored the corrosive impact of undercover policing on activism. Since 1968, more than 1,000 mostly left-wing groups have been spied on and dozens of women have been deceived into sexual relationships with undercover police officers or “spycops”.

Read more:
Inquiry into undercover police who had sexual relationships with their targets is finally underway – but can their actions ever be justified?


An independent court investigating state surveillance recently ruled that the Metropolitan police violated five different conventions of European human rights law in targeting activist Kate Wilson, who was deceived into such a relationship.

I have found that politicians, police and the media tend to explain away misconduct with a narrative of “rotten apples”, or in Metropolitan police commissioner Cressida Dick’s own words, “occasional bad ‘uns”.

On the contrary, the proposed travel bans draw even more attention to the longstanding structural issues within the police. These have already been highlighted by spied-on activists, victims of sexual misconduct and detained protesters.

Following significant pressure, the home secretary has launched an inquiry into issues raised by Couzens’ conviction. Given the slow pace and lack of transparency of the undercover policing inquiry, many aren’t holding their breath.

Grassroots protests imploring parliament to “kill the bill” are a source of hope. Campaigners rightly join the dots between the connected issues of police power, institutional sexism and racism, human rights and democracy. Instead of making it harder to protest, these are the issues the government must address. A good start would be the National Police Chiefs’ Council adopting Netpol’s Charter for Freedom of Assembly Rights to protect protest rights going forward.

Patel’s talk of the “disruption and misery” caused by protesters needs to be reconciled with a stark reality. We cannot even begin to conceive of the scale of disruption and misery that will accompany global ecological catastrophe unless urgent action is taken on climate change.

Disruptive protest is an essential feature of democratic society and a fundamental human right. Without disruption, protest becomes a futile performance. These new proposals suggest that this government views the only “acceptable” protest as one that does not disrupt, nor achieve, anything.

Nathan Stephens-Griffin does not work for, consult, own shares in or receive funding from any company or organisation that would benefit from this article, and has disclosed no relevant affiliations beyond their academic appointment.

2021-10-12
Previous Post: Wayne Rooney reveals his dad would give him a slap during blazing rows after growing up fighting on streets as kid
Next Post: China and Taiwan: why the war of words is unlikely to lead to military conflict (for now, at least)