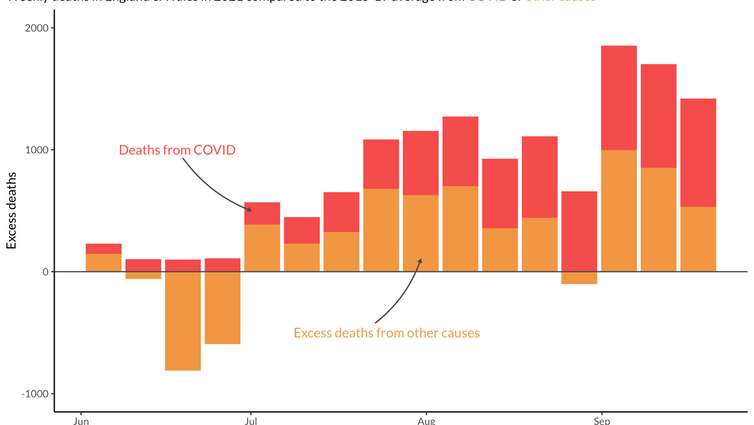 COVID restrictions in England were lifted on July 19, and although COVID cases are currently soaring in schoolchildren and their parents’ age group, many feel that the worst of the pandemic is now over. Thanks to the tremendous effectiveness of COVID vaccines, further lockdowns seem unlikely. However, a look at recent mortality data reveals that everything is not yet back to normal.

Since the start of July, almost 13,000 more deaths have been registered in England and Wales than the average for the same period in 2015-19. The week ending September 24 saw 1,420 excess deaths. These numbers are small compared with the darkest days of the first wave when excess deaths in the two nations exceeded 11,000 a week, but they are still substantial. It is surprising that more attention hasn’t been paid to them.

Perhaps the most striking thing about recent mortality data is that only around half of these excess deaths have been directly from COVID. So what else are people dying from in 2021 that they weren’t in pre-pandemic times?

Analysis from Public Health England shows that recent months have seen more deaths from cardiovascular conditions, liver disease and diabetes than the same months in the five years before the pandemic.

But are these deaths really unexpected? The population of the UK is growing and ageing – both factors mean that we would expect the number of deaths to increase gradually over time.

An independent research body that specialises in analysing mortality and sickness rates in the UK, called Continuous Mortality Investigation (CMI), accounted for these changes by calculating age-standardised mortality rates. Their analysis finds that adjusting for these factors eliminates the non-COVID excess deaths. So it is true that more people are dying from non-COVID causes than in previous years, but this is due to the population getting older, rather than rising mortality rates.

Of course, 888 deaths from COVID in the most recent week of data is still a tragic loss. However, there are other reasons why we might still be concerned about mortality from other causes.

The first of these lies in what demographers call “mortality displacement”. This effect arises from the fact that the people who have died during the pandemic were, on average, in poorer health than their peers. As a result, some of them would have sadly passed away in subsequent months, even if COVID had never happened. This means that we might expect mortality rates from other causes to fall, as the people who would have died had already been taken early by COVID.

We can see evidence of this effect if we look at the cumulative number of excess deaths in 2021 compared with the 2015-19 average. The Christmas wave resulted in over 33,000 more deaths than would usually occur in January and February. But we then saw almost 10,000 fewer deaths between March and June before the delta wave struck. This means that if COVID disappeared tomorrow, we would expect to see fewer deaths than in pre-pandemic years. The fact that we are currently seeing roughly the same number, according to the CMI, suggests that the current picture is less rosy than it appears and that more people really are dying of non-COVID causes than we would expect. Why might this be?

The effects of the pandemic on society have been huge, particularly on healthcare services. Hospitals have been overwhelmed with COVID patients, with a huge knock-on effect on treatments for everything else. In 2020, the number of patients completing elective treatment in England fell by 4 million compared with 2019.

At the same time, the number of new early cancer diagnoses fell by more than a quarter compared with pre-pandemic levels. Consequently, fewer people have been identified as needing treatment and those who were referred are waiting longer to receive the care they need.

There have also been major changes to people’s willingness or ability to seek medical help during the pandemic, meaning fewer people have attended GP surgeries and hospitals for non-COVID health problems. This has led to a big shift in the places people have been dying over the past 18 months. Outside of the major COVID waves, deaths in hospitals have been considerably lower than previous years, while deaths at home have been consistently higher.

There have also been big changes in people’s health-related behaviour. Rates of smoking in younger adults and heavy drinking across all age groups increased during the first lockdown, and deaths due to alcohol rose by 20% in 2020 compared with 2019. Whether these changes in people’s behaviour persist as things return to normal remains to be seen. But the effects they have on people’s health are likely to continue for some time.

The effects of the pandemic on health and healthcare in England will be deep and long lasting. People are still dying from COVID, and although we may not be seeing more deaths from other causes than we might expect, after accounting for population growth, the scars that the pandemic leaves on mortality data will be seen for decades to come.

Colin Angus does not work for, consult, own shares in or receive funding from any company or organisation that would benefit from this article, and has disclosed no relevant affiliations beyond their academic appointment.

2021-10-05
Previous Post: Eco-feminists are tackling climate change head on
Next Post: Fury vs Wilder 3 ring-walk time CONFIRMED: What time will they make way to ring?