‘I don’t feel like a person anymore’: the emotional side of claiming universal credit 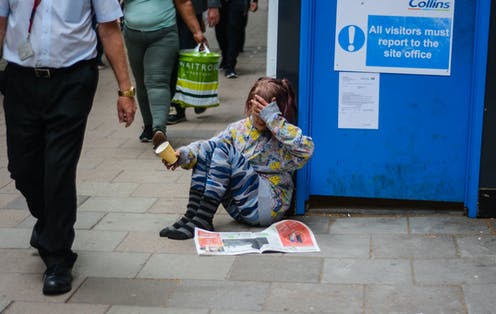 Nearly 6 million people claiming universal credit will soon see their payment cut by £20 a week, as the temporary “uplift” in response to the pandemic is removed.

Analysis from the anti-poverty charity Joseph Rowntree Foundation described it as “the biggest overnight cut to the basic rate of social security since the foundation of the modern welfare state”.

Whitehall’s own analysis described the cut as “catastrophic”, and predicted increases in homelessness and poverty. At the same time, the cost of living is rising, including large increases in energy bills, and is expected to hit lower income households the hardest.

Claiming universal credit impacts individuals and families in many ways beyond the financial. The emotional, mental and physical impacts are dire – and a £20 cut will have devastating impacts on many people’s wellbeing.

In my fieldwork on people’s experiences of “getting by” while claiming universal credit, I heard firsthand accounts of the mental toll of their experiences. I spoke with 15 individuals aged between 20 and 62 years old with a range of personal circumstances. Four interviewees were working and the rest were either looking for work, not considered fit for work or had caring responsibilities.

As this research took place before the COVID-19 “uplift”, their stories offer a glimpse into what many more individuals and families will experience after the £20 cut.

All participants were concerned about money. The majority could not afford essentials such as food and utilities, and some feared losing their homes. Zara explained how this made her feel:

I don’t feel like a person anymore. Like it’s not a life … You are scraping on to the next month. … Like how can a government turn round and say “You don’t deserve this. You are not a person anymore”? I think it’s horrid.

Zara’s comments were echoed by other participants who found universal credit and the subsequent poverty to be dehumanising. In the end, Zara could not afford to keep renting her flat and so relocated to live with family.

Not being able to afford food was a common and stressful experience, particularly for parents who worried about being able to feed their children. The food poverty was continual as the income from participants were receiving from universal credit was not enough to live on. As Bill described:

I’ve never been really hungry before I was on [universal credit] yeah … I’ve been short of things, you know, and like, ‘Oh I might struggle a bit ‘til the end of the week,’ sort of thing. But I have never been, ‘Literally there is nothing in the house and I’m starving,’ you know. And I have lost … nearly four stone in weight.

The serious impact universal credit had for Bill also affected his ability to manage his existing health conditions. Other participants also described weight loss and a reduction in their physical health.

Nearly all participants described a detrimental effect on their mental health since claiming universal credit.

One participant directly linked his suicide attempt to universal credit and his increasing poverty. His recovery was further challenged by his poor physical health as he was unable to manage his diabetes.

A lone parent with a teenage son, Isabel struggled to get by with universal credit, which has negatively impacted her mental health. She even said she was more likely to take her own life than get a job, adding that the low universal credit payment seemed “to punish people and to make our life absolutely impossible”.

I’m not paying all my bills, I’m not paying everything, I’m not eating well. [Universal credit] didn’t do anything but destroy people. Destroy their mental wellbeing and their lives. … I honestly don’t know how people are coping because I know I’m not.

These feeling of desperation were felt by other participants as they attempted to navigate the hurdles of daily life, which were made more difficult by universal credit. The £20 cut will see millions of people at risk of poverty and living a life where you no longer “feel like a person”.

In the UK, Samaritans can be contacted on 116 123 or by email – [email protected] Other similar international helplines can be found here.

Sophia Negus does not work for, consult, own shares in or receive funding from any company or organisation that would benefit from this article, and has disclosed no relevant affiliations beyond their academic appointment.

2021-10-04
Previous Post: Ridley Road: The true story of the East End’s anti-fascist 62 Group
Next Post: Fuel shortages: could the UK switch to E10 petrol be the underlying cause?