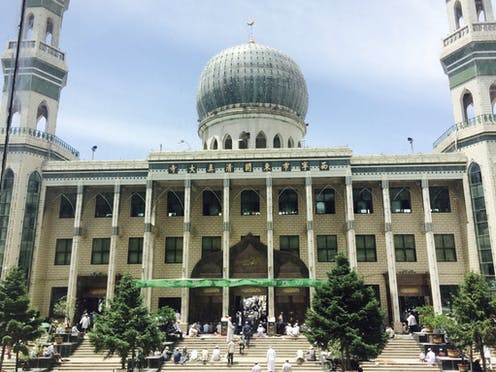 In the normally quiet city of Xining, capital of northwest China’s Qinghai province, everyday interactions between the city’s ethnic groups – Han Chinese, Hui Muslim, Tibetans, Turkic Salars and others – usually pass without conflict or fanfare. But thanks to the municipal government’s controversial demolition of the entrance hall of the city’s famous Dongguan Mosque, one of the largest in China, the city finds itself squarely in the cross-hairs of a nationwide campaign to make Islam more Chinese or “sinicise” it – in official language, “to guide Islam to be compatible with socialism”.

The removal of the “Arabic-style” domes and minarets from the front gate of the mosque has sparked backlash from local residents, and even captured the attention of foreign diplomats. The story of the Dongguan’s renovation signals the expansion of an ongoing crackdown on Islam in China, which has thus far largely been enacted against Uyghurs and other Turkic Muslims.

On July 9 2021, images of a notice from the Xining municipal government announcing the renovation of the front gate of the Dongguan Mosque circulated on social media sites such as Sina Weibo and Zhihu. Similar changes were enacted at the city’s other mosques – at least ten of which stand in the city’s central Chengdong District, alone. Twitter users in Xining documented and shared images of these changes as they swept across the city.

The displeased reaction of the local Hui Muslim community – which comprises 16% of Xining’s population – was palpable. On July 15, a woman wearing a hijab prostrated herself in prayer on the street in front of the mosque while she sobbed. Captured on video, the woman’s lone protest spread online, inspiring a cartoon that went viral.

But protests proved futile. On September 13 a tweet from Christina Scott, the British deputy head of mission to China, who was visiting the city, compared the photo of the building in a recent guidebook which displayed its Arabesque features, to the current state of the building, denuded of its dome and minarets.

The sinicisation of Dongguan Mosque suggests a worrisome trend toward a state-driven, coercive assimilation of Muslim minorities by the ruling Chinese Communist Party.

The demolition of the front gate has happened against the backdrop of a much larger crackdown on Islamic identity unfolding across China. The most notable aspects of this campaign have occurred in the area China refers to as the Xinjiang Uyghur Autonomous Region as a part of the so-called “People’s War on Terror”, a repressive campaign that criminalises many aspects of everyday religious behaviour. Turkic Muslims have been detained in concentration camps, sentenced to lengthy prison terms, and subjected to forced labour.

Read more:
City of lost mosques: how Suzhou tells the story of China’s Islamic past


For Hui communities, this crackdown has resulted in foreclosure of non-state approved expressions of faith. Internal party speeches have likened Islam to a “virus”. It’s this mentality that drives the regime to curtail overtly Islamic architecture in public spaces.

The Nanguan mosque in Yinchuan underwent a similar transformation in 2020. Linxia Hui Autonomous County in Gansu removed loudspeakers (usually used to broadcast the call to prayer) and Arabic signs from mosques in June of 2018. In December of the same year, three mosques in Yunnan were demolished, having been declared “illegal unregistered buildings”.

By late 2019, reports from Henan, and Shandong pointed to the national expansion of the campaign. Even shops and restaurants have seen their Arabic signage sinicised.

The symbolic importance of the Dongguan mosque is hard to understate. Politically, the Dongguan has long represented power within the region. When I visited the area several years ago to research my forthcoming book, Pure and True: The everyday politics of ethnicity for China’s Hui Muslims, one of the people I interviewed referred to the neighbourhood it dominated as the “de-facto Islamic capital of China”. The area is home to countless businesses, restaurants and cultural resources. The mosque provides classes in Arabic and posts collection boxes for donations to charitable projects.

As a place of worship, the Dongguan is the only Yihewani mosque in Xining that holds weekly Friday afternoon prayers. As many as 70,000 people attend in a typical week, spilling out into the street. During Ramadan, more than 200,000 people might gather for Friday prayers, with Eid celebrations drawing as many as 300,000.

Friday prayers at the Dongguan Mosque were seen as prominent examples of cooperation between local government and the mosque. The local government assisted in crowd management by sending traffic officers to direct heavy traffic on the street during prayers.

Even the though the mosque’s front gate, a recent addition built in the early 1990s, is not by any means a “heritage” feature, it still stands as a visible cultural symbol at the community’s heart. The fact that it is being stripped of iconography which visually links it to Islam is jarring. The emotional impact of this decision on community members will undoubtedly be significant.

The future of Islam in Hui communities

To date, sinicisation has been met with little resistance. In August 2018, in rural Weizhou township, east of Qinghai, the proposed demolition of the community’s Grand Mosque sparked demonstrations by the clergy in protest. While the building was ultimately spared from total demolition, it’s “Arabian-style” architectural features were sinicised, its dome removed and remodelled with a Chinese-style roof.

On my visit in early 2016, residents of Weizhou expressed pride in their mosque as a sign of their community’s ascent to moderate prosperity from the depths of rural poverty. The demonstrations of 2018 spoke to the residents’ shock that their symbol of successful cooperation with the state could be targeted for demolition.

As the sinicisation campaign arrives on the doorstep of China’s most prominent and culturally important mosque, such sentiments of discontent will only magnify. In enacting aggressive measures of standardisation the party threatens to undermine the stability it seeks to preserve. The demolition of the front gate prompted frustration and mobilisation, suggesting that strong currents of dissatisfaction run beneath the surface.

David R. Stroup has received funding from the Fulbright Foundation.

2021-09-28
Previous Post: Cold showers are said to be good for you – here’s what the evidence shows
Next Post: The music industry is booming and can afford to give artists a fairer deal